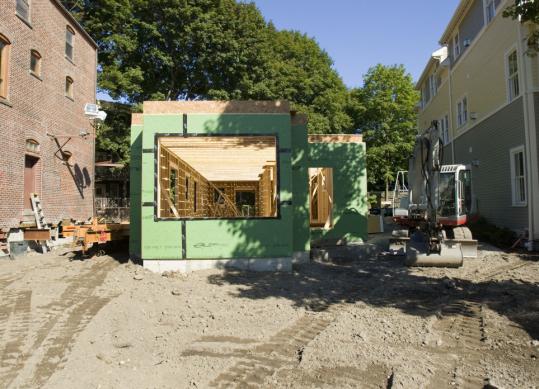 This Jamaica Plain property on Meehan Stree twas purchased from the city for less than $1,000 and later sold for a large profit. (Dina Rudick/ Globe Staff)
By Donovan Slack Globe Staff / September 7, 2009

Buyers of discounted city-owned land have greatly profited from the deals in at least two cases, despite restrictions against for-profit development of the lots, according to property records.

Records show that Mayor Thomas M. Menino approved the sale of a Jamaica Plain parcel for $500 in 2001 to a neighboring homeowner who then sold it along with two adjacent parcels for $675,000. In another case several blocks away, the mayor signed off on the sale of a lot for $750 to a buyer who quickly sold it for an estimated $20,000. The buyer then built condominiums on the land and sold them for a total of $894,000.

The cheap sale of city-owned land became an issue in the mayoral race last week, when one of Menino’s challengers, South End businessman Kevin McCrea, accused the mayor of giving taxpayers a raw deal in the transactions. The Boston Globe subsequently reported that Menino, since he took office in 1993, approved the sale of 642 parcels at prices ranging from $500 to $1,000 in an effort to get the land back on the tax rolls.

City officials last week noted the restriction on buyers profiting from the sales when they defended the land deals last week. The review of property records found that not only have buyers profited, but in some cases, such as the $500 Jamaica Plain parcel, the Menino administration agreed to amend the deeds to allow for development.

Lucy Warsh, spokeswoman for the Department of Neighborhood Development, called the cases “oversights’’ and said that in general, buyers of the discounted city lots adhere to the deed restrictions.

“Although our land disposition process is consistent as a whole, clearly there have been exceptions along the way where for a variety of reasons, neighbors have purchased a city lot and used it for purposes beyond what the deed stipulated,’’ she said in a phone interview.

Both Jamaica Plain sales were part of the city’s Yard Sale program, in which lots are sold to neighboring homeowners for $1,000 or less, regardless of their size.

The $500 lot that was sold in 2001, a 1,666-square-foot parcel on Meehan Street, went to abutter John Sakowski. The deed limited construction on the lot to small structures such as a garden shed or parking garage. But after Sakowski sold the lot and two adjacent parcels for $675,000 in 2007, the new owners laid plans to build a condominium development. The following year, the city amended the original property deed to remove the construction restriction.

“The current owner now wishes to construct, and the Department of Neighborhood Development of the City of Boston has no objection to said construction of a building,’’ reads the amendment signed by the department’s assistant director, Mary T. Flaherty. “The City of Boston releases all its rights and interests in the deed restrictions.’’

Neighbors, however, weren’t so keen on the proposed development, a three-building complex and parking lot that would have required demolishing a century-old stable built by the founder of Doyle’s Café, which was adjacent to the formerly city-owned parcel.

At a community meeting in March 2008, Warsh told attendees that the city had made a mistake by allowing the development to go forward without first checking with neighbors.

“DND is now looking into the legality of reversing that deed amendment,’’ she said, according to a report in the Jamaica Plain Gazette.

On Saturday, Warsh said that what the city learned during its investigation was that the amendment was irreversible. She said the department subsequently worked with neighbors and the developers, Peter Bourassa and Michael A. Burke, to downsize their project and preserve the historic building.

In the other case, the city sold a 3,492-square-foot parcel on Dalrymple Street to abutting homeowner Amada Mena Felix in April 1996. Felix got the plot for $750; its assessed value at the time was $22,000.

Within a year, she sold the land, along with her own home, for $151,000. Felix’s home had an assessed value at the time of $130,000, records show. The new owner, Domingo Morales, received city permits six years later to build a three-family house on the land, despite restrictions on the deed for the formerly city-owned parcel that prohibited construction of a home.

In addition to the Inspectional Services Department, which issued the building permit, the Boston Redevelopment Authority and the city’s Zoning Board of Appeal signed off on the development.

The Board of Appeal noted in its approval that Morales had cited a need for affordable housing in the area. After construction was completed, Morales quickly sold one unit for $305,000 and another for $299,000, records show.

In all, according to an estimate on the building permit, Morales spent $410,000 on construction and took in a total of $894,000 for the condominiums.

Warsh, of the Department of Neighborhood Development, said she was not versed on the details of the case but said it appeared to have been the product of miscommunication between city agencies.

She said the department’s director, Evelyn Friedman, who was appointed by Menino last year, is reviewing the city land-sale program, along with other initiatives.

“She’s continuing to look for ways to improve policies, such as our land-disposition process,’’ Warsh said.