Not in their (beach)front yards 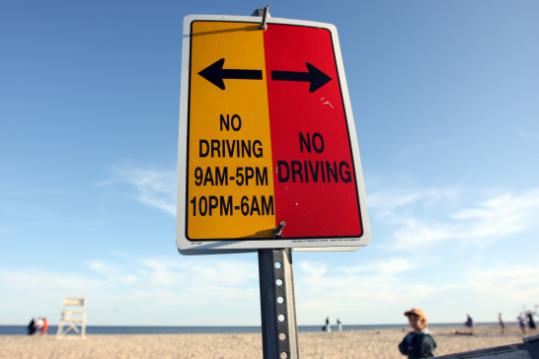 NANTUCKET - Unlike a lot of beach destinations in New England, Nantucket prides itself in making its shore wide open to the public. Walking the dog at any hour? Folks here tend to turn a blind eye. Sunbathing on the beach in front of private homes? Not a problem.

But owners of 10 oceanfront cottages have drawn a line in the sand when it comes to driving over their beaches, swaths of privately owned sand wedged among public sections of popular Surfside Beach. They asked the town to prohibit vehicles from crossing their properties, and this season it did.

The ban has gone over as well as a used car dealership on Straight Wharf. On this island, the very thought of new restrictions on shore access evokes fears of barbed wire and seawalls separating beaches from beachgoers. This month, officials will ask voters for the authority to let drivers back on the section of Surfside Beach.

Looming behind the dispute is the larger question of whether public access to private beaches is a right everyone on Nantucket should have. Most of the roughly 82 miles of beaches that ring the island are privately owned properties. So many owners allow public access that some islanders take it for granted that the beaches are theirs.

Centuries-old state law says oceanfront property owners must allow passage to anyone fishing, hunting fowl, or navigating between the waterlines of mean high tide and mean low tide. The law says nothing about the right to sunbathe or swim on private property, though people do it all the time on Nantucket. And it says nothing about driving.

“People in authority actually think beaches are public,’’ said James E. Mullen of Holland, Pa., one of the owners whose properties extend to the waterline at mean low tide of Surfside Beach. “They’re private, at least our beaches.’’

That view runs counter to Nantucket’s vision of what officials call One Big Beach, a program that coaxes owners to grant public access on their sections of sand in return for tax incentives and a pledge by island authorities to manage and have police patrol their beaches.

One Big Beach “preserves Nantucket’s policy of having a beach that is open to everybody,’’ said Allen Reinhard, a selectman who wears a belt buckle engraved with the island’s image. “It’s really a part of the culture here, and the history and the practice.’’

At a town meeting set for Sept. 21, selectmen will ask voters for the authority to invoke eminent domain to reopen the stretch of Surfside Beach to drivers, an unheard-of use of this power on the island, according to Andrew V. Vorce, the island’s director of planning. The town would not take the property, but it would take an easement - essentially giving itself permission to restore the previous rules: open 5 p.m. to 10 p.m. to vehicles with beach permits.

Surfside Beach is one of the few areas on Nantucket where the town allows beach driving during the summer months (not every beach is flat and wide enough for vehicles), and the 10 stretches belonging to the owners are in the middle of a popular route from a public beach access road to a celebrated fishing ground, Point of Breakers.

The beach houses owned by Mullen and the others are hardly sumptuous mansions. The modest, weathered-shingle cottages sit at the edge of dunes studded with sparse, silvery beach grass that stretch several hundred feet to the beach. Their lots of beach occupy about 500 feet of shoreline, Vorce said. On a recent afternoon, dozens of vacationers lounged on the fine sand, as oblivious to the fact that they had drifted onto private property as they were to the advancing fog that gives the island one of its nicknames, the “Gray Lady.’’ Etched in the sand was evidence of more deliberate scofflaws: the thick tracks of four-wheel drive vehicles. On Wednesday, at least one sport utility vehicle was seen navigating the restricted area.

Erosion is not the problem here - Surfside beach has actually grown hundreds of feet over the years. Nor is trespassing: Mullen, whose family has owned his cottage since 1941, said he and other owners do not mind sunbathers and fishing enthusiasts using their property as long as they come on foot. Vehicles that bring parties, illegal bonfires, and drinking onto the beach, he said, are the problem.

“There are two issues: safety and the reality of ownership,’’ said Mullen. “Most [drivers] are well behaved, but there’s always one or two who ruin it for everyone, and it’s just unsafe to have vehicles there with all those people.’’

Relations between the owners and beach drivers have long been testy; both sides report abusive exchanges, and one cottage owner was reportedly arrested in 1998 for striking a vehicle with a large stick. It only got worse after the ban was enforced this year.

Nantucket resident Jan Metcalf was surf casting for bluefish on Point of Breakers on Wednesday evening with her husband, Edward. She said she had been driving there from the access road for more than 40 years until May, when an owner told her and her husband to turn around and go back.

“It’s a group of people who have taken charge of something that should be used by everyone,’’ said Metcalf, who arrived on Point of Breakers via a different route.

Another frequent fisher, Tom Thomas of Doylestown, Pa., who owns a summer home up the shoreline, said he had been driving to Point of Breakers since 1957. After he was stopped by police and ticketed in July for driving on the restricted area, Thomas wrote a letter to the local paper instead of paying the $50 fine.

“It’s not the fifty bucks, but the fact that it changes my vacation experience,’’ Thomas said.

Selectmen responded to the complaint by calling the Sept. 21 meeting.

The easement, said Brian Chadwick, a selectman and retired police officer who supports the measure, would be about more than allowing fishermen to drive on the beach. He hopes it would set a precedent.

“Our kids won’t have to go through these same battles if the next generation that buys these houses all of a sudden wants to put up fences and private property signs,’’ he said, adding that he believes voters will approve the measure. “That’s the longer-range vision.’’

But others, chief among them the property owners in the dispute, say islanders have an outsized view of their access rights.

“There is a sense that the actions of some people - largely summer people - have eroded previously existing public rights,’’ said Arthur Reade, the Nantucket lawyer representing the owners of the 10 properties at Surfside Beach. “What is being cast as infringement of long-term rights is not necessarily right from a legal point of view. It’s island legend.’’

Reade said that if the town takes the easement, a court will set the compensation for the owners.

Mullen had different figures in mind.

“They’ll be spending millions to compensate us,’’ he said.

Whatever happens, Chadwick said as he walked Surfside Beach with his Shih-poo, Millie, past a no-dogs-allowed sign, another time-honored Nantucket tradition will soon come into play. The summer folks will leave, he said, and “the beaches will be ours again.’’