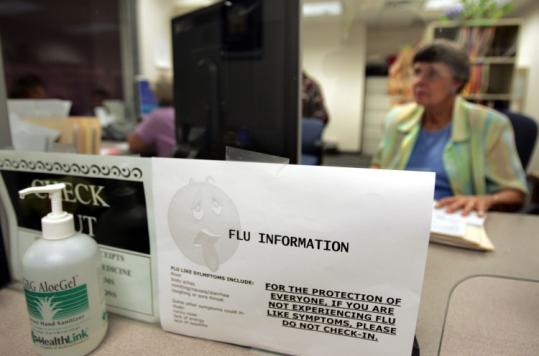 A bottle of hand sanitizer and a sign about swine flu sat at a window last week in front of Marilyn Hallam at the health center at Texas Christian University in Fort Worth. (Mike Fuentes/Associated Press)
By Stephen Smith Globe Staff / September 5, 2009

With thousands of college students flooding New England campuses this week, universities are taking unprecedented measures to contain possible outbreaks of influenza, knowing that young adults sit squarely in the bull’s-eye of susceptibility to swine flu.

The new and swiftly spreading flu strain is already spawning waves of illness at Southern universities that began classes last month. And with a swine flu vaccine not expected to land at campus clinics until mid-October at the soonest, university leaders in Massachusetts are weighing a range of precautions, from isolating feverish students in makeshift sick bays to canceling hallowed traditions such as ice cream socials.

At Boston University, five dozen dorm rooms have been reserved for coughing, aching, shivering students beset by the flu - and if things get really bad, a barracks-style infirmary will arise on a stretch of gymnasium floor.

At Emerson College, ailing stu dents confined to their quarters will have food delivered to their door in the form of Feeling Blue Meals - for breakfast, it’s oatmeal, toast, and juice.

At Mount Holyoke College, students are being advised that if they fall ill, hail from within 250 miles, and can catch a ride, there’s one place they should head - home to their parents.

“We’re expecting we are going to see an influx of sick people as more and more come on campus,’’ said Dr. David Rosenthal, director of health services at Harvard University, whose Longwood medical campus recorded Boston’s first cases of swine flu last April. “There’s a lot of fervor out there, and what we’re trying to do is prepare for the worst but keep people as calm as possible.’’

At Harvard and other colleges in the Northeast, where classes usually resume after Labor Day, the threat of flu-addled students has not yet become reality. But at Emory University in Atlanta, at least 50 sick students have been consigned to a dorm left vacant to shelter the ailing.

And at the University of Virginia, the health service had diagnosed 27 students with flu by Thursday. That stunned Dr. James Turner, director of Virginia’s Department of Student Health, who has spent 25 years tending to students on college campuses. “I’ve never seen a flu season ever in September,’’ said Turner, who is also president of the American College Health Association. “I use the word ‘explosive’ to describe it. I don’t recall flu that appears and spreads so rapidly.’’

Federal disease trackers have found that children and young adults between 5 and 24 years old have endured the highest rate of infection by the H1N1 virus that causes swine flu. But unlike the aged - regarded as most prone to the complications of seasonal flu strains and, thus, most willingly vaccinated - young adults are notoriously unreceptive to entreaties about health prevention.

That’s true, even though they dwell in hothouses of flu migration: dorms and cramped off-campus apartments.

“A key problem is that people of that age group do not think they are vulnerable - they don’t think anything is going to get them,’’ said Dr. Anne Schuchat, a flu specialist at the US Centers for Disease Control and Prevention.

That has presented a challenge to Kris Sheedy, whose job at the CDC is crafting prevention campaigns.

Just the other day, one of Sheedy’s associates was in a recording studio, experimenting with a public service announcement aimed at college students.

“It was sort of like: ‘Knock, knock, knock. Who’s there?’ ‘Hi, it’s me, influenza. H1N1 influenza. I’m here to ruin all your plans. You know that great date you have scheduled for Saturday night? Ruined,’ ’’ Sheedy recalled.

“Will that capture their attention? We don’t know.’’

Students appear to be paying attention on BU’s bustling campus, where the signposts of flu prevention are everywhere.

When students headed to the dining hall yesterday, many made the hand sanitizer dispenser their first stop - for a dollop of precaution. And when they go to class, their professors talk about the flu.

“They tell us, ‘If you feel sick, don’t come to class and go to student health services,’ ’’ said sophomore Shadane Harris, who like students across the nation received a memo about flu precautions during the summer.

Wellesley College urged parents to make sure their daughters packed more than argyles and iPods.

“We told them to pack a flu kit,’’ said Michelle Lepore, Wellesley’s associate dean of students. “We sent a note home to parents and said it’s really important that your students have digital thermometers, ibuprofen, acetaminophen, alcohol-based hand sanitizer.’’

If they’re not prepared, the universities are, having assembled caches of flu supplies. BU purchased 5,000 thermometers and 2,040 small containers of Purell.

Swine flu has spread swiftly among the young, but most cases have not required hospitalization.

Fearing that several students could be sick for a few days at a time, administrators are beseeching professors to forgo demands for a doctor’s note, so that students with relatively mild flu cases won’t clog clinics - or spread their germs.

“We’re asking the faculty to give them a break, trust them for the time being until we know what we’re up against,’’ said Peter Fiedler, BU’s vice president for administrative services.

At Harvard, a memo to members of the Faculty of Arts and Sciences urged them to consider delivering their lectures online if there is a severe outbreak.

Some schools have designated space for ill students. At Mount Holyoke, 15 beds are being set aside and, if demand outstrips supply, wings in two dorms will be devoted to the sick.

But the University of Massachusetts at Amherst has no excess capacity, so students are being asked to live by an altruistic code: If you’re sick, stay in your room so you don’t make others ill. If you’re healthy, deliver food to those who aren’t.

“We’re calling it ‘flu buddy,’ ’’ said Ann Becker, a public health nurse at UMass, where nurses will be available round the clock to provide advice over the telephone.

Such measures, university doctors and nurses said, are especially critical while drug companies are still brewing a swine flu vaccine.

At the Massachusetts Institute of Technology, 9,000 doses of vaccine against seasonal flu will arrive soon. Assuming that swine flu vaccines prove safe and effective in ongoing trials, MIT may dispense 30,000 to 40,000 vaccinations in the coming months. Dr. David Diamond, associate medical director at MIT’s health service, described that as “an extraordinary effort’’ that is both necessary and expensive.

“Hopefully, if the outbreak hasn’t gone through our community yet, [vaccines] will blunt or prevent a serious outbreak,’’ said Diamond, whose son is an MIT freshman.