It was Bill McCall’s idea, and everybody thought he was nuts.

He was standing in Post Office Square, watching workers and bankers and lawyers and secretaries spill out of the surrounding office buildings and spread across the grass for lunch or just a brief respite from the four walls and cubicles and phone calls and utter boredom and utter chaos of a work day.

“There were guys in suits, and women in dresses, and some of them were spreading newspaper to sit down and it just occurred to me, we should do something so more people can sit on the grass,’’ said Bill McCall, a Holy Cross guy who made his name and money in real estate.

So, at the next meeting of the people who oversee the urban oasis in Post Office Square that is known as Norman Leventhal Park, Bill McCall suggested they buy a bunch of cushions and make them available to people who use the park.

There was silence. And then everybody around the table looked at each other and wondered if Bill McCall, their chairman, had completely lost his marbles.

This is, after all, Boston. A place where people would steal a hot stove, then come back for the smoke.

But they humored Bill McCall and they bought a bunch of green cushions.

That was 10 years ago. In all that time, not one of those cushions has been stolen. And almost everybody picks up the cushions when they’re finished with them and puts them back in the wooden container that holds them.

“I’d say 99 percent of the people put them back,’’ Gene Lobkov, a park ranger who has patrolled Post Office Square for eight years, and who hails from Russia, the place Norman Leventhal’s father left a century ago.

Gene Lobkov used to work at a shopping plaza in Chelsea.

“Two years, no one brought a shopping cart back to where they were asked,’’ he said. “Here, people would look at you funny if you left a cushion behind.’’

To fully appreciate how special Norman Leventhal Park is, you would have had to have seen, and smelled, the above-ground monstrosity it replaced. It was a concrete eyesore in the middle of the Financial District, a spot to walk briskly past. A considerable number of those who lingered did so only to relieve themselves against Frank Sawyer’s old, ugly parking garage.

The park is named for a great Bostonian who is a mensch and a treasure and, thank God, still with us. Norman Leventhal turned 92 the other day, and here’s hoping he makes 102.

Some of the most striking buildings in this town, from Rowes Wharf to Center Plaza, are the physical manifestations of Norman Leventhal’s extraordinary vision. And it is only right and fitting that the people who use the park named after him would treat it with the respect that he has afforded the city where his footprint looms large.

Norman grew up poor on Wolcott Street in Dorchester and almost everything he accomplished in this life was because he ignored the cynics and the haters.

Norman’s son, Alan, was sitting in the park the other day and smiled, watching people rise from the far end to weave their way back to the wooden cushion holder.

“The park belongs to them,’’ Alan Leventhal said, pointing to the people who sprawled on the grass and sat on the benches. “That’s why they treat it so well. There’s a metaphor in all this. If you appeal to people’s better instincts, they respond accordingly.’’

Dominic Spinola works at a computer company on Franklin Street and he’s been coming to the park for years. Stealing a cushion or failing to put one back, he said, would insult everyone, including the person doing it.

“You’d have to be a loser,’’ Dominic Spinola said. “People who come here, they don’t just bring their lunch. They bring respect.’’ 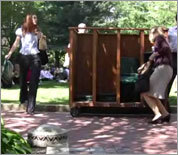 Visitors to the park place the free cushions back after using them.
Your comment is subject to the rules of our Posting Policy
This comment may appear on your public profile. Public Profile FAQ