A cultural remix in West Roxbury 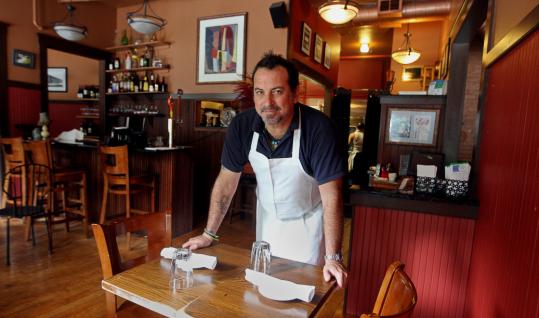 For years, the new labels went to its neighbors.

Jamaica Plain was the spot for young hipsters seeking a tolerant environment. Roslindale was the ethnic melting pot with blue collar roots that young families could afford. But West Roxbury? West Roxbury was what it always had been, a suburban enclave in the city where lace-curtain Irish had settled and never left.

But as expensive real estate has forced a steady migration from Boston’s core, the diaspora has reached this outlier neighborhood, carrying with it couples like Drew Bartley and Chris Norris, formerly of the South End.

“On one of our first days in the neighborhood, our neighbor, who’s been here forever, walks up to us,’’ said Norris, an affordable housing advocate who scooped up a four-bedroom Victorian with his partner Bartley, a genealogist, on a block where the number of newcomers rivals that of old-timers. “And she says, ‘Welcome to the neighborhood. Boys, don’t you worry about a thing. My daughter is a lesbian.’ ’’

The influx is not just a story of neighborhood change, but a period marker. West Roxbury was a vestige of an older Boston, a place where hundreds descended on the Irish Social Club every Sunday night for Irish step dancing, where candlepin bowling and Catholic Memorial School hockey games were part of the elemental framework of social life. The multitudes of police, firefighters, and other city employees who settled in traditional brick houses made it a stronghold of city politics, and a foil to the younger, more transient populations moving into other neighborhoods. Distant from the city center, lacking a T stop, and suffused with a brand of insularity, West Roxbury long resisted the change that enveloped other Boston neighborhoods.

There was Melinda Keehnle on a recent evening, walking home from Roche Bros. grocery store, as she has always done. The 50-year-old nurse can still be found at the West Roxbury Pub on Friday nights, leading karaoke renditions of old Irish songs, surrounded by the regular crowd.

But other nights, she samples her neighborhood’s new fare.

“I have seven restaurants within two blocks of my house,’’ Keehnle said.

“When I go out on my porch, I can smell Indian and Thai and fresh seafood and burgers. You name it.’’

Centre Street - once a strip of pizza joints and Irish pubs - is now a hub of ethnic restaurants including Lebanese, Greek, and Italian offerings. There is an upscale bistro, a trendy bakery, a gourmet sandwich shop. Gone is Fontaine’s, the fried chicken joint that boasted West Roxbury’s arguably most famous landmark, the 9-foot-tall neon chicken figure that flapped a wing over the VFW Parkway, supplanted by an Italian steakhouse, Sofia.

City Councilor John M. Tobin Jr., who grew up in West Roxbury and represents the district, says he knew something was afoot when the restaurant West on Centre, with its exposed brick walls and sleek gray banquettes, opened doors in 2004 on the previous location of Buck Mulligan’s, an Irish pub.

“I remember walking into the place, and it was breathtaking,’’ Tobin said. “It was just something you had never seen before in West Roxbury. It was something you’d see on Newbury Street or in the South End.’’

As other restaurants and stores followed, West Roxbury’s staid reputation began falling away, and soon, a pattern took hold - new residents craved the amenities of neighborhoods they had been priced out of, and more new businesses stepped into the void to supply them.

“There was no Indian restaurant in West Roxbury,’’ said Kabin Bhujel, manager of the Himalayan Bistro, a recently opened Indian and Nepalese restaurant. “That is why we came here.’’

Some of this new population is made up of parents seeking green space for their children and short commutes into the city - people like Judy Moroz and her husband, transplants from New York.

“I have family come to visit from more chichi towns and I am proud of the way that West Roxbury has some fun shops and some old shops,’’ said Moroz, on a recent afternoon, wearing unlaced Converse tennis shoes and chunky glasses as she pushed her daughter’s stroller into Centre Street’s . “I like the way that it reflects the community.’’

There is also a growing number of gay and lesbian couples, like Bartley and Norris, who say the neighborhood additions - such as Centre Street’s newly opened Boomerangs, a resale shop that gives proceeds to the AIDS Action Committee of Massachusetts - have underscored its accepting atmosphere.

“AIDS Action in West Roxbury.’’ said Norris. “Who would have thunk?’’

To be sure, old West Roxbury pokes out here and there. Centre Street is dotted with storefronts like Anna’s Hand Cut Donuts, famed for its chocolate glazed. A house’s location is often described by the its parish. A lifetime spent in West Roxbury is not uncommon; nor is a family that has been there for generations. The elderly are still well represented, making up some 20 percent of the population compared with Boston’s 10 percent. But as assisted living facilities have opened, seniors have moved from their longtime homes, freeing up properties that have been bought by newcomers.

For some, the changes have come too fast and furious.

“It’s just not like it was when we were growing up,’’ said Maura Shurtleff on a recent afternoon as she sat on the stoop of the house where she was raised and where she and her husband live with their children. “It makes me feel cautious.’’

But many say that even among newcomers, a sense of traditionalism pervades - a settled quality that breeds a kind of contentedness. The at-rest mentality has helped Manny Sifnugel cultivate loyal customers - residents who do not desert his restaurant’s tuna ceviche and Argentine steak and yucca fries in favor of newer hot spots.

“People in West Roxbury are not chasing anything anymore,’’ said Sifnugel, who opened Masona Grill after closing his Clarendon Grill in the South End.’’ Once they get here, they’ve got what they want.’’