The torch has been passed, but who will bear it?

Next generation of Kennedys displays range of talents, yet it’s unclear if this is end of a dynasty 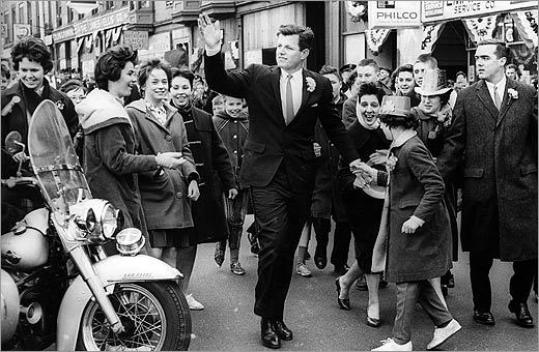 Sooner or later, every political dynasty faces this question: Who are we now?

With the death of its patriarch, that moment has arrived for the Kennedy family. And so a clan that has been defined by the public offices it held must now set a future course without the standard-bearer for its political tradition, Senator Edward M. Kennedy.

It would be premature to declare an end to that tradition - speculation is rampant that the senator’s nephew, former US Representative Joseph P. Kennedy 2d, or widow, Victoria Reggie Kennedy, would run for his seat - but some observers predict a quiet transformation in the family’s identity now that its charismatic leader is gone.

“I have a feeling that many of them are going to opt for making contributions in fields other than politics,’’ said Philip W. Johnston, chairman of the board of the Robert F. Kennedy Center for Justice & Human Rights and former head of the Massachusetts Democratic Party. “They believe that there are many ways to make a contribution, and one doesn’t need to be in elective office to make a difference in the world.’’

To a large extent, that path is already being trodden by many of Kennedy’s two-dozen-plus nieces and nephews, who - with their uncle’s encouragement - have fanned out across the nonprofit, charitable, or private sectors.

Rory Kennedy, the daughter of Robert F. Kennedy and Ethel Kennedy, is a respected documentary filmmaker, while her sister, Kathleen Kennedy Townsend, who served as lieutenant governor of Maryland before making an unsuccessful gubernatorial run in 2002, teaches at Georgetown University’s School of Public Policy. Their brother, Robert F. Kennedy Jr., is an environmental lawyer, author, and radio host. Anthony K. Shriver, the son of Sargent Shriver and Eunice Kennedy, runs Best Buddies, a nonprofit for developmentally disabled people. Maria Shriver, a TV journalist turned author, is married to the Republican governor of California, Arnold Schwarzenegger.

Of the three children of Ted Kennedy and his former wife, Joan, only their son Patrick, a Rhode Island congressman, is in politics. Kara Kennedy worked for Very Special Arts (now known as VSA Arts), a nonprofit that promotes access to the arts for the disabled, while Edward M. Kennedy Jr., after working as a lawyer specializing in disability issues, founded a Wall Street investment firm.

For political junkies who have made a parlor game of guessing which Kennedy will run next, and for what office, it may be hard, even unfathomable, to accept the idea of them as primarily a family of private citizens, albeit public-spirited ones.

Yet the cold reality is that when analysts look up and down the Kennedy bench these days, they don’t see a wealth of political talent - an assessment solidified by Caroline Kennedy’s struggles during her brief interest in filling a US Senate seat from New York (she withdrew in January).

“Slowly fade away: That’s what dynasties tend to do,’’ said Thomas Whalen, a political historian at Boston University and author of “A Higher Purpose: Profiles in Presidential Courage.’’ “That’s what happened to the Lodges, whom the Kennedys overcame.’’ (In 1952, John F. Kennedy wrested a US Senate seat away from Henry Cabot Lodge Jr., whom he later appointed as ambassador to South Vietnam).

Even in Massachusetts, where Kennedys have served in Congress for all but two of the last 62 years, analysts say any family members trying to follow in Ted Kennedy’s footsteps may confront a new skepticism about dynasties.

“There might be enough goodwill, enough romance and nostalgia and so forth, to carry (a Kennedy) into office,’’ said Edward T. O’Donnell, a historian at Holy Cross who specializes in politics. “But the electorate could decide that this is the time to make a break. Leave the Kennedy phenomenon on a high note.’’

Even while he was alive, Ted Kennedy proved to be a hard act to follow. H.W. Brands, a historian at the University of Texas, said Caroline Kennedy’s aborted attempt at a Senate seat illustrated the burden of expectations any Kennedy carries into a political race. “You have no chance to make mistakes off-Broadway, so to speak,’’ observed Brands. “You’re going to be center stage right away.’’

What does history suggest about the fate of family political dynasties when the standard-bearer dies or leaves office?

Sometimes, a complicated stew of rivalries is the result. Brands, the author of “Traitor to his Class: The Privileged Life and Radical Presidency of Franklin Delano Roosevelt,’’ said there was “an ugly split’’ in the Roosevelt family when Theodore Roosevelt died in 1919. Franklin, Teddy’s cousin, quickly moved to establish himself as the family leader, irritating Theodore Roosevelt Jr. There was a period, Brands said, when the “Oyster Bay Roosevelts’’ (the Republican, Teddy-led side of the family) and the “Hyde Park Roosevelts’’ (the Democratic, FDR-led side) did not speak to one another.

In 1924, Eleanor Roosevelt went so far as to campaign against Theodore Roosevelt Jr. when he ran for governor of New York. “I haven’t seen one Kennedy campaigning against another,’’ noted Brands. (Though family members did line up on opposite sides during last year’s presidential race, with Ted Kennedy and Caroline Kennedy supporting Barack Obama and Kathleen Kennedy Townsend, Robert F. Kennedy Jr., and Kerry Kennedy backing Hillary Clinton.)

The issue of family political dynasties has been much talked about in recent years, but most of the talk has focused on two families not named Kennedy: the Bushes and the Clintons. Either a Bush or a Clinton occupied the White House from 1988 to 2008, and it became an issue during Hillary Clinton’s presidential campaign last year.

That suggests the idea of the family political dynasty has not yet run out of steam. Whether the Kennedys decide to test that proposition, or retreat into a more private life, will be answered in the months and years ahead. Johnston, for one, hopes that whatever road they travel, it will be under a lighter load.

“Many of them sometimes feel they haven’t succeeded if they haven’t made some major contribution to public life,’’ said Johnston. “And I feel bad for them.

“It’s unfair to think of them as one entity,’’ he added. “They’re individuals. Particularly for the next generation of Kennedys, or maybe the next couple of generations, the family should do what makes them happy as individuals.’’