A quarreling, cajoling force with presidents

Senator sought to leverage power of government to assist needy 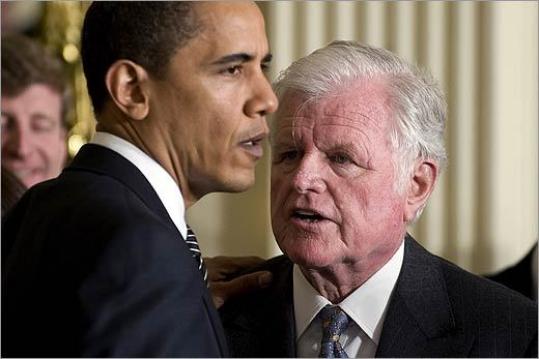 WASHINGTON - Senator Edward M. Kennedy - ailing from cancer but beaming at his success in passing a national service law - stood behind the curtain at a Washington, D.C., elementary school in March, an aide ready to help him on stage for a ceremony heralding the new law.

President Obama, a backstage observer recalled, practically pushed a Kennedy staffer aside, grasping the senator’s briefing book and gently guiding the 77-year-old senator up the small set of stairs to the stage. And as former President Clinton stood to the side, Obama lauded Kennedy for his work on the national service bill that carried Kennedy’s name.

“It is fitting that this legislation is named after Ted Kennedy, a person who has never stopped asking what he could do for his country,’’ Obama said.

The clear deference shown by Obama reflected the Massachusetts senator’s unusual importance in the presidencies that have spanned his 47-year tenure in the Senate. Whether as a crucial ally or formidable opponent, Kennedy - who tried and failed to win the presidency himself - helped shape the histories of all who served in the White House during his Senate years.

He was the younger brother to the first president of his Senate career, and even long after John F. Kennedy’s death in 1963, Ted Kennedy referred to him in interviews as “President Kennedy,’’ and not “Jack’’ or “my brother.’’ The hand-written note John F. Kennedy wrote to his mother in 1932, asking whether he could be Ted’s godfather, hung in Kennedy’s inner office for many years.

As a young lawmaker and determined liberal, Kennedy was a frequent irritant to President Nixon, who was so suspicious of the senator that he contemplated a scheme to plant Secret Service agents to collect information about Kennedy as they protected him.

President Carter learned that sharing a political affiliation did not spare him from Kennedy’s disdain; the senator was a frequent critic of Carter’s health care proposals and took the audacious move of challenging Carter - unsuccessfully - for the Democratic nomination in 1980.

Kennedy tussled with Ronald Reagan, felling one of his Supreme Court nominees, Robert Bork, and he had mixed relationships with the three presidents to follow: George H.W. Bush, Clinton, and George W. Bush.

Much of Kennedy’s relationship with commanders-in-chief was driven by how much cooperation the senator received in driving a liberal agenda, said Robert Dallek, a presidential historian and author of many books on presidents. But Kennedy also became more adept over the years at finding common ground with leaders whose overall policies he opposed.

“His commitment was to the continuing use of federal authority to serve the least advantaged members of society. Regardless of who the president was, that’s the measure that he used to deal with these various presidents,’’ Dallek said.

“He also learned that in politics, accommodation - if you wanted to get things done - had to be part of the equation,’’ Dallek said.

Kennedy had run-ins with presidents earlier in his career. His opposition to the Vietnam War was a source of aggravation for Lyndon Johnson. Kennedy was a vocal opponent of Nixon’s health care plan - although Kennedy mused a few years ago that it might have been better to take the opportunity to do health care with Nixon, fixing the details later. Jimmy Carter was too conservative a Democrat for Kennedy’s tastes.

But Kennedy eventually learned how to play presidents to his policy advantage, even while fighting them on other issues. He worked with George H.W. Bush on the Americans With Disabilities Act (and the elder Bush issued a rare public statement in late July marking the 19th anniversary of the law). With Bush’s son, George W. Bush, Kennedy won passage of the No Child Left Behind law.

Kennedy and Clinton shared many common legislative goals, and the two men and their wives developed a personal relationship. The Clintons sailed with the Kennedys on Cape Cod during their vacations, and Kennedy advised then-Senator Hillary Clinton on how to navigate the Senate. But the relationship soured after Kennedy endorsed Obama in the 2008 Democratic primary, a move that angered Bill Clinton and delivered critical support to Obama.

Obama may not have initially expected a close relationship with Kennedy: In a 2004 interview with the Globe, then-state legislator Obama did not mention Kennedy when asked which sitting senators he admired.

But the two developed a strong partnership. Kennedy said he saw reflections of his brothers in the young Chicago lawyer, and Obama quickly developed a respect and affection for the senior lawmaker. Even as president, Obama behaved with an unusual level of deference to a man he outranked politically.

At Kennedy’s 77th birthday party - a lavish and star-studded affair at the Kennedy Center in Washington - the president lauded Kennedy in a decidedly un-Washington way. Without making any remarks, which immediately would have made Obama, and not Kennedy, the focus of the evening, the president walked onstage, looked up to Kennedy’s box, and lifted his arms.

Obama led the crowd in “Happy Birthday, Dear Teddy.’’ Then he walked off stage.

From Johnson to Obama: Kennedy's relationship with presidents