Caught up in a cartoon controversy

Mohammed images that stirred ire in ’05 omitted from book 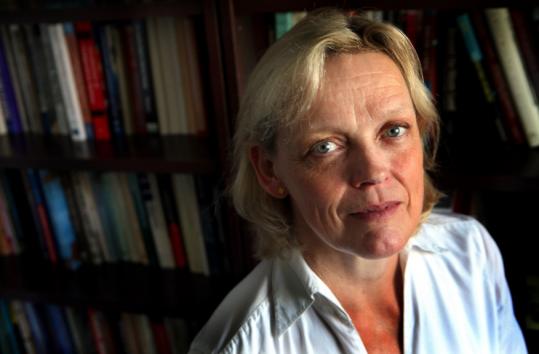 Jytte Klausen, who has been at Brandeis University for 17 years, argued against Yale’s decision to cut the cartoons from her book. (Michele Mcdonald for The Boston Globe)
By James F. Smith Globe Staff / August 22, 2009

Four years after the publication of 12 cartoons depicting the Prophet Mohammed triggered boycotts and deadly violence, Yale’s decision to cut them from Klausen’s book has set off a second wave of arguments.

At the center of the controversy is a scholarly, footnoted manuscript by a respected academic who set out to explain how the original publication of the cartoons in a Danish newspaper in 2005 led to unrest that took more than 200 lives.

Klausen argued against Yale’s decision, but in the end grudgingly acquiesced, in the face of Yale’s insistence that more bloodshed would be likely to follow republication of the cartoons.

But she did not agree when Yale went further, editing out historical artworks showing the seventh-century Prophet. Many Muslims object to any depiction of Mohammed.

The book will appear with an author’s note from Klausen, who says Yale’s decision is a violation of academic freedom and a case of “anticipatory fear on the part of the university of consequences that it only dimly perceives.’’

“The metaphor I use is the monster in the woods: You can’t see it at night but you know it’s there, and if you provoke the monster, it’s your responsibility,’’ she said in an interview this week in her Brandeis office.

Klausen, a native of Denmark who has been at Brandeis for 17 years and is a specialist on Muslim communities in Europe, seemed the ideal author to unravel how and why the original publication of the cartoons in the Jyllands-Posten newspaper resulted, several months later, in boycotts, protests, and violence thousands of miles away.

Now she finds herself entangled in debates that sometimes seem reduced to posturing on the Internet, stripped of nuance, not unlike the original cartoon conflict.

Some scholars and conservative bloggers are accusing Yale of cowardice, arguing that academic freedom should not be surrendered to a handful of extremists. And an Arab political website in Cairo is railing about the Danish professor from a Jewish university trying to publish cartoons to insult the Prophet, hardly the case by any measure.

Yale insists it had no responsible alternative. Yale University Press director John Donatich said the university polled two dozen security and counterterrorism officials and academics who study Islam, and the majority of the security experts agreed that reprinting the images involved a risk of deadly violence.

“The turning point for me was when I was able to see it less as an issue of censorship because we are not suppressing original material,’’ Donatich said. “We are just not reprinting what was available elsewhere. . . . At that point, it became a security issue and not a censorship issue.’’

Though Klausen recognizes the predicament Yale faced, she criticizes the way Yale handled it: “The issue was, should you really ask for that sort of advice in the absence of providing context? But once you got that advice, and coming from the sources it came from, I don’t think [Yale] had much choice. If I was an administrator at the university, I would have pulled the cartoons.’’

Amid the controversy, admirers of Klausen’s work fear that her careful study of the conflict could be overwhelmed by the same kind of simplistic debate that enflamed the original dispute.

“It’s sad - and a little bit ironic - that after writing a book about the caricatures of the Prophet (peace be upon him), she risks being caricatured herself,’’ Tarek Masoud, an assistant professor at Harvard’s Kennedy School of Government who was a peer reviewer of the book, said in an e-mailed reply to a request for comment. “She is a serious scholar with tremendous respect for Islam and Muslims, and I hope this will not be lost in this controversy.’’

In her book, Klausen concludes that much of the violence, portrayed at the time as spontaneous outrage over the cartoons, was in fact manufactured to whip up anti-Western emotions for specific political goals. The violence was focused in three countries: Libya, Nigeria, and Pakistan. In each, she says, there were preexisting political conflicts for which the cartoon conflict offered fuel.

Donatich said he did not believe the images were essential because “the book is not a graphic analysis of the cartoons, and it’s not a history of the depiction of the Prophet.’’ He called it “very neutral, balanced, carefully reasoned, almost a detective story about how dissent is mobilized, and what are the political uses of dissent and the misunderstandings between cultures.’’

He added that the newspaper page is available on the Internet. The Boston Globe was among many publications that decided against publishing the cartoons in 2005, in part because they were readily available online.

Fareed Zakaria, editor of the international edition of Newsweek and a member of the Yale Corporation, said he advised Yale to drop the images.

“You’re balancing issues of the First Amendment and academic freedom, but then you have this real question of what would be the consequences on human life,’’ he said.

She was one specialist Yale consulted who favored publishing the images. Blair said omitting the historical art was reinforcing the mistaken notion that all Muslims object to depicting the Prophet, when some cultures have rich traditions of doing so, and her own previous book had contained such images without a word of protest.

Her book was never meant to reprint the 12 cartoons produced by various artists for the newspaper, several of which are insulting to Islam. Klausen wanted only to reproduce the offending Jyllands-Posten newspaper page from Sept. 30, 2005.

“Many of the cartoons did not actually show Mohammed,’’ she said. “Some of them made fun of the newspaper.

“And some, three, arguably four, were racialist depictions of a Semitic Mohammed, drawn in the tradition of European anti-Semitism.’’

On July 23, Donatich asked Klausen to meet him and Linda Koch Lorimer, vice president and secretary of the Yale Corporation, at the Westin Hotel in Boston, where the decision to exclude the cartoon page was explained to the author.

“We argued about it for two hours,’’ Klausen said. “The people who gave advice to the university were not given the opportunity to read my book. They reacted based on e-mailed pictures of the illustrations.’’

“What happened here is strikingly similar to when the Danish mullahs were traveling around the world e-mailing their pictures to make people angry,’’ Klausen said. “Yale University also, in a similar fashion, removed the cartoons from the context.’’