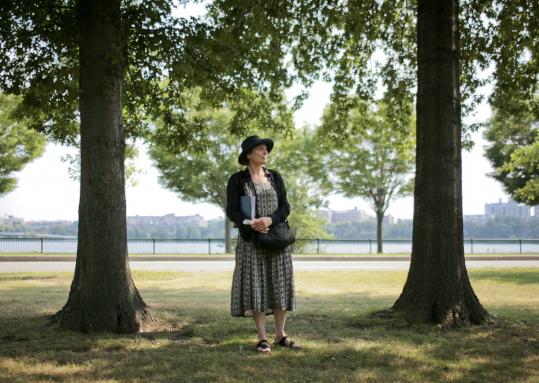 CAMBRIDGE - The state is gearing up to chop down more than 160 trees near the banks of the Charles River, including some healthy ones, as part of two long-planned projects that have local environmentalists on the defensive.

This fall, the Department of Conservation and Recreation will be removing nine healthy trees in the so-called goose meadow, in the shadow of the Boston University Bridge, to make way for rehabilitation of the dilapidated 80-year-old structure.

The department also plans to cut down 157 dead, diseased, and damaged trees along Memorial Drive, from the BU Bridge to the Longfellow Bridge, as part of its historic parkways project, which seeks to return that stretch to its original 19th century landscaping.

The two plans have been sources of contention for a local environmental group that disputes the state’s figures, saying the projects would actually destroy 400 to 600 trees along the Cambridge side of the river that serve as shelter for humans and wildlife.

The department flatly disputes that figure and says that every tree removed will ultimately be replaced with several others.

“The only trees we are taking down are dead, diseased, and damaged trees,’’ said Wendy Fox, the spokeswoman for the department. “I know people are attached to their trees. But we are not taking down hundreds of healthy trees.’’

Local environmentalist Marilyn Wellons called the state’s plans “outrageous’’ and refused to accept the state’s assertion that it will not harm healthy trees.

“They can say anything they like,’’ said Wellons, a member of Friends of the White Geese, which is fighting to keep the trees from the cutting block. “Their plan is to destroy hundreds and hundreds of trees there.’’

Walking along Memorial Drive recently, Wellons pointed out scores of trees she said the department will destroy as part of both projects. The bushy landscaping that shades the geese gathering spot near the BU bridge will be no more under the plan, she said.

“The trees that you see looking down into the goose meadow . . . will all be gone,’’ she said.

Fox, in an e-mail yesterday, said the department plans to replace the nine small healthy trees that will be cleared for the bridge rehabilitation.

“They are healthy trees,’’ she wrote, and will be replaced when the project is finished.

In an interview earlier this week, the state’s conservation and recreation commissioner, Richard K. Sullivan Jr., defended the two projects, saying the initiatives have been fully vetted by the community in a series of meetings and have been given the green light by the local conservation commission.

“We are very cognizant of the fact that trees play an important role not just in that landscaping, but all of the landscaping in that area,’’ he said. “As part of the environmental agency, we take that seriously.’’

Of the 542 trees the department inventoried on Memorial Drive, Fox said, only 157 dead, diseased, and damaged ones will be removed. They will be replaced by 301 new trees that stay true to the original landscaping, including lindens and maackias, as well as maples and oaks. The project will be state funded, a department official said.

Fox said there is no schedule yet to remove those trees.

“This is a tree loving-operation,’’ Fox said.

Jennifer Wright, director of the Cambridge Conservation Commission, said the state had informed the commission that it would remove some healthy trees on Memorial Drive along the paved walkway, where their roots might have been compromised.

Wright, whose commission has jurisdiction over riverfront projects within 25 feet of the Charles, said the commission was informed that only trees 100 feet from the riverfront will be removed.

She said the commission gave the state its approval because the parkway plan balances the needs of the users of the parkway. Moreover, she said, the department will plant more than two trees for every one removed, and each tree has a three-year guarantee.

That is a gain, she said, that might sway those initially opposed to removal.

“There is that shock initially when plants get removed,’’ she said. “Once [people] come back and they see that everything is being cared for and it’s done in a thoughtful way . . . people definitely come to realize that it is much better. “

Meghan E. Irons can be reached at mirons@globe.com.