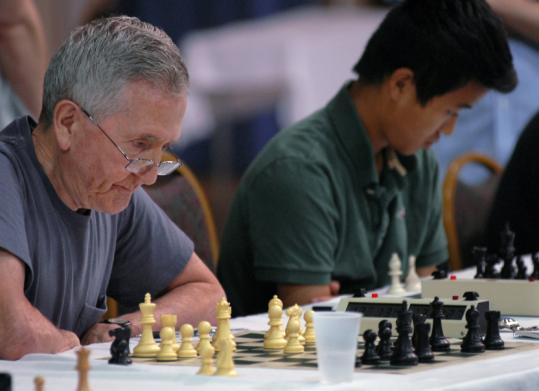 S TURBRIDGE - Many top chess players exhibit physical tics in the intensity of tournament play. John Curdo will pinch his cheek twice, then swipe a finger across his lip. Pinch, pinch, swipe, a fleeting, unconscious motion acquired over 60 years as one of New England’s top players.

With an aggressive style, Curdo has won six New England Open titles and 18 state championships, starting in 1948, when he took the Massachusetts title as a self-taught 16-year-old from Lynn. His 830 career tournament victories are believed to be a world record.

“He’s a legend,’’ said Larry Christiansen, of Cambridge, a three-time US chess champion. “I think one year in Massachusetts he won 40 tournaments, pretty much every weekend.’’

Now 77, Curdo, the onetime prodigy, still competes, but as an old warrior in a game dominated by young, agile minds and computer-study programs. Few have lasted so long. “People drop out because they get sick of getting whipped,’’ said Curdo of Auburn.

His last state championship was 24 years ago. “Back then, I was competitive,’’ he said. “You lose a lot with time,’’ Now when he plays, his hands shake. But he is still competing in 30 to 40 tournaments a year.

“Money is what gets me to do this,’’ Curdo said last Sunday at the Continental Open, a four-day tournament in Sturbridge. “The tension, it’s like gambling.’’

Curdo’s opponent on Sunday morning was Philip Sells of Albany, N.Y. In a cavernous hotel exhibition hall, dead silent despite more than 100 ongoing matches, Curdo pressed his attack against an opponent barely half his age.

“John Curdo always had the ability to attack very aggressively,’’ said Alan Trefler, chief executive of who in 1975 tied for the World Open title.

Curdo’s eyes darted. His hand repeated the flickering gesture: pinch, pinch, swipe. After 2 1/2 hours, Sells’s king was trapped. The younger man smiled and resigned with a handshake. He asked Curdo to autograph his scorecard, which Curdo did. Then, muttering under his breath, as in relief the match was over, Curto ambled away.

The victory kept Curdo in contention a little longer for hundreds of dollars in prize money. “If I had lost that game, I would have dropped out of the tournament,’’ he said.

With no chance to chase money, “there’d be no reason to play,’’ Curdo said.

He is a slim man with lively eyes. A child of the Great Depression, he still catches himself swiping extra napkins from fast-food restaurants to take home.

Before chess, “I wasn’t even a nerd,’’ he said. “At least nerds have some talents and interests. Before chess, I had nothing.’’

He taught himself to play from library books. Once, one of them contained a note tucked between pages. “Neither duffer, nor master,’’ the note read, and included a telephone number. It was an invitation to play, in an era when games were hard to find. Curdo phoned and met the man who left it. They played many times.

“John developed his talent the old-fashioned way,’’ Christiansen said. “It’s so much easier now to develop skills. On your computer, you have more information on chess than existed in the entire world in the 1940s.’’

“The world of chess around here was dominated by John Curdo and a small number of players,’’ said Trefler. “And the monarchy was respected by its subjects.’’

In 1975, the Globe Magazine profiled the stars of the Boston chess scene. Curdo, then 43 and at his peak, acknowledged that the hours he devoted to the game had cost him his first marriage.

He was an administrator for in the 1960s and 70s, then quit work to become a chess pro in the early 1980s. He played up to 50 tournaments a year, mostly in New England, and says he earned “McDonald’s’’ wages.

Competitive chess requires so much study that for many top players, the game is all they have. The lifestyle attracts introverts, Curdo said. “There’s an old joke that if you wrote a book on the sex lives of chess players, it would have a lot of blank pages.’’

Twelve years ago, at 65, Curdo married his wife, Carol, the mother of one of his chess students. “I didn’t waste my whole life on chess; I have a wonderful wife,’’ he said.

Beating Curdo is a rite of passage for up-and-coming hotshots. Not that it’s easy. “He’s approaching 80 and still quite a dangerous player,’’ said Christiansen.

Curdo admits to sometimes cherry picking tournaments, where he has the best chance to win money.

He tries to avoid his nemesis, Alexander Ivanov, a native of Russia who lives in Newton, and whom Curdo has beaten once in about 70 games. Ivanov, ranked the 30th strongest player in America by the US Chess Federation, is a demonstrative competitor who hides his face behind his hands during games and plans his moves in the dark.

Ivanov, 53, said in an interview that Curdo “is not as strong as he used to be.’’

“It’s a game for the young, with everybody learning from computers,’’ Ivanov said.

Yet, old age builds experience that can make players such as John Curdo very dangerous. “It’s hard to learn to play chess,’’ Ivanov said, “but you cannot unlearn it.’’