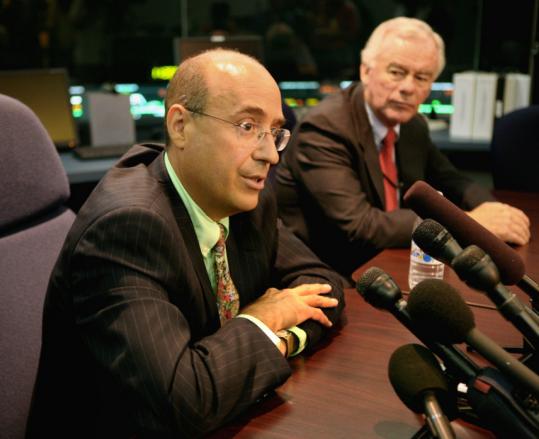 State Transportation Secretary James A. Aloisi Jr. sought to reassure MBTA riders yesterday that service and accountability at the troubled transit agency will improve, as new details emerged on how Governor Deval Patrick’s administration forced the resignation Thursday of Daniel A. Grabauskas as MBTA general manager.

Aloisi, who led the administration’s push to oust Grabauskas, said state transportation officials will consider, among other changes, whether the MBTA needs a general manager at all, as the state looks to centralize oversight of its transportation agencies.

“It may be that the model of what we have known to date . . . changes and becomes a different model,’’ Aloisi told reporters. “We’re going to seek advice and ask ourselves what will work best under this new structure.’’

As Aloisi rode bus routes in Roxbury and Mattapan to talk to commuters and employees, critics blasted the settlement with Grabauskas, with one leading lawmaker calling it “totally irresponsible.’’

Aloisi said he would meet next week with David D’Alessandro, the former John Hancock chief executive who will lead a “top to bottom’’ review of the Massachusetts Bay Transportation Authority. The review, Aloisi said, will be finished by Nov. 1, when the merger of state transit agencies is set to be complete. Aloisi continued to leave open the possibility that fare increases proposed by Grabauskas would not be implemented.

“We’re in a time of changing the status quo,’’ he said. “And that’s a good thing. There are no sacred cows.’’

Grabauskas’s resignation Thursday night may have accomplished one goal Patrick and his aides had long wanted. But it did not unfold the way they had hoped.

In a high-stakes stare-down, Grabauskas won a significant payout, $327,487, that Patrick administration officials did not want to pay. That’s because, during a chaotic, closed-door negotiating session of the MBTA board, administration officials failed to persuade enough board members to fire or put Grabauskas on leave, which would probably have led to a smaller settlement.

Once that initial attempt failed, it left the administration - led by Aloisi, chairman of the T board - with only one option to remove Grabauskas: buy out the rest of his contract.

Even though Aloisi protested that the payout was too high - and ultimately voted against it - he knew coming into the meeting that it might be the only way to force out Grabauskas, a holdover from a Republican administration. Aloisi came prepared to push a proposal that would have allowed Grabauskas to receive a full buyout of his contract in return for his resignation, board members said.

Darnell Williams, one board member who voted against the deal for Grabauskas, said there was consensus that a financial settlement was necessary, but the terms were in dispute.

“The amount was unacceptable, given the management concerns that we had,’’ Williams said. “We argued for a lower amount, but the other side wouldn’t negotiate.’’

Grabauskas declined to comment yesterday, but a friend said he was satisfied with the outcome.

His removal has potentially far-reaching political implications. Patrick not only went against many top Democrats who backed Grabauskas, he will now be held responsible for an agency that has been plagued with problems. Meanwhile, some Republicans have been floating Grabauskas’s name as a future statewide GOP candidate.

Senate President Therese Murray and House Speaker Robert A. DeLeo, both of whom offered earlier praise for Grabauskas, declined to comment yesterday.

But other top lawmakers were angered over the size of the settlement, which comes at a time of severe budget cutbacks.

“It’s financially irresponsible,’’ said Senator Steven C. Panagiotakos, a Democrat who chairs the Senate Committee on Ways and Means. “If you have good cause, fire the guy. If you don’t, let him serve out his time and earn his money. For the taxpayers and toll payers to have to foot this bill is just totally irresponsible.’’

House Republicans released a statement yesterday defending Grabauskas, calling him “more qualified to run the MBTA than any hack the Patrick/Aloisi team could dig up.’’

“The whole episode was a disgrace; they should be ashamed of themselves,’’ said Senate minority leader Richard R. Tisei, a Wakefield Republican for whom Grabauskas worked in the early 1990s. “For someone who wanted to get rid of people’s cynicism about government, I can’t think of an episode that would make people more cynical than the way Secretary Aloisi and his minions have conducted themselves over the last few weeks.’’

When Aloisi was asked whether Grabauskas had ignored administration directives, he said, “I have had some recent instances where I have found the level of cooperation to be unacceptably poor, but I’m really not interested in getting into the past.’’

He refused to elaborate.

The general manager position will be filled temporarily by William Mitchell, the agency’s general counsel, who has been the source of controversy in the past.

In 2000, Kevin J. Sullivan, then the transportation secretary, called for Mitchell’s resignation after learning that Mitchell had stayed free-of-charge at a Florida condominium during the 1999 Super Bowl compliments of a convicted racketeer and admitted arsonist. Mitchell told Sullivan at the time that he was unaware that the man, Francis K. Fraine, had provided the accommodations and said the trip was arranged by someone else.

MBTA spokesman Joe Pesaturo said yesterday that “Mitchell was completely exonerated’’ after a former federal prosecutor was brought in to investigate the allegations.

Grabauskas’s resignation is the third departure of a high-ranking transportation official in eight months, a startling turnover rate during a crucial period in which Patrick has sought to repair the state’s crumbling transportation network and overhaul its bureaucracy.