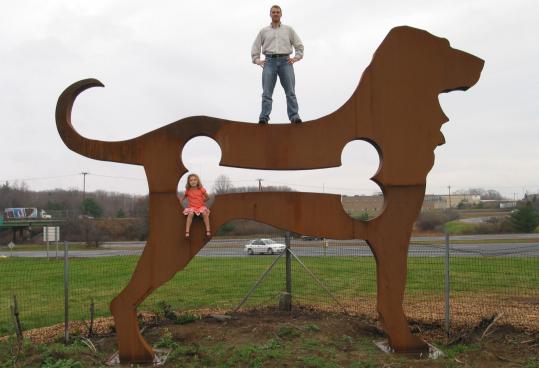 Just about everywhere in the country Dale Rogers travels, someone brings up the Route 495 dog.

It’s not any dog, of course, but a 16-foot-high, 20-foot-long reddish-brown metal dog, with a cutout of a dog bone in its midsection. And there it stands at Interstate 495’s Exit 48 in Haverhill, looking out over the highway.

“People have always wondered why it’s there,’’ said Rogers, a 36-year-old metal sculptor from Haverhill. “When you create pieces that make people question why, it helps build a long-lasting impression.’’

Rogers is sparking more such musings as he takes 20 similarly designed smaller dogs - 8-feet-high by 10-feet-long - on the road for a series of public art exhibitions.

From today through Sept. 15, the dogs will visit Beverly, Haverhill, Lowell, and Newburyport, Portsmouth, N.H., and Ogunquit, Maine, for five or six days in each community.

The aim is to raise awareness of public art and make people smile, which is what the Route 495 dog has been doing since 2005, Rogers said.

The series of exhibitions, called the Big Dog Show, is also a field test for a larger show Rogers hopes to put on in the next few years - 100 10-foot-high dogs standing in Boston Common.

“Art is all about communication,’’ said Linda Post, founding director of the Paradise City Arts Festival in Marlborough, which Rogers has participated in for several years. “This is Dale’s form of visual communication. And he can communicate with many more people if he brings the installation of dogs to a community where they will engender conversation and interaction.’’

Rogers grew up on Spring Hill Farm in Haverhill, which his family has owned since 1902. He always loved art. But upon graduation from Haverhill High School, and not wanting to be a “starving artist,’’ he studied business administration at Southern New Hampshire University.

He graduated in 1995 and went to work on the family farm, learning welding to keep the farm equipment running. “Unfortunately, or fortunately, I was a horrible welder,’’ he said. “I began making sculpture just to become a better welder. That’s where the love affair started.’’

At first, he made functional and affordable pieces from metal, such as clocks, wine racks, furniture, and wall art.

“After two years I decided it was time to focus on one thing, and that was sculpture,’’ he said.

Rogers travels to 10 to 15 art shows a year around the country to sell his sculpture. He also does work on commission. Prices range from $2,100 for a small dog to $40,000 for large public installations.

His pieces can be found in galleries, private collections, and displays of public art across the United States and internationally, and have won a number of awards.

His studio is modest, located in the walk-out-basement of his house, which sits on the edge of the family farm property. He lives there with his wife, photographer Heather Rogers, owner of Beabe Gallery in North Andover, and three children, ages 6, 4, and 2.

Working in stainless steel and Cor-ten steel, he creates abstract geometric sculptures - and the dogs.

“In the world of sculpture it’s easier to sell a piece of artwork people have an emotional connection to,’’ Rogers said. “I found people were super-passionate about their dogs.’’

The design was based on “a generic American dog,’’ he said. And the bone in the midsection was a “needed internal component.’’

The dogs are made of Cor-ten, which naturally rusts, creating the reddish-brown color.

The first Route 495 dog was 8 feet high and small enough for pranksters to remove. “When I put that one up, I knew people liked it,’’ Rogers said. “When it disappeared, I knew people loved it. I realized we had to build a bigger one that couldn’t be moved.’’

The 16-foot dog was created in pieces in his studio and assembled on site, which is family farm property along the highway. Rogers now has plans to sell that dog, and replace it with a 42-foot-high version.

“I love the scale of his work and I love the humor of his work,’’ Post said. “I have one of the dogs in my backyard, and people comment on it all the time.’’

Chris Fitzmaurice, owner of the Chameleon gallery in Newburyport, also has a dog sculpture at her house.

“It’s outside and I can move it around,’’ she said. “I can surprise people. It can be in a field or by the front door.’’

Fitzmaurice is also excited about the traveling dog shows. “I love artwork that can take people by surprise,’’ she said. “You’re driving along and say, ‘Look at that.’ You can enjoy it and it can generate dialogue, even if it’s ‘I don’t get it.’

“Anything that gets people talking is a wonderful thing.’’

For a Big Dog Show schedule, visit www.dalerogersstudio.com. A meet-and-greet with Dale Rogers will be held at Chameleon, 18 Liberty St., Newburyport, Aug. 27, 5:30 to 7:30 p.m.