Funding plunges at Mass. agencies Thousands will be denied help 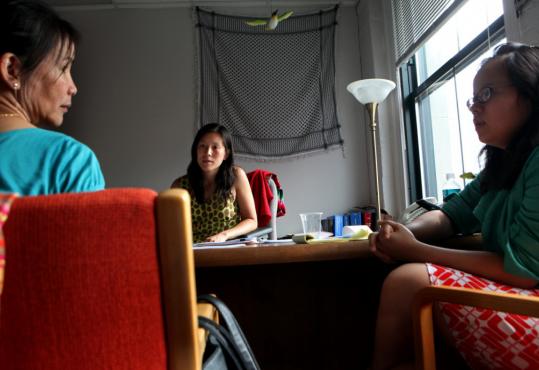 A dramatic drop in funding is forcing legal aid programs across Massachusetts to lay off lawyers, cut back their office hours, and turn away a growing number of people who cannot afford to pay for legal help.

Tens of thousands of people statewide who would normally qualify for free assistance this year will not get it, according to the Massachusetts Legal Assistance Corporation, a quasipublic agency that administers most of the funding for the state’s legal aid programs.

Greater Boston Legal Services, the region’s largest legal assistance agency for the poor, reduced its staff from 135 to 124 employees this year and is preparing to lay off at least 10 more in the fall. South Coastal Counties Legal Services Inc. is planning to lay off five lawyers. And the Legal Assistance Corporation of Central Massachusetts has reduced its staff from 42 to 31, cut benefits, and closed its offices on alternating Fridays.

With low-income people struggling to fight foreclosures and avoid homelessness, the cutbacks could not come at a worse time, legal aid advocates said.

Legal aid services are available to low-income people in noncriminal cases over such issues as housing, healthcare, and domestic violence. Lonnie Powers, executive director of the state Legal Assistance Corporation, said 100,000 cases were closed with the help of legal aid attorneys in Massachusetts in 2008. But even before the funding shortfall, only a fraction of the people who needed the free legal help were getting it. The cutbacks are making the situation worse.

“More people who need help with foreclosures, or battered women, or people who have been illegally denied wages they’ve earned, are not going to have a lawyer,’’ Powers said. “It undercuts a foundation of a democratic society when people can’t get access to justice when they need it.’’

Sivaing An, an advocate for the disadvantaged who works with the Asian Task Force Against Domestic Violence, said she used to be able to get immediate help from attorneys at Greater Boston Legal Services but has been less successful this year.

Yesterday, An had to take a client to court herself because she could not find an attorney to come with her.

Her fear was that she would not be able to present her client’s case to the judge as effectively as a trained lawyer.

Funding for legal services comes from several sources, including money allocated by the state Legislature, but the biggest source is an obscure one: interest on funds that are temporarily set aside by lawyers on behalf of clients.

The Lawyers’ Trust Accounts program, established in 1985, allows attorneys to place certain escrow funds into pooled accounts. The earnings on those accounts are used to fund legal services.

As interest rates have fallen in the economic downturn, so has the amount of money available for legal aid.

The revenues for legal aid fell from $31.8 million in 2007, when the Federal Reserve rate on which interest on many pooled accounts is based averaged 5 percent, to $15.6 million last year, and only $4.1 million so far this year, with the rate down to 0.16 percent in July.

Also, the Legislature, the second-biggest money source for legal assistance, reduced its funding for legal aid by $1.5 million to $9.5 million for the fiscal year beginning July 1, according to the Massachusetts Legal Assistance Corporation.

In hindsight, Powers said, when funding peaked a few years ago, more revenue should have been saved for a rainy day. Instead, some was used to boost staff and raise salaries for lawyers, who historically receive a fraction of the salaries they would get at private firms. The starting salary for a Legal Aid attorney in Massachusetts averages $45,000, he said.

“We didn’t anticipate the downturn and certainly not the severity,’’ Powers said. “There were lots of people not getting services. We thought we should err on the side of getting services to people who needed them.’’

Sheila Casey, executive director of Neighborhood Legal Services in Lynn, likened the predicament to a “perfect storm.’’ The organization laid off five staff members in November and is writing grant applications in the hope of making it through the fiscal year with its remaining staff of 25 intact.

“The economy fell apart, our funding declined precipitously, and we had to reduce our staff,’’ Casey said. “At the same time, demand for services was rising by about 30 percent. We are not as able to serve the clients out there that need our help.’’

Greater Boston Legal Services is facing a budget deficit of $2.5 million in 2009, with no relief in sight for 2010. Already, the agency has implemented a salary freeze and an unpaid furlough program, and it has increased its fund-raising efforts. But cost-cutting efforts cannot stave off layoffs, and now management is considering what areas to cut.

“This couldn’t come at a worse time, in terms of the client need,’’ said Robert Sable, executive director of the Boston program. “There are going to be people who are homeless with no income or losing their lives because of this. This is the biggest loss of funding we’ve ever faced.’’

In an effort to prevent layoffs, Legal Assistance Corporation of Central Massachusetts launched a campaign this summer urging every lawyer in Worcester County to donate the cash equivalent of two billable hours of work.

The Worcester nonprofit’s executive director, Jonathan Mannina, said the agency is trying to offset a budget shortfall that set it back about $1.1 million in two years, from $3.5 million to $2.4 million for the fiscal year beginning in October.

Mannina said staff attorneys, who already accept lower salaries to work with the poor, are being squeezed too hard.

“They have enough struggles to deal with in terms of financially making it, and clients coming to them with their lives falling apart,’’ Mannina said. “Now they have to worry about getting laid off and paying their bills.’’

Western Massachusetts Legal Services in Springfield, facing a 50 percent budget cut, launched a work-share program this summer that reduced hours for every employee by up to 28 percent.

Executive director Cristina Poulter Elzeneiny said employees chose to cut back hours rather than lay off staff, which has already dropped through attrition to 38 from 50 in about two years.

Elzeneiny said the cuts mean about 2,500 fewer cases will be litigated this year.