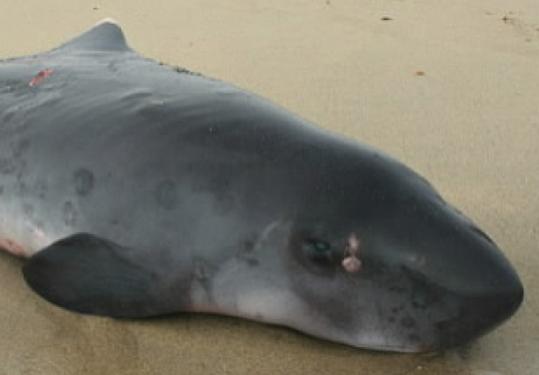 A dwarf sperm whale washed up on Nantucket Wednesday and was taken to the New England Aquarium for a necropsy. (Eve Fraser-Corp for The Boston Globe)
By Jack Nicas Globe Correspondent / August 1, 2009

Biologists at the New England Aquarium in Boston performed a necropsy on the mammal yesterday, leaning toward an infection as the possible cause of death. The whale also sustained two large shark bites.

The deep-sea whale was the first of its kind brought to the aquarium in at least three years.

“To have them close to shore is uncommon,’’ said Kate Sardi, a senior biologist at the aquarium. “It’s the first time I’ve dealt with one.’’

Edie Ray, who has volunteered with the Nantucket Marine Mammal Stranding Team for nearly 30 years, said she did not recall ever encountering the species on the island’s shores.

The dwarf sperm whale is the smallest whale in the world and is often confused with its slightly larger cousin, the pygmy sperm whale. In 2006, there was an estimated 395 of both species in the western North Atlantic Ocean, according to the International Union for Conservation of Nature’s Red List, an inventory considered the authority on the conservation status of species.

Although dwarf sperm whales have been spotted around the world - including off the coast of Nova Scotia, Mexico, Ecuador, Japan, France, and South Africa - there are no firm estimates on the total population, because they generally prefer deeper seas.

The beached whale was discovered at about 7:30 a.m. Wednesday on Sconset Beach. Members of Nantucket’s stranding team responded to the area as the animal was dying, said beach manager Jeff Carlson.

Carlson said the first witness to see the whale did not notice the shark bites. But by the time rescuers arrived, it had two large chunks missing, one above its dorsal fin and one on its lower right side.

Sardi said she sent photographs to Greg Skomal, a state shark specialist, who suggested a Mako shark may have bitten the whale after it was injured, an attack it would not attempt on a healthy cetacean.

The stranded whale was a young male, Sardi said. As an adult, the species reaches 8.5 feet and more than 460 pounds.