Say they have lost faith in Grabauskas 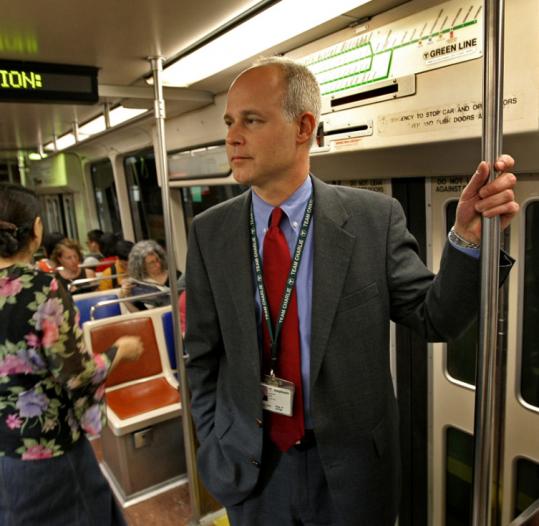 Three MBTA board members issued a scathing letter yesterday questioning the “focus and commitment’’ of the T’s general manager, Daniel A. Grabauskas, whom they described as “out of touch,’’ in what appears to be the first public move to fire the longtime leader of the chronically troubled agency.

The letter, which explicitly states that the three members have “lost confidence’’ in Grabauskas, was written after two serious trolley crashes in the past 14 months and a 30-minute systemwide power failure that stranded 60,000 riders in May.

But it also follows a recent surge in ridership that set a series of monthly passenger records and the implementation of a popular automated fare collection system.

“We have certainly lost confidence in the general manager’s ability to take ownership of the failings of an agency he has led for five years,’’ said the letter, signed by board members Darnell Williams, head of the Urban League; Janice Loux, a union leader recently reappointed by Governor Deval Patrick; and Ferdinand Alvaro, a Republican lawyer appointed by Patrick. The board has eight members.

“Nor do we have the confidence that he can execute a plan that will address our concerns at this critical juncture,’’ the letter stated. “Sadly, the general manager seems to be out of touch.’’

The letter follows a strikingly public dispute between state Transportation Secretary James A. Aloisi Jr., who is chairman of the Massachusetts Bay Transportation Authority board, and Grabauskas, who runs day-to-day operations. The two are barely civil to each other when transportation overhaul is the cornerstone of Patrick’s policy agenda.

Earlier this month, Aloisi pointedly criticized Grabauskas for being out of town when the National Transportation Safety Board issued a highly critical report on one of the trolley crashes.

Grabauskas responded that he was on a mandated furlough but was readily available by phone. He said Aloisi, his boss, was telling “a lie.’’

Grabauskas, who was appointed by former governor Mitt Romney and has always been an outsider among Patrick officials, received a copy of the letter from the Globe after it had been publicly released by Aloisi’s office.

“What this whole thing boils down to is, I think, a very sad attempt to exploit two accidents involving human error, which was the conclusion of that National Transportation Safety Board,’’ Grabauskas said. “I think people see it for what this is, which is just more obvious politics from the Patrick administration and his appointees.’’

In the letter, dated Monday, the three board members cited Grabauskas’s “conspicuous’’ absence following the release of the NTSB report on July 14 and criticized the MBTA’s spokesman for challenging a key safety recommendation.

The members did not point out that Aloisi also refused to make any public comment following release of the NTSB report.

Aloisi, who was appointed by Patrick in January, has had prickly relationships with several legislative leaders and subordinates. Alan LeBovidge, the former head of the Massachusetts Turnpike Authority, was not speaking regularly with Aloisi when LeBovidge resigned in May.

Alvaro and Loux said yesterday that their concerns are about performance, not politics.

“This letter is entirely about our concerns about safety,’’ said Alvaro.

The letter faulted Grabauskas for not acting quickly enough, and at some points dismissing, calls that he upgrade the antiquated signal system on the Green Line, an improvement the NTSB said could have prevented last year’s fatal crash and might also have averted a crash two months ago blamed on a distracted driver.

Over the past year, Grabauskas has taken tentative steps to improve automation on the Green Line, but has also publicly expressed reservations about whether a so-called fail-safe system will work on the idiosyncratic and high-volume line.

Alvaro and Williams would not say directly whether Grabauskas’s job is now on the line; Loux, communicating through a spokesperson, declined further comment.

Aloisi, who declined an interview request, said in a statement that board members will discuss concerns raised in the letter in the near future.

“I am disappointed that the general manager has reacted in a political way to the legitimate concerns regarding safety and performance that were raised by my fellow MBTA board members,’’ he said in a statement. “This has nothing to do with politics, but rather is about the confidence of the board and the public in the general manager.’’

The board meets next week. Grabauskas’s contract does not expire until May, meaning the board could be forced to pay a six-figure settlement if members choose to fire him.

Grabauskas said yesterday, as he has often said before, that he will not resign.

It is unclear if a majority of the board shares the concerns raised in the letter.

“They’re very serious accusations,’’ said Grace Shepard, another board member who received a copy of the letter yesterday. “I’d like to have the general manager have an opportunity to respond to them. I want to hear the other side.’’

T board member Willie J. Davis said he had yet to receive the letter. “I like Grabauskas, and that’s all I can say,’’ Davis said.

Grabauskas has received mixed reviews while running one of the state’s most complicated and difficult bureaucracies, one that some observers say is dragged down by debt, old equipment, and rigid work rules. The T has recently proposed a fare hike of 19.5 percent to keep up with is multibillion-dollar debt.

Senator Steven A. Baddour, a Methuen Democrat and cochairman of the Legislature’s Transportation Committee, said board members are playing politics and called the letter a “cheap shot.’’

“It’s ridiculous,’’ he said. “Obviously, these are Patrick appointees doing the bidding of the governor, and it has nothing to do with his job performance, or his ability to manage a very difficult agency.

“I know it’s a tough election year,’’ he said. “I know the poll numbers are sagging, but we shouldn’t be looking for scapegoats.’’

© Copyright 2009 Globe Newspaper Company.
PDF Read the letter from the MBTA board members
Your comment is subject to the rules of our Posting Policy
This comment may appear on your public profile. Public Profile FAQ