Father Bill was truly the angel 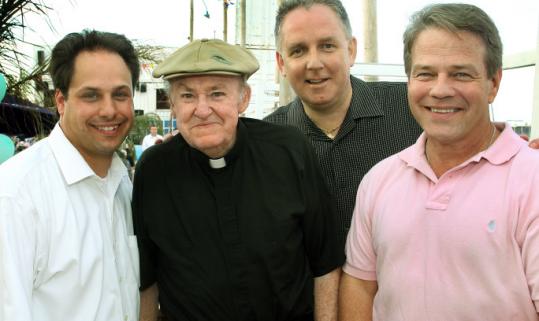 Most people don’t have buildings or bridges or parks named after them, until they die. The Rev. William McCarthy, known around the South Shore simply as Father Bill, had a building named after him years ago, long before he developed health problems that led to his death Thursday night at age 82.

Father Bill’s Place in Quincy is very much like its namesake: a simple building with a big heart. It opened its doors 20 years ago; before that, McCarthy had let homeless folks stay in the basement of St. John’s School; he was pastor at the church. Neighbors began to complain, so the priest began looking for another space. He found one near the animal shelter on a dead-end road - no neighbors to complain.

Though he was proud of the shelter, his goal was always to take the sign down and close the doors. He had hoped he was just filling a gap until a more permanent solution came along. It wasn’t to be. In fact, from one Quincy shelter for homeless men in 1988, the organization McCarthy helped build now includes a network of shelters for men and women, families, teens in trouble, battered women, and veterans. There’s transitional housing, until the “guests,’’ as he always called them, get on their feet. There’s a work-training program, a health care program.

“Father Bill’s has gone from a $3 million operation to $13 million,’’ says Jim Wells, a board member who chairs the annual Food Fest and Auction every summer at Marina Bay. That first event 15 years ago netted $3,000. Last year, it raked in $330,000.

Wells, one of legions who think Father Bill walked on water, recalls the fifth annual fund-raiser. “The skies over Boston Harbor looked like something out of ‘Ghostbusters.’ There were huge black clouds, and we all thought the worst storm ever was coming.’’ McCarthy went over to a corner with his Bible and began saying prayers. “The skies cleared and parted, and we had a bright red sunset,’’ says Wells. “How did we go from a hurricane one moment to the calming of the skies?’’ It is, for Wells and others who know McCarthy, a rhetorical question.

If McCarthy had connections in high places, he also had plenty of earthly connections and put the touch on all of them for his various projects. Arthur Connelly, chairman of South Shore Savings Bank in Weymouth, was one of many supporters who McCarthy called his angels. Once, when Connelly was leaving a funeral, his friend told him to hand over his wallet, quick. Why, asked Connelly. “If I don’t get it first, Father Bill will,’’ replied his friend.

Years ago, at St. John’s, the housekeeper told McCarthy the bed linens were missing. “I gave them away,’’ came the reply. “I also gave away the furniture in Room Four.’’ A parishioner wondered why the priest never wore the warm cashmere coat she’d given him that had belonged to her late father. He had given that away, too.

Illness didn’t prevent McCarthy from fund-raising. He got in trouble last year when recuperating from hip surgery in a nursing home after using a prohibited cellphone to call donors. A few weeks ago, as he lay in a hospital bed, he had a friend hold the phone to his ear so he could make calls to his angels asking for one last round of money.

Asked about his shakedowns some years ago, McCarthy shrugged and replied: “I get on the phone to people I know can afford it.’’

Nor did fighting neighbors, politicians, and businessmen who wanted the homeless out of the way faze him. A teen shelter in Weymouth nearly closed when the landlord wanted to sell it to a condo developer; McCarthy raised $227,500 to buy the property and renovate it.

Most shelters won’t accept those who appear drunk; Father Bill’s created a special unit for them, with Alcoholics Anonymous meetings. Ten years ago, he battled neighbors and city councilors who protested a home for unwed mothers who had no other place to go.

“Certain city councilors were fighting with Father Bill, and the archdiocese was putting pressure on him to back off,’’ says John Yazwinski, the executive director of Father Bills & MainSpring. “He didn’t back off. I think he walks the walk better than anyone I’ve experienced in my lifetime.’’

A few years ago, McCarthy semi-retired - he always put the emphasis on “semi’’ - to the Cape to live with his nephew, but he continued making regular trips to Quincy to check on his projects. And he continued to call on his angels.

On his 80th birthday two years ago, friends threw a party for McCarthy at the Lantana in Randolph. He allowed it under one condition: that they charge, with the proceeds going to benefit Father Bill’s Place. “I don’t care if they come to the party or not, as long as they give money,’’ he told me.

Recently, as he was failing, he still made calls to get people to attend his 15th annual Food Fest. It is Tuesday at Marina Bay. Father Bill wouldn’t care if you came, just as long as you write a check.

Father Bills & MainSpring’s Food Fest and Auction will take place Tuesday at 6 p.m. at the Marina Bay Beach Club. For more information, go to fatherbillsmainspring.org or call 617-376-2255. Globe columnist Bella English lives in Milton. She can be reached at english@globe.com.