A fixture of Mt. Washington dies

Mascot had been longtime presence at observatory 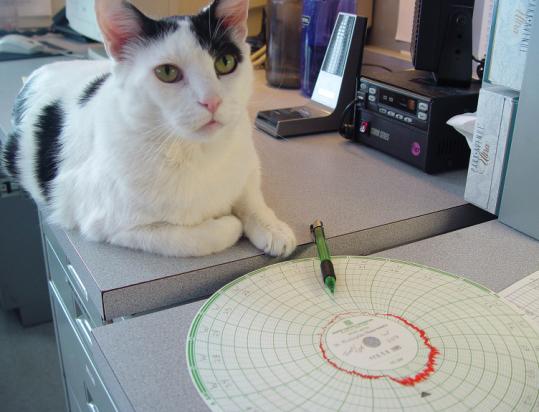 He lived a full life, from the streets of Vermont to the top of New England’s highest mountain to the colorful pages of a children’s picture book

But old age and a liver tumor began taking their toll, and last week, Nin, the former mascot of New Hampshire’s Mount Washington Observatory, was laid to rest. He was believed to be 19 or 20 years old.

“He was a very special cat,’’ said Diane Holmes, a Mount Washington State Park ranger who took him in to her home in Gorham, N.H., after he retired from his mountain life in 2007. “We miss him a lot.’’

Picked up by an observer in Vermont, Nin spent about a dozen years at the facility atop Mount Washington. Within its cold, concrete walls, he “brought a little piece of home’’ to lonely staff members, interns, and visiting researchers, said executive director Scot Henley.

Undeterred by harsh weather, he would follow them around, meowing if they walked too fast for him to keep up. He had little luck catching mice, so he preferred to ingratiate himself to summer tourists, waiting politely for scraps of food to fall off their tables.

Recently, he became the protagonist of “Cat in the Clouds,’’ a children’s book written by Eric Pinder, a former weather observer at Mount Washington.

“The idea is to give a cat’s eye view to what it’s like to live and work at the observatory,’’ Pinder said. “Nin just had a lot of personality. He just seemed like the perfect choice.’’

He enjoyed his retirement, too, getting reacquainted with the valley, its trees, birds, bugs, sounds, and smells. He took long walks and watched red and gray squirrels. Tired from the exercise, he napped.

He was a problem solver, Holmes said. Too old to jump, he would figure out ways to climb to the highest surfaces in search of food meant for Holmes’s other two cats.

His failing health prompted her and her husband, Michael Pelchat, also a ranger, to have him euthanized July 14. Holmes said his burial site overlooks the Northern Presidential range of mountains.

Jayakrishna can be reached at njayakrishna@globe.com.

The cats of Mt. Washington