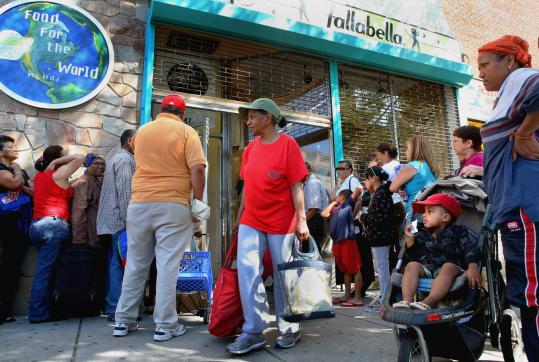 Lines are common outside a food pantry in Lawrence on Wednesdays, with 400 clients or more being served. (Wendy Maeda/Globe Staff)
By Sarah Schweitzer Globe Staff / July 22, 2009

LAWRENCE - A year ago, Broadway was a corridor of possibility. Up and down the central artery of this city, dozens of small businesses thrived, many owned by residents with roots in the Dominican Republic, Puerto Rico, and beyond.

Now, a global economic meltdown later, chunky gold chains and hammered hoop earrings dangle unsold from velvet displays at Kajoma Jewelry. The store’s owner, Wilson Ormaza, explains, with eyes lowered, that he’s laid off two of his five workers. A few doors away, four men sit with hands clasped on the stoop of Quirico Barber Shop hoping for customers who used to wait three hours for a haircut.

Across the way, the owners of a beauty supply shop have packed up and moved back to the Dominican Republic. At night, in a house on nearby a side street, 17-year-old Carlos Feliz listens to gunshots and noisy carousing as his unemployed classmates take to the streets. In a leafy neighborhood up the hill, Karen Lawson lies awake.

“I can’t eat, I can’t sleep,’’ said Lawson, who lost her job as a special education teacher and is scrambling to find insurance to cover her son. “I always thought I’d have a job. But now, nothing is sacred.’’

Nowhere is the recession’s destructive power felt more than in Lawrence. This city of 70,600 - one of the nation’s first planned industrial centers, its seal bearing the word “industria’’ and the image of a bee - has 5,217 jobless residents. The unemployment rate in June was 17.3 percent, the highest in Massachusetts, according to state data released yesterday. Almost double the state unemployment rate of 8.7 percent. Higher even than battered Michigan’s 15.4 percent, the highest of any state.

The numbers are staggering, and psychically punishing for a city that thought it was on its way back. After years of watching other smokestack cities transform and regain momentum, Lawrence recently had glimpsed hints of its own rebirth -a new $110 million high school, decayed mill-spaces rehabbed into lofts and businesses. Now, the murder rate is climbing, storefronts are shuttering, tax collection rates are falling.

Across the city, people are out and about in the middle of the day, with little to fill the grind of empty hours.

“I have cleaned my whole apartment up and down,’’ said Myrna Burgos, a 49-year-old who was laid off in April from her job of 10 years as an intake coordinator for a psychologist’s office.

Burgos said she used to find solace in her neighbors. But now, many of them - also newly unemployed - have moved in search of better prospects or simply disappeared into their homes for days at a time.

“A lot of people are depressed,’’ said Burgos. “When people get depressed, they give up.’’

Burgos said she has not given up. She’s still applying for jobs - 50 and counting. None has panned out. Her unemployment benefits and food stamps have covered her so far. But on a stifling Tuesday, as she made her way down Essex Street to the fuel assistance office, she eyed the food bank. The next day, the storefront would be mobbed, as it is each Wednesday, with residents desperate for bags of such staples as Parlamat milk and vegetables. The food bank is trying to keep pace with spiraling demand that is up 33 percent over last year.

Soon, Burgos said, she may be joining the throng.

The desperation for work here shows daily, in waves of jobseekers going door to door.

They come to Rosario Zappala’s bakery, too.

“It used to be, ‘How much per hour?’ ’’ said Zappala, the third-generation owner of Tripoli Bakery, maker of Sicilian-styled stuffed bread, macaroons, and lemon totos. “Now I get, ‘I’ll do anything.’ ’’

Zappala is in no position to take them on. He’s already straining to keep his roster of workers. Customers are buying less, and to justify paying his bakers, he’s given them tasks such as cleaning. None has complained.

Prandy Tavarez, owner of Don Pedro, a seafood restaurant that used to earn more in three nights than what it now earns in seven, has laid off four of his seven workers. Still, the 30-year-old can’t make ends meet. Now he travels to mechanics shops and hair salons, hawking such dishes as seafood salad in small cups.

“It’s really terrible,’’ he said, as he sat on the stoop of one of the salons with its barbers, their eyes fixed on the horizon, as though a solution to their common plague might materialize in the landscape of stone churches and smokestacks.

Two-term Mayor Michael Sullivan says the downturn is par for the course in Lawrence, where unemployment historically has been double the state’s. He says language barriers prevent some of the city’s large number of Spanish-speaking immigrants from finding work. Now, the problem is magnified by the global economic downturn. Buses that used to ferry Lawrence workers to day jobs in Boston, he said, no longer make the trips because companies have cut back.

“It feels like this time, everyone is in this globally,’’ said Sullivan, who is prevented by term limits from running again and will move to Hollywood, Fla., when his term ends in January to open a Boston sports-themed bar. “It’s not just Lawrence.’’

The city has been forced to cut back, with such moves as unpaid furloughs for city workers and temporary closings of firehouses. As residential property tax rates have gone up - from $9.23 per $1,000 of value in 2007 to $10.70 in 2009 - collection rates have fallen from 96 percent to 93 percent. Police have assumed added duties, such as watching over 800 foreclosed properties. Though some crimes have dropped, homicides have climbed to five so far this year, compared with four in all of last year.

Across town, at the government-funded ValleyWorks Career Center, the waiting room is crowded with residents applying for unemployment benefits. Many have been unemployed so long that their benefits have expired. They cry to counselors for help. But the chance for extensions is often slim.

“I tell them to call welfare, to call fuel assistance,’’ said Vilma Valle, a counselor.

Valle tells her clients to keep looking for jobs. Yet she confides that the only ones she knows of in Lawrence are temporary - and those tend to be oversubscribed. A worker referred to a job by a temp agency often arrives at the job site to find 20 other workers there. The worker returns home without pay, and out transportation money.