Plates will mean a parking scramble 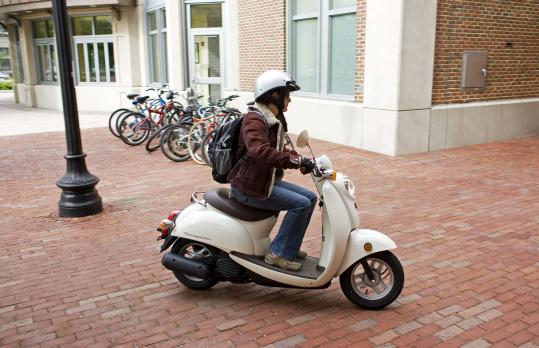 The Herb Chambers Vespa of Boston dealership on Brighton Avenue is normally a cheery place, filled with snazzy Dragon Red and Midnight Blue mopeds, and customers giddy about their purchases. But this week, general manager Diodoro Mayen is anything but happy.

On July 31, a new state law will kick in that could require license plates for hundreds, if not thousands, of scooter owners whose bikes are smaller and sleeker than motorcycles, yet slightly faster than old-fashioned mopeds. Because of their diminutive size, such scooters - including Mayen’s top three Vespa sellers - usually pass for mopeds and enjoy the enormous perk of free sidewalk parking. But no longer.

With mandatory license plates, such scooters will be kicked off Boston sidewalks, because city rules require any plated vehicle to be parked in the street. And that’s likely to spell parking nightmares for scores of Boston-area scooter owners, who will now have to battle with cars and trucks for precious on-street spaces and metered spots.

“I can imagine that on August 1 every scooter you see on the sidewalk is going to have a ticket on it,’’ Mayen said. “I wouldn’t be surprised if most of the people want to bring the bikes back.’’

San Francisco and other cities have redesigned some parking spaces so that they can accommodate several motorbikes per car-length space. Such innovations are foreign to the Boston area - though that might need to change, and soon.

“As this is becoming a reality now, we’re rolling up our sleeves and trying to get a better fix on the alternatives,’’ said James Gillooly, deputy commissioner of the Boston Transportation Department.

In the meantime, scooter owners who park on a city sidewalk will be subject to a $65 ticket, Gillooly said - assuming they don’t try to get away without putting license plates on their vehicles. Mopeds, which are required to have stickers but not plates, will continue to be allowed to park on sidewalks.

Scooter dealers, drivers, and parking officials alike from various cities said they were caught off guard by the new law, which was passed in January but only this week is being publicized.

Phil Eckelkamp of Somerville owns an old Austrian Puch scooter that gets 80 miles per gallon. He’s not sure what he’ll do if he can’t park on the sidewalk anymore.

“The fact of the matter is I won’t be able to lock it to anything, unless you want me to lock it to the bumper of the car in front of me,’’ he said. “My bike weighs 100 pounds. It can be lifted up and put into a trunk.’’

Ann Dufresne, spokeswoman for the Registry of Motor Vehicles, said the new law wasn’t created to punish scooter owners. Its real aim is to make scooter drivers more accountable for their actions, because without license plates, it’s extremely difficult for police to issue parking tickets or to cite drivers for running red lights, splitting lanes, or committing other moving violations.

The new law will not affect “legitimate’’ moped owners, she said. Massachusetts defines a moped as a two-wheeled vehicle with an engine capacity of 50 cubic centimeters or less whose maximum attainable speed is 30 miles per hour.

The new law creates a third category of motorized bike, one that includes scooters too fast to be mopeds but not fast enough to exceed the 40-mile-per-hour minimum of motorcycles. Previously lumped in with motorcycles, the speedier scooters will now be considered “limited use’’ vehicles and will bear license plates that begin with the letters LU. Owners must have them registered, insured, and annually inspected, like a typical car or motorcycle, but will not be allowed to drive them on divided highways or in bicycle lanes.

A large number of scooters on the street today, including the popular Metropolitan, the Vespa LX 50, and Piaggio Fly 50, fit this description, according to dealers, owners, and manufacturers’ websites.

Had these vehicles previously been registered correctly as motorcycles, the transition to “limited use’’ vehicles would be relatively painless for most operators. It’s not clear how many scooters that would be affected by the law are on the roads in Massachusetts. But some authorities believe most are illegally registered as mopeds.

In some cases, the faster bikes were being marketed or sold specifically as mopeds, with consumers none the wiser. (Mayen’s three most popular bikes, which he markets as mopeds, are, in fact, all capable of reaching 39 miles per hour, according to the manufacturer’s website.) In other cases, consumers might simply have overlooked the fact that the floor model they chose could reach 35 miles per hour as opposed to 30.

Or, some owners were cognizant of the law, but chose to register as mopeds so they could park on sidewalks, avoid the hassle of paying insurance, and save themselves the trouble of obtaining a motorcycle driver’s license.

Cheating has been easy because the Registry relies on the word of the drivers, requiring they fill out a 1-page form, pay $40, and affix a tiny sticker on the vehicles they register as mopeds - but not that they submit to an inspection that might verify the class of vehicle.

Leigh Foster, 22, owner of a brand-new Honda scooter, was skeptical that the Registry would be able to enforce the new law any better.

“How are they going to be able to tell how fast I can go?’’ she asked as she parked her scooter, a Metropolitan whose top speed is listed by Honda as 40 miles per hour, on the sidewalk outside a Brighton supermarket. Foster said she had no idea how fast her scooter could go and that she had registered it as a moped.

Indeed, Registry officials said they have no information about how fast any of the mopeds currently registered can go because they’ve never asked for that information.

Ascertaining the speeds of individual scooters won’t be easy, either, as a host of variables come into play, among them: the weight of the operator; the quality of the manufacturer; air pressure in the tires; and whether or not there’s a device on the engine that restricts speed.

Foster didn’t foresee the new law as being a problem for her, in any case, because she never rides faster than 25 miles per hour. One of the few ways that law-enforcement officials can easily determine whether scooters can go faster than the legal limit for mopeds is by clocking them on the road.

Foster’s moped registration sticker, meanwhile, is valid through December 2010, as are all the stickers the Registry has issued this year.

Still, Dufresne said that it’s the responsibility of scooter owners to comply with the change, adding that it’s a $100 fine to operate an unregistered vehicle.

Brookline officials have already banned sidewalk parking for all vehicles, even mopeds. In Cambridge, parking chief Susan Clippinger said her department, in an effort to promote energy-saving vehicles, has not aggressively ticketed mopeds parked on sidewalks, even though they are not allowed. However, henceforth, she acknowledged that anyone who parks a bike with a license plate on the sidewalk will run the risk of getting a ticket.

“You’re just going to hope you won’t be tagged,’’ she said.

© Copyright 2009 Globe Newspaper Company.
07/12/09 Know the colors of the road in Mass.
Your comment is subject to the rules of our Posting Policy
This comment may appear on your public profile. Public Profile FAQ