Sand sculpting festival draws competitors from around US 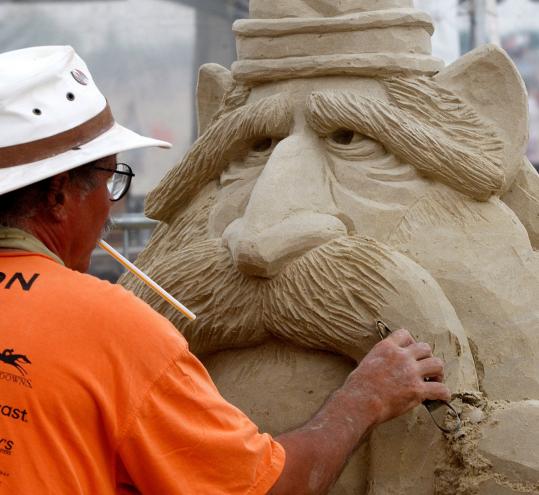 Justin Gordon of Groveland worked on “It’s No Yolk’’ yesterday during the annual New England Sand Sculpting Festival at Revere Beach. He held a straw in his mouth to blow away sand as he cut to create the sculpture. (Barry Chin/Globe Staff)
By Nandini Jayakrishna Globe Correspondent / July 18, 2009
Text size – +

REVERE - They call it ‘spart.’ Half sport. Half art.

It was a skill they learned puttering around sandboxes, friends’ driveways, or beaches. Today, many of them are local, national, and international champions, celebrities in the arena of sand sculpting.

Armed with trowels, balloon pumps, kitchen spatulas, food-decorating pens, brushes, and straws, the eight sculptors from around the country have gathered at Revere Beach this week to compete in the sixth annual New England Sand Sculpting Festival.

“Most of us started it as a hobby,’’ said Meredith W. Corson, 53, of Treasure Island, Fla., a former competitor who is playing an organizational role at this year’s event. “You find out as you go along that you can make a living out of it. To be able to make your passion your profession is truly incredible.’’

The three-day competition, which ends today, gave each sculptor 24 hours to carve out images of their choice from 10 tons of sand imported from a quarry in Hudson, N.H. The event is organized by the Revere Beach Partnership, a nonprofit that helps revitalize and preserve the beach, in collaboration with the Department of Conservation and Recreation, the Department of Public Works, and private sponsors.

Yesterday the sculptors worked within metal fences, while beachgoers young and old stood gaping as a few quick shovels - a touch here, a scratch there - turned shapeless mounds of sand into a smiling sun, an angry serpent, and a giant human finger.

“This is sketching in three dimensions,’’ said Carl Jara of Cleveland. “I just let the piece evolve from nothing.’’

Justin Gordon, 52, of Groveland, was making an elf, whose pointed ears emerged from a block of sand as he carved it with a spatula.

Matthew M. Long, 54, an artist from Staten Island, N.Y., worked on ’’Spheres of Influence,’’ a piece he envisioned as several carved spheres held up by a human hand.

Next to Long, Sue McGrew of Tacoma, Wash., who in her 20s is the youngest competitor, sculpted a shattered mirror. With headphones on and her back toward onlookers, she worked furiously, drawing perfect straight lines with a trowel and shaving off bits of sand with confident strokes.

The half-finished sculptures were impeccable, masking the hours of strenuous labor the sculptors put into shoveling sand into wood or plastic forms, mixing in water, building 8- to 10-foot-high pyramid-like “pound-ups,’’ and chiseling out their desired shapes.

Ryan L. Pratt, 24, of St. Louis, was impressed with the sculptors’ stamina as they piled sand into their forms, one shovel at a time.

“I’m glad I’m on this side of the fence,’’ Pratt said. “I’ve only built a small sand castle, and that’s enough work for me.’’

Marketing Inc. raised about $90,000 for the event, down from $115,000 last year, said Vice President Erin K. Lynch. The Department of Conservation and Recreation covered labor costs worth about $10,000, said Wendy Fox, a department spokeswoman.

This year, organizers changed the judging process, inviting competitors to determine the winners. Previously, the contest was judged by local celebrities, politicians, and artists, leading to debates about objectivity and ability.

“It takes plumbers, electricians, and carpenters to build a house, but you’re not going to have the plumber certify the electrical work,’’ Corson said. “We know the medium better than anybody else.’’

Under the new rules, participants will judge every sculpture but their own and assign letter grades on difficulty, originality, quality of sculpting, and overall appeal. The top winner will take home $5,000. An award will also be given to the piece the public votes the best. Each sculptor will receive written critiques from the other participants.

Jara, who placed first at the last two competitions, said the new method is fairer.

“Each piece is judged for its own merit, not against another piece,’’ he said.

Though Long said he is excited about the opportunity to learn from the comments of his fellow sculptors, he wondered if they might be restrained in their critiques because their comments won’t be anonymous.

But yesterday most of the competitors seemed oblivious to winning or losing as they worked meticulously, taking quick breaks for drinks or to acknowledge the crowd.

Jara, who walked around inspecting the birds he had built, joked that he had no idea where his piece would end up. Next to him, Dan Belcher of St. Louis followed a carefully drawn sketch of an Ouroboros, an ancient symbol of a serpent eating its tail.

The creations the sculptors devote so much thought, time, and emotion to will wash away in a matter of weeks. But there is an upside.

The awards ceremony, live music, and a fireworks celebration at the beach tonight will mark the end of the festival.