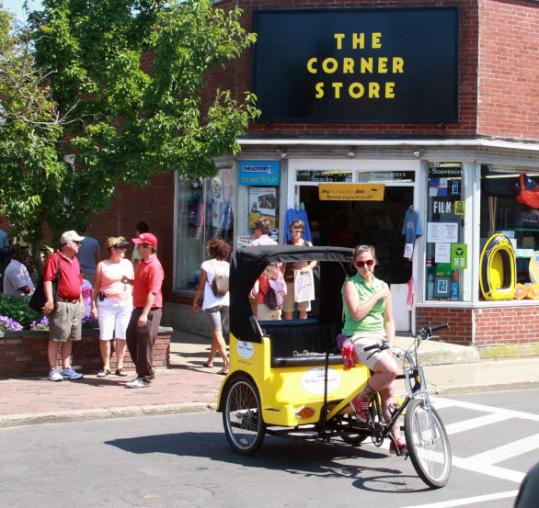 The Obamas could be spotted on Circuit Avenue, the main street in Oak Bluffs, next month. (Vincent Dewitt for The Boston Globe)
By Matt Viser Globe Staff / July 18, 2009
Text size – +

It’s official: The sandbox for the stars is once again becoming a presidential playground.

President Obama and his family are planning to vacation on Martha’s Vineyard next month, the White House confirmed yesterday without releasing details.

The visit, which will occur during the last week of August, has been rumored for months, and the Secret Service has already booked reservations at several hotels. It is unclear where the family of four will stay, but one option could be Oak Bluffs, the historical center of the island’s black community.

The Democratic enclave should be a comfortable spot both politically - Obama won all six Island towns in the presidential primary, some by a 2-to-1 margin - and because the president has vacationed there several times before.

One of his top advisers, Valerie Jarrett, frequently vacations there, and Obama held fund-raisers on the island for his presidential campaign. He also held a cocktail fund-raiser in Chilmark to raise money for his 2004 Senate race, and once met director Spike Lee there during a reception.

“I owe you a lot,’’ he told the filmmaker, according to the Chicago Sun-Times. During one of the Obamas’ first dates, they saw Lee’s film “Do the Right Thing,’’ and Michelle allowed her future husband to touch her knee.

Although Ulysses S. Grant spent time in Oak Bluffs, the island has most recently been associated with Bill Clinton, who stayed there numerous times during his presidency. Hundreds would line the tarmac at Martha’s Vineyard Airport awaiting the arrival of Air Force One.

But will Obama, who has taken several cues and staffers from Clinton administration personnel, also decide to steal away for a morning round at the Farm Neck Golf Club? And will he again bring the massive motorcade to Mad Martha’s in Vineyard Haven for a few scoops of mango ice cream?

Susan Milligan of the Globe staff contributed to this report.