Rules out killing of animals 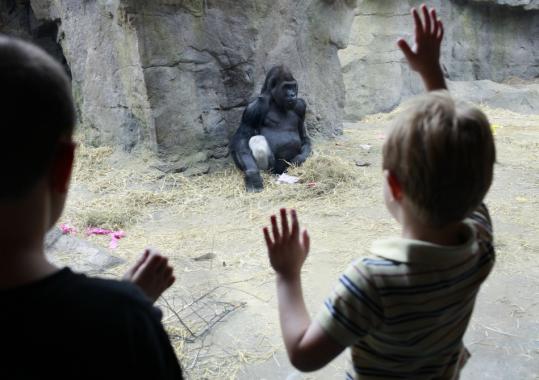 Governor Deval Patrick yesterday accused Zoo New England officials of creating a false and inflammatory scare with their warning that state budget cuts may force them to close two Greater Boston zoos and euthanize some animals.

“As a supporter of the zoo and a parent who has visited often, the governor is disappointed to learn that Zoo New England has responded to this difficult but unavoidable budget cut by spreading inaccurate and incendiary information,’’ Kyle Sullivan, a spokesman for the governor, said in a statement.

And a second Patrick aide emphatically ruled out the killing of any animals.

“There will be no consideration given to euthanizing any animals under the state’s watch,’’ said Joe Landolfi, Patrick’s director of communications. If the zoos were to close, Landolfi said, the state would work to find new homes for the animals.

State officials told the Globe that they are trying to find ways to salvage the zoo operations, but that Zoo New England’s handling of the budget crisis hasn’t been helpful.

“In the midst of an economic crisis like this one, when families and businesses alike are making sacrifices, we would all do well to remain level-headed and focus on solutions,’’ Sullivan said.

The current problems of Zoo New England, which runs Franklin Park Zoo in Dorchester and Stone Zoo in Stoneham, stem from Patrick’s decision June 29 to veto $4 million in funding from the nonprofit’s annual budget. That reduces the state appropriation by 61 percent, to $2.5 million.

On Friday zoo officials released a statement saying the funding reduction might require them to shutter both zoos. Then on Saturday, they issued a statement that said state bureaucrats - and not animal-care professionals - would be responsible for deciding whether some animals would have to be killed if the zoos closed.

Among the options under consideration is shuttering the smaller Stone Zoo and moving its animals and exhibits to Boston, officials said. That would reduce Zoo New England’s overall operating costs and make the flagship Boston facility more prominent. Some state lawmakers have said they would try to override the governor’s veto of zoo funding, which would require a two-thirds’ vote of both chambers of the state Legislature.

Zoo officials have used the prospect of euthanizing animals in prior fights against state budget cuts. Faced with similar funding reductions in the early 1990s that forced the closure of the Stone Zoo, officials initially said many of those animals would have to be euthanized. But none were. Instead, most were moved to the Franklin Park Zoo until 1994, when the Stone Zoo was reopened.

The two zoos have 1,300 animals of 260 species, including gorillas, tigers, capybaras, and peacocks. It employs 165 full-time employees, 65 teen employees, and 25 interns.

Sullivan, the governor’s spokesman, also said yesterday that Zoo New England is responsible for finding a way to keep its gates open. The zoos received about 40 percent of their total funding last year from admissions, memberships, donations, and other private sources.

At least one visitor to the Franklin Park Zoo yesterday suggested the operator solve the budget crisis on its own.

“I wonder why the Franklin Park Zoo doesn’t raise their prices so they can support themselves,’’ said Emanuel Achidiev, 28. “They shouldn’t have to rely on the state.’’

Achidiev and his wife, Tatiana, Brighton residents, brought their 18-month-old son, Ariel, to the zoo yesterday. “He’s just beginning to understand what the zoo is all about,’’ Tatiana Achidiev said. She said she feared her son would not get to take advantage of the local zoo as he grew up.

Natashia Tidwell, 39, of Cambridge took her 16-month-old son, Ellis Barnes, on his first trip to the zoo yesterday. Ellis’s first word was “cat’’ and Tidwell was excited to show her son some of the big cats: the lions and tigers.

“This is his very first trip and maybe his last,’’ she said.

Matthew P. Collette can be reached at mpcollette@globe.com.