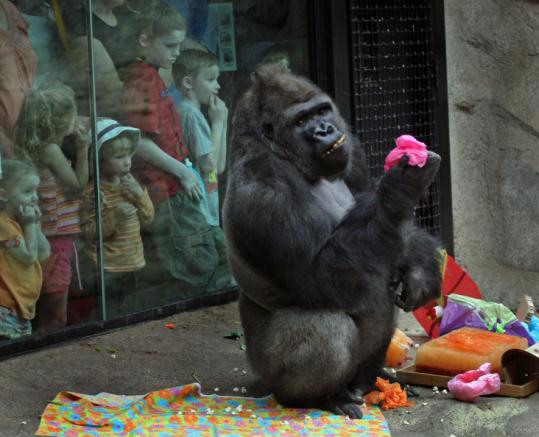 Zoogoers reacted with shock and sadness yesterday to Zoo New England’s assertion that it might be forced to shut both of the Boston-area’s zoos and turn over control of animals to the state, a move zoo officials said could lead to the euthanizing of some animals.

But even as several legislators vowed to override him, Governor Deval Patrick stood by the budget veto that slashed zoo aid from $6.5 million to $2.5 million in the belief that the private-public partnership can find a way to stay open by reducing its costs or raising money from visitors and donors.

“Like families throughout the Commonwealth, the state must cut back, and the $4 million reduction to the zoo budget is just one example of spending decisions we’ve made to live within our means,’’ Patrick’s spokesman, Kyle Sullivan, said in an e-mail yesterday.

The governor cut the zoo funding as part of nearly $150 million worth of line-item vetoes he said were painful but necessary measures to balance the budget he received from the Legislature, as tax revenues continue to fall because of the troubled economy.

But state lawmakers in the House and Senate yesterday said they would push for the needed two-thirds majorities in both bodies to override the veto and restore full funding for both zoos in fiscal 2010, which began last week.

In addition to losing the zoos as an economic and cultural resource, Massachusetts would end up on the hook for care of the land and animals under state law if Zoo New England folds, Representative Elizabeth A. Malia said yesterday.

“Cutting a budget for something like the zoo is a much larger project than just cutting the numbers off the page,’’ said Malia, a Jamaica Plain Democrat. “It’s not just that you can move the furniture out and lock the doors, and that’s it.’’

Senator Steven C. Panagiotakos, the chief budget writer in the Senate, said he thinks both the House and Senate veto votes will materialize.

“I don’t think anyone wants the consequences or the results that we’ve heard in the letter,’’ he said, referring to the letter zoo officials sent lawmakers warning that the budget cuts could lead to the zoos’ demise.

Senate minority leader Richard Tisei, a Wakefield Republican whose district includes the Stone Zoo, said he considered Patrick’s zoo cut a political move as much as a financial one.

“I don’t know if it’s to build public support for another tax increase or they think these are easy targets, but I would hope that the Legislature has the good sense to override the veto,’’ said Tisei. “It’s not a partisan issue. It’s more a question of using sound judgment when you’re looking for vetoes.’’

Zoo officials have sounded warnings in the past, including after a 2002 cut that stripped funding from $6 million to $3.5 million.

The latest budget cuts to the zoos angered some Greater Boston residents, who yesterday said they understand the need to pull back on state spending during tough economic times but believe lawmakers are making slashes in all the wrong places.

“It is a sad day when legislators think they can quietly cut the budget for the zoo to close the gap,’’ said John Hitt of Milton.

He and his family crowded inside the Franklin Park Zoo’s Tropical Forest exhibit yesterday morning with dozens of others to celebrate the birthdays of western lowland gorillas Okie and Gigi.

Children pressed their faces against the glass, as Okie, who turned 16 yesterday, and Gigi, who will be 37 tomorrow, came barreling into their den, colorfully decorated with streamers, tiny paper umbrellas, and beach balls stuffed with popcorn. The children shouted with glee as the pair tore apart their large, sand-castle shaped ice cake made of orange Kool-Aid and raspberry Jell-O.

“I grew up watching these gorillas,’’ said Rachel Hitt, John’s wife, who has been coming to the zoo since she was a young girl and now, at 41, brings her own family at least once a year. “If the zoo were to close, it would be very hard to get it back.’’

For generations the Franklin Park Zoo, which is in a section of Boston where Dorchester, Roxbury, and Jamaica Plain meet, has drawn city and suburban families.

Lashea Williams, 20, of Lynn, takes her 9-year-old brother, Isaiah, there as often as she can. When she heard the zoo was threatening to close its doors, she was deeply upset, she said.

“I already have a problem with budget cuts, so this one is just irritating,’’ said Lashea, adding that she has seen many programs for people with special needs, like her brother, lose funding. “This is somewhere he really enjoys.’’

Both zoos together attracted nearly 570,000 visitors over the past year. They provide child-friendly fun and education, residents said.

“It will be big blow for the community if they close,’’ said Parshant Kumar, who was resting on a bench at Stone Zoo with his 2-year-old daughter, Sanvi.

“Every now and then, I pick up my daughters and bring them to learn about the animals. It is a learning step for children.’’

Franklin Park Zoo would have to lay off most of its 165 employees in addition to finding homes for more than 1,000 of its animals if it were to close. If zoo officials fail to find places to send the animals, they said state authorities might have to decide whether to euthanize as many as 20 percent of them, a prospect that disturbed many visitors yesterday.

“Oh no, no, that is terrible,’’ Faith Imafidon, 23, said upon hearing the news. “Can’t they put them in another zoo, train them so they can go back to the wild or something, anything?’’

But the zoos cannot possibly find housing for so many animals, said Mathieu Michaud, a sales associate for Stone Zoo, at the zoo’s ticket booth yesterday.

“Basically we are just looking for the most support as possible,’’ said Michaud, who has a young daughter and would be adversely affected by the loss of his job.

Some visitors at Franklin Park Zoo yesterday said it has looked rundown in recent years.

“They have not been great for many years,’’ said Bridget Connolly, who grew up in Danvers and has been coming to the zoo since she was 4. Connolly, who works at a nursing home, often brings clients and their families to the zoo.

Louie Comeau of Wakefield pointed to the murky waters where the Chilean and Caribbean flamingoes stood at Stone Zoo.

“I do not understand why some of the money from the stimulus package cannot go into taking better care of the animals,’’ he said.

The zoos are operated through a public-private partnership funded by taxpayers and revenues from visitors. Adult tickets to Franklin Park Zoo are $13 and $7 for children, ages 2 to 12. At Stone Zoo, adult tickets are priced at $10 and at $6 for children 2 to 12.

Many visitors said yesterday they would be willing to pay extra to keep the zoos open and the animals safe.

“Sure I would pay more,’’ Imafidon said, who lives 10 minutes away from Franklin Park Zoo and said she cherishes her first experience there on a rainy day during an elementary school field trip.

“It is such an integral part of your childhood, not to see the animals on television but in front of you,’’ she said.’’ I cannot imagine children who will not have that experience.’’