Obama hand-delivers missive to the Vatican 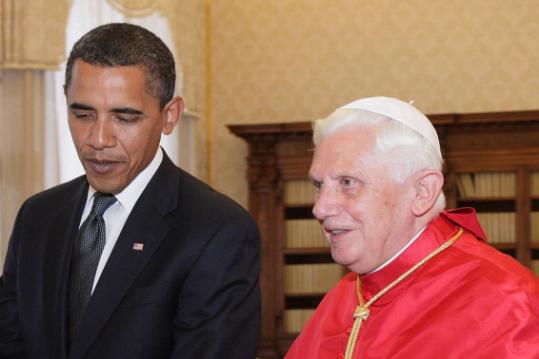 Senator Edward M. Kennedy, the ailing scion of the nation’s most famous Catholic family, drafted a personal letter to Pope Benedict XVI that was hand-delivered to the Vatican yesterday by President Obama.

Although neither the Vatican nor Kennedy’s office released details of the letter and the White House said the president had not read it, the missive immediately captured the imagination of Catholics, reinforcing the sense of the senator as someone reaching out for help and reminding the nation of the special place the Kennedys have held in American Catholic lore.

The president, who has become a close ally of Kennedy since the Massachusetts Democrat endorsed his presidential campaign, asked the pope to pray for the senator during a meeting at the Vatican. After the meeting ended, Obama phoned the senator and talked with him for 10 minutes to fill him in on the conversation.

“I find it quite moving,’’ said the Rev. Robert P. Imbelli, a Catholic theologian at Boston College. “Clearly, when one Catholic asks another to pray for him, this is a sign both of vulnerability and of trust. To have the opportunity to ask that of the pope is, in addition, a sign of devotion and respect for the one Catholics hold to be the successor of St. Peter with a special role in maintaining the unity and apostolic tradition of the church.’’

Catholicism runs deep in the Kennedy clan, “as a cultural and ethnic identity,’’ said R. Scott Appleby, a historian at the University of Notre Dame, said, “Among individual members, the depth of commitment to the church itself varies, as with many Catholic families. It seems clear, and it is poignant and instructive, that Senator Kennedy seeks peace and reconciliation with ‘Holy Mother Church’ as he nears the end of his earthly life.’’

Kennedy’s office declined to release the letter or discuss its contents. His spokeswoman, Melissa Wagoner, said by e-mail: “It’s a personal letter. End of story.’’

“Catholics and so many others reach out for prayers in their time of need, as Senator Kennedy does so now,’’ said Sister Mary Ann Walsh, spokeswoman for the US Conference of Catholic Bishops. “The entire Catholic community prays at Sunday Mass for the sick and for government leaders during the Prayer of the Faithful, and their prayers are with him. Senator Kennedy recognizes the prayerfulness of the Holy Father, and his reaching out to the head of the Catholic Church is a very understandable human and Catholic action.’’

The Rev. Thomas J. Reese, a senior fellow at the Woodstock Theological Center at Georgetown University, pointed out that the delivery of the letter also reflects the president’s acknowledgement of the role played by the pope for Catholics.

“This kindness to Kennedy shows that Obama recognizes the pope is a pastor and not just a world leader,’’ Reese said.

The Kennedys have long had a special relationship with the Catholic Church by virtue of their prominence in American politics. Kennedy’s father, Joseph P. Kennedy, was US ambassador to Britain when he represented the United States at the coronation of Pope Pius XII in 1939. Since that time, many members of the Kennedy family have met with various popes. When Senator Kennedy’s older brother, John F. Kennedy, was running for president in 1960, he had to battle anti-Catholic complaints that he would be controlled by the Vatican. He famously overcame such concerns to become the nation’s first Catholic president, a fact the White House cited yesterday in announcing its delivery of a letter from the senator to the pope.

“The president delivered a letter from Senator Kennedy to the Holy Father,’’ the deputy national security adviser, Denis McDonough, told reporters aboard Air Force One after the meeting.

“He also asked that the Holy Father pray for Senator Kennedy, who as we all know is ill, and whose brother obviously broke an important barrier in our country by being the first Catholic president . . . of the United States,’’ said McDonough, whose brother is a priest and who has talked in recent days about the impact of Catholic social teaching on his own views.

But he has largely ignored the periodic denunciations by conservatives within his church. After his mother died, he attended daily Mass for a year. Before he got sick, he periodically attended Mass in Washington and on the Cape and attended key ceremonies of the Archdiocese of Boston and other major church events, including the funeral of Pope John Paul II in Rome.

In 2005, when Benedict, then Cardinal Joseph Ratzinger, was elected to the papacy, Kennedy issued a congratulatory statement, saying, “Vicki and I congratulate Pope Benedict XVI and pray that his pontificate will bring healing to the entire world and to all people of every faith.’’

Last year, when Benedict visited the United States, Kennedy issued a statement welcoming him and attended the papal Mass at Nationals Park in Washington,

“Pope Benedict’s visit to the United States and our capital city,’’ the senator said, “is an extraordinary opportunity to strengthen and reflect on the power of faith during this difficult time for our country and for the entire world.’’