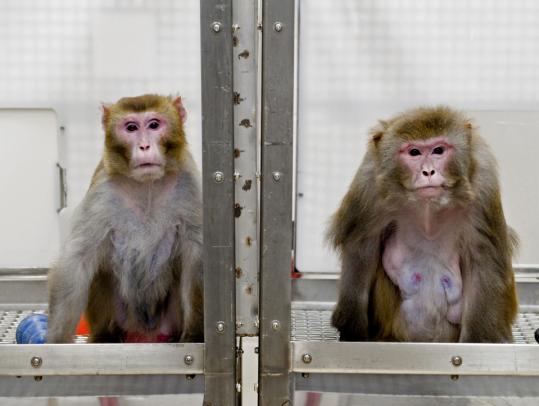 Rhesus monkeys, 27 (left), on a restricted diet, and Owen, 29, on an unrestricted one, are among the oldest surviving subjects of the two-decade study. (Jeff Miller/University of Wisconsin - Madison)
By Carolyn Y. Johnson Globe Staff / July 10, 2009
Text size – +

Wisconsin researchers reported yesterday that rhesus monkeys on a low-calorie diet live longer and healthier lives, a finding two decades in the making that suggests such diets might slow aging in people, too.

Scientists have long known that dramatically cutting calories can extend the lives of yeast, flies, and rodents, discoveries that have sparked a fevered quest for a human fountain of youth. The new study in monkeys, a genetic cousin of humans, gives researchers hope that they are on the right track.

“For 70 years, people have been wondering whether this phenomenon that occurs in rats might also occur in humans,’’ said David Sinclair, a pathology professor at Harvard Medical School who was not involved with the study. “What this paper says is while we don’t know for sure, we’ve got one extra point on the side of the people who believe it will work in humans.’’

Because of the long lifespan of people and the rigors of the diet, studies of calorie restriction in humans are ongoing and have yet to produce definitive results.

Scientists said the monkey study is a significant advance in a story that began in 1935, when researchers first discovered that a nutritious but calorie-restricted diet served as a fountain of youth for rodents.

That finding grew into a body of research revealing the beneficial effects of calorie restriction in other species, and prompted a search for drugs that would exploit the same biological pathways without requiring people to go on drastic diets. Sirtris, a Cambridge company that Sinclair cofounded and was bought last year by pharmaceutical giant , is a leader in these efforts.

Sinclair’s discovery that resveratrol, a natural ingredient found in red wine, could mimic the effects of calorie restriction in yeast and fruit flies has helped fuel over-the-counter sales of resveratrol products. It also spurred Sirtris to create drugs that mimic resveratrol but are more potent and might be used to treat diseases of aging. The company is testing one such drug in people with type 2 diabetes.

Using another approach, researchers reported in the journal Nature this week that rapamycin, an organ transplant drug, significantly extended life spans in mice. But much remains unanswered. A study last year reported that resveratrol had health benefits for adult mice but did not help those fed a standard diet to live longer. Researchers also cautioned people not to take rapamycin because it suppresses the immune system.

In the new study, published in the journal Science, researchers followed a group of 76 rhesus monkeys that took different paths in adulthood. Half were put on a diet consuming 30 percent fewer calories and half continued as before.

The monkeys on a normal diet also looked visibly older - their eyes sunken, coats thinner and posture cramped - than their dieting counterparts, according to Ricki J. Colman, lead author of the paper and a scientist at the Wisconsin National Primate Research Center.

“This report in my mind represents a major transition in our project. For years, we’ve been asking the question: ‘Will caloric restriction slow the aging process in monkeys?’ Now we think that we have accumulated solid data to say yes, it will,’’ said Richard Weindruch, a professor of medicine at the University of Wisconsin at Madison and senior author of the paper.

Leonard Guarente, an MIT biologist who did pioneering work on aging yeast and sits on the scientific advisory board of Sirtris, said the diet’s strongest result was in preventing diabetes. But he called the study preliminary and questioned the authors’ decision to exclude deaths deemed to not be related to aging.

“I would say that this study provides hope that it [calorie restriction] will combat diabetes and metabolic diseases, but the question of other diseases and actually living longer are still open questions,’’ Guarente said.

Weindruch is careful to call the new study an interim report, with one of the most important questions still to be answered: how long will the 33 remaining monkeys - 20 on the restricted diet, and 13 eating normally - ultimately live? The average lifespan of a rhesus monkey in captivity is 27 years.

Susan Roberts, director of the energy metabolism laboratory at the Department of Agriculture Human Nutrition Research Center on Aging at Tufts University, points out that the animal study can’t address many aspects of the diet, including the psychological effects: Are the monkeys hungry? Happy? Able to react to stress?

She is studying 72 people in one branch of a national calorie restriction study intended to tease out the health and psychological effects.

“This is a good study, one that we have been waiting for a long time,’’ Roberts wrote about the monkey research in an e-mail. “It adds to the evidence piling up that calorie restriction, independent of thinness, is a healthy way to stay alive and healthy longer.’’