On tiles, a story of gentrification 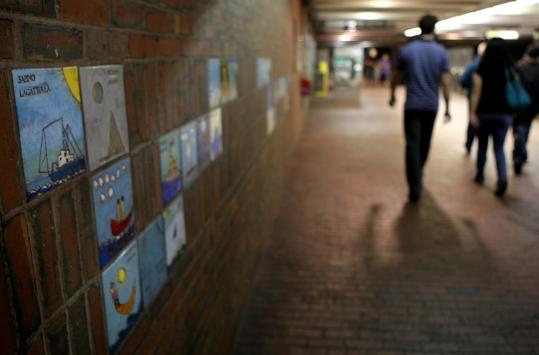 Many commuters walked by without pause at artwork created about 30 years ago by Somerville schoolchildren in the Davis Square MBTA station. (David L. Ryan/Globe Staff)
By Noah Bierman Globe Staff / July 10, 2009
Text size – +

It’s been about 30 years since schoolchildren in Somerville created the artwork for a series of tiles - crudely drawn sailboats, rail cars, and clowns - that now adorn the Davis Square T station’s brick entrance wall.

Many commuters walk by without a pause. But a group of community arts organizers believes these 249 tiles tell the story of a neighborhood that has changed as much as any in Greater Boston in the 25 years since Davis Square got its own subway stop along the MBTA’s Red Line.

In April, members of the Davis Square Tiles Project began an effort to track down the people - now probably between 35 and 45 years old - who created the artwork to find out how their lives have changed and how they view the changes in their old neighborhood.

They want to tell the collective story of the community’s gentrification, with all the complexity and individuality that it entails, and start another conversation about the changes that may come when the Green Line extends into new neighborhoods in Somerville, and Medford over the next five years.

The work in progress, posted on www.davissquaretilesproject.com, is something like a reverse time capsule - coupling the ageless artwork of children with the words, insights, and in some cases photographs of the adults they grew into.

“How many people walk by those tiles and think they were made by some third-grader this year?’’ said Sabino Lagattolla.

Lagattolla, who drew a sailing ship under a beaming yellow sun when he was in second grade, is now a 38-year-old network engineer, living in Hudson with a wife, two children, and another baby due in November. He visits his old hometown with his family, to soak up the past and to stock up on steak at McKinnon’s Meat Market.

His father was a pipe fitter, his mother a seamstress. They all moved to Somerville from Southern Italy in 1972. Lagatolla remembers the community’s ills - the drug problems that plagued some of his neighbors - and a tight-knit spirit that allowed him to ride 15 blocks on his bicycle without worrying his mother. He only regrets that he could not afford to take over the house he grew up in when his father died in 2000.

Another child of Davis Square, Damien McCaffery, drew a blocky sneaker with big white laces when he was 11. On the project’s website, next to the image of the sneaker, he has since posted modern photos of himself, one next to horses and another sitting in an urbane restaurant.

“I went back and it freaked me out,’’ the 39-year-old Brooklyn resident wrote. “Davis Square used to be a seedy area but a decent place to get a slice and a coke, or catch a game over a beer, but now appears to be a terrific place to sip a latte and, I don’t know, shop for a fair trade booster seat?’’

But his feelings are conflicted. In an interview, McCaffery, who works for magazines, admits Somerville has become exactly the type of place he and his girlfriend would embrace in their current lives. “I’m the worst sort of critic,’’ he said. “I left. I look back. Everything’s changed. Boo hoo hoo.’’

So far, 27 former schoolchildren have posted responses, ranging from a quick sentence to a few pages of deep insight. Almost all the participants have moved to a new town, a new neighborhood, or a new state. At least two of them have died, according to a project organizer.

The story of Davis Square’s change has been widely documented. But the tile project demonstrates there are hundreds, if not thousands of individual versions.

“People talk about diversity in a sort of very shallow way - this is a real snapshot of a pretty wide-ranging group of kids,’’ said Nick Jehlen, a 37-year-old Somerville native who conceived of the project as an outgrowth of an activist arts organization called The Action Mill.

The initial drawings were transferred to tiles and assembled by a pair of artists - Jackson Gregory and Joan Wye - who worked with an art teacher at the former Powderhouse Community School in 1979 and 1980 to turn the children’s art work into a lasting installation. The collection, unveiled in 1983, was part of a pioneering MBTA program, Arts on the Line, that has been replicated across Boston’s public transit system.

Jehlen has been eyeing the tiles for years, coveting “possible access to 249 stories.’’ He notes that if a similar children’s art installation were assembled today, parents might be too fearful to include their children’s names, making follow-up projects like this impossible.

Katie Hargrave, the project’s co-director, is an artist born a year after the T station opened. She moved to Davis Square from Chicago because of the access to Brandeis University for graduate school.

She wears funky glasses, hangs out at the independent coffee shop, and is well aware she is part of the cultural change that some of the former child artists now assess with mixed emotions.

“We’re certainly not trying to make a judgment call as to what Davis should be,’’ Hargrave said.