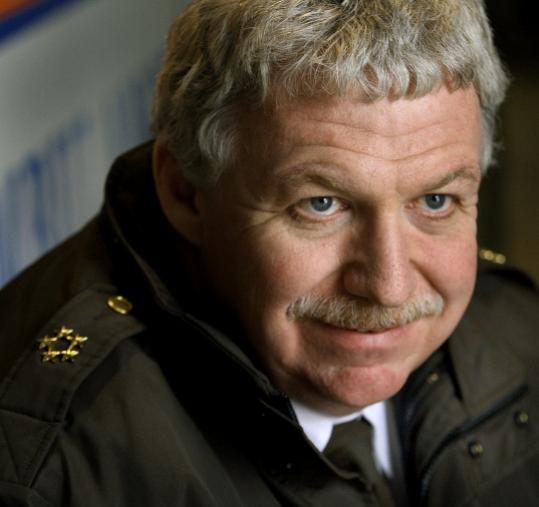 Richard A. Serino, 55, became a Boston emergency medical technician when he was 19. He is credited with turning the city’s EMS department into a nationally recognized organization. (Bill Brett for The Boston Globe)
By Milton J. Valencia Globe Staff / July 10, 2009
Text size – +

Richard A. Serino, the unassuming Dorchester native who climbed the ranks from Codman Hill to the head of Boston Emergency Medical Services over the past 36 years, has been chosen by President Obama to assume the number two post at the Federal Emergency Management Agency.

Obama announced yesterday that he is nominating Serino as deputy administrator of the federal agency. Pending Senate approval, the 55-year-old could be designing emergency response plans for major cities across the country and managing responses to disasters ranging from hurricanes to terrorist attacks.

In his new position, Serino would serve at a critical time for the country’s homeland security operations and would lead an agency that has come under criticism for its poor response plans before, particularly the handling of Hurricane Katrina in 2005.

“I am honored, but truly humbled,’’ said Serino, a father of three whose wife is an emergency room nurse. To think, he said, “I’m just a kid from Dorchester.’’

The opportunity came as a surprise. He received a call from Washington, D.C., asking if he was interested, to which he replied, “I don’t know, let me talk to a few people about it.’’ And within weeks, he was told the job was his if he wanted it.

Across the city yesterday, public officials and community representatives said the job was well deserved, crediting Serino with transforming a small emergency response team into a nationally recognized emergency management agency. They praised him for evolving personally from a young paramedic into a chief of a department that handles 100,000 medical calls each year, coordinates medical safety for massive celebrations, and manages major disasters.

“Richie’s one of those special guys, always there,’’ Mayor Thomas M. Menino said yesterday. “He’s thorough, astute, a big win for the federal government. You couldn’t ask for a better individual.’’

Said Fire Commissioner Roderick Fraser: “Rich has strong leadership, a great set of management skills he can take into his new position. I’m happy for the guy.’’

Tall and barrel-chested, Serino never shies from being at the center of command posts in the city’s largest operations, ranging from the recent Green Line trolley crash that sent dozens of people to the hospital to preparations for celebrations following Red Sox World Series wins.

David Mugar, executive director of the Boston Pops Fireworks Spectacular, recalled Serino as just a young paramedic patrolling in the early years of the Fourth of July celebration. Now in its 36th year, the event has grown to become the most famed in the country, and Serino and his operation have grown alongside with it, Mugar said.

Nearly four decades ago, Mugar pointed out, EMS had as few as two ambulances, while today Serino oversees a crew of some 300 paramedics and emergency management technicians.

“There’s just no comparison today at all, and what I’ve watched is his ability to grow with it,’’ Mugar said. “I’ve seen him get to the very top of the Boston EMS, and he brought everyone along with him. He’s a leader.’’

Having held jobs ranging from EMT to superintendent to chief, Serino also serves as assistant director of the Boston Public Health Commission. He has spoken at Harvard and Boston universities about homeland security and emergency preparedness strategies and served as a national faculty member for the US Department of Defense Domestic Preparedness Program.

In addition, Serino has participated in senior leadership programs in national preparedness and homeland defense at Harvard’s Kennedy School of Government and at the Naval Postgraduate School, Center for Homeland Defense and Security.

But in Boston, he is known as the chief from Dorchester, whose parents grew up in Dorchester, who went to St. Gregory Elementary School and then Catholic Memorial High School. He has two brothers, one who lives in Peabody and another on Cape Cod.

If approved, Serino would be based at FEMA headquarters in Washington, D.C. Much of his duties would be administrative. But the chief, who still recalls his days as a volunteer on one of the city’s few ambulances decades ago, said he hopes to help on scene with some of the country’s most critical events, as well.