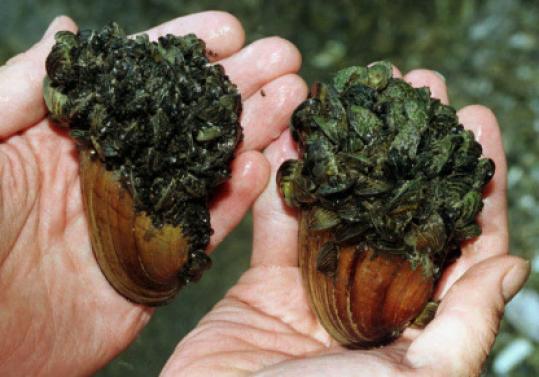 A freshwater mussel that has wreaked economic havoc throughout the Great Lakes has been found for the first time in Massachusetts, and worried environmental officials are scrambling to contain the invasive species before it wipes out native marine life, clogs water intake pipes, and fouls drinking water supplies.

State officials yesterday closed a popular boat ramp on Laurel Lake in Lee and Lenox where a beach worker discovered the thumbnail-sized zebra mussel in late June on a beer can that washed up on shore. They don’t know how the mussel got into the lake, but speculate it may have hitchhiked on a boat that had been in an infested waterway.

Officials are now racing to assess whether the tiny mussels, which can colonize in dense layers up to a foot thick, have already reached other waters in the Berkshires. While there is no known way to eradicate mussels from a lake or pond, boaters can stop their spread by disinfecting and drying boats before entering another waterway.

“We take the threat of zebra mussels very seriously,’’ said Richard K. Sullivan Jr., state Department of Conservation and Recreation commissioner. “Unfortunately, it is not a surprise . . . but we are doing everything we can to prevent it from spreading further.’’

Zebra mussels are among the most problematic of invasive species, alarming scientists, business owners, and public officials - and it’s not only because their razor-sharp shells wash up on shores by the ton.

They encrust docks, boats, and even slow-moving animals such as native clams. They can also cling to one another and clog water-intake pipes, which has proved disastrous for power companies, steel plants, city water supplies, and golf courses, according to the US Geological Survey. Great Lakes industries have had to retool water-intake systems with filters and screens or use chemicals to prevent zebra mussel problems. The US Fish and Wildlife Service estimates the mussels will cost the Great Lakes region billions of dollars over the next 10 years.

Microscopic juvenile zebra mussels can also be sucked into boat cooling systems and grow until they completely clog them.

Originally from Russia, the mussels were first found in 1988 in Lake St. Clair, between Lake Erie and Lake Huron, and probably traveled there in the ballast water of a trans-Atlantic freighter. Within a decade, the mussels had spread to all five Great Lakes, and today they are found throughout that region, as well as in Vermont, Connecticut, and many other states.

Massachusetts officials have prepared for the mussel’s arrival. They developed a rapid response plan in 2005, which includes public education and possible requirements to isolate infested waterways. But there is little hope that any state can prevent their spread indefinitely.

“There are things we can do like inspections and cleaning,’’ said Amy Benson, a USGS fishery biologist in Florida who runs an invasive species database. While chemicals can kill the mussels, they are so hardy that virtually everything else in the water would be poisoned along with them. “We can do a pretty good job to slow them down for a long time . . . but they can hide in the smallest places,’’ Benson said.

The mussels also have a deep ecological impact. Their heavy feeding clears the water of plankton. While water becomes clearer - in Lake Erie water clarity has increased from 6 inches to 30 feet in some areas according to the USGS - it removes food for other animals. Also, as the lakes become clearer, some aquatic plants grow that benefit other fish, ultimately changing the natural ecosystem.

At Laurel Lake, the discovery has disappointed some people who now cannot boat on the scenic lake. But Dmitri Consolati, a maintenance worker at Lee’s Sandy Beach who first saw the mussels, says his discovery might help prevent its spread.

Consolati was raking the beach when he saw a discolored beer can. On it were tiny organisms that looked similar to those in a zebra mussel pamphlet his mother had recently brought home.

“I was going to throw it away but saw these barnacle-looking things,’’ said Consolati. He called state officials, who this week confirmed it was a zebra mussel.

“I actually think it might be in other lakes around here but not discovered yet,’’ he added.