Regatta for blind tests sailors’ feel for the sport 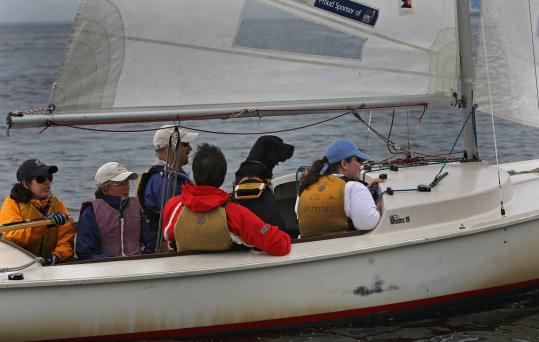 Nina Kagan, who is blind, controlled the tiller yesterday in one of three boats competing in the race sponsored in Boston Harbor by the Carroll Center for the Blind in Newton. (David L. Ryan/ Globe Staff)
By Vivian Nereim Globe Staff / July 8, 2009
Text size – +

CHARLESTOWN - With one minute until the race begins, Bill Rapp yells from the back of the sailboat, “Ready about!’’ The sail swings, and the four-member crew scrambles into position. Barreling through Boston Harbor, they are off.

Matthew Chao, who cannot see the course ahead, the sails above, or the tiller he holds in his hand, feels the air on his face. He shifts, steering the boat gently.

Yesterday morning, Chao and fellow crewman Bruce Howell, who are both legally blind, competed against two other boats crewed by blind sailors, finishing first after a smart steering decision put their boat in the lead. The milelong race from the Charlestown Navy Yard to the Boston Harbor Hotel was the first annual Carroll Cup Challenge, hosted by the Carroll Center for the Blind.

Assisted by Rapp and Lisa Dalton, trained guides who provided a stream of precise commands, Chao and Howell felt their way through the race. They felt the wind’s direction and the rustle of the sails. Chao felt the tiller’s vibration, making quick judgments on which direction to steer. Howell felt the tension on the rope in his hands.

“Just because you’re blind doesn’t mean your life is over,’’ said Chao, who was born blind and has competed in seven world championships for blind sailors. He said he has taken home two medals: a silver in 1997 and a bronze in 2006.

Chao learned to sail as a student at the Perkins School for the Blind. He took the sport up again years later when he heard that the Carroll Center for the Blind, located in Newton, sponsored a sailing program.

“Remember the old ad, ‘Corn flakes again for the first time?’ ’’ Chao joked. “It was like that.’’

Nancy Jodoin, who began to lose her vision two years ago, started sailing with the Carroll Center last summer.

“It’s such a sense of freedom and accomplishment,’’ she said. “Sailing gives you that independence.’’

“You can just feel yourself floating,’’ she said.

Yesterday, the blind sailors said that a feeling of empowerment comes through communication and a generous measure of trust. The sailors must rely on the guide’s vision, but they rely on their own senses, too.

“As Clint Eastwood said, ‘Man’s gotta know his limitations,’ ’’ explained Ryck Lent, a lifetime sailor who lost his vision due to a degenerative condition called retinitis pigmentosa. While knowing his own limitations, Lent said, he will not just “sit back and be a passenger.’’

Sailing blind requires a balance of humility and guts, many sailors explained.

Mary McKinnon, who has been a guide for 12 years, understands the difficulties from both sides. Legally blind for 16 years, she regained vision in one eye after surgery.

She had been a member of the Carroll Center’s SailBlind program before the operation and stayed on as a guide. McKinnon’s knowledge of the sailors’ challenges gives her a nuanced compassion.

When she was sailing blind, she said, guides would give her instructions like, “There’s a puff coming in.’’ Instead, McKinnon said, she helps her sailors feel the puff on their own.

“Mary taught us how to use our other senses,’’ said Jodoin.

Chao said tuning in to the boat is a peaceful experience. “There’s nothing like it,’’ he said.

Moments before Chao and Howell’s boat crossed the finish line yesterday, Dalton called out, “We’re going to win the Carroll Cup!’’ and shook Howell’s shoulder in celebration. “Ready for the pictures?’’