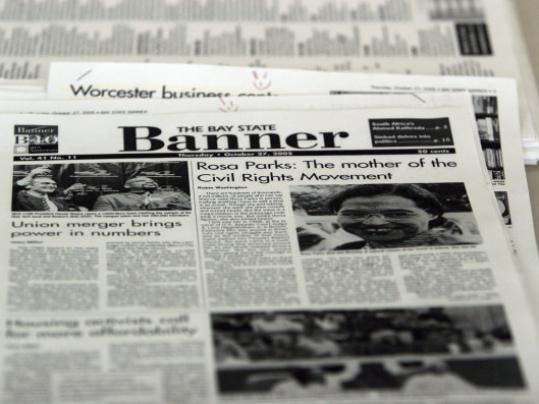 The impending shutdown of the Bay State Banner, the only Boston newspaper focused exclusively on the black community, leaves a gap in the city’s coverage of African-Americans and raises questions about the survival of small, minority-owned papers in this recession.

Yesterday, as readers, community activists, and city officials began to mourn the loss of the 44-year-old weekly publication, publisher Melvin Miller said that he hopes an investor will save the Banner before it closes this month. The last issue is set to come out tomorrow.

“I would hope that before it’s too late that people step forward to decide, even though we are in the middle of a recession, that this is the time to step forward,’’ said Miller, 75, who blamed the paper’s troubles on the economic downturn and the advertising slump.

From Beacon Hill to Grove Hall, residents, activists, and politicians yesterday expressed a mix of shock and sadness over the paper’s demise. Mayor Thomas M. Menino said while he didn’t always agree with the paper’s stance on issues, the Banner’s clos ing is “a loss’’ of the “voice of the community.’’

“Losing that voice is not helpful,’’ Menino said. “It’s a fabric of the community that people look forward to every week not just because of the news stories but . . . all the stories that are covered by the Banner . . . not covered by other folks.’’

Governor Deval Patrick agreed, saying he had a personal connection to the paper. “It’s a channel that has been enormously important to me,’’ he said.

The Banner was formed in 1965, the era of urban renewal and civil rights. Over the years, the free paper, which started out as subscription-based, grew to a circulation of 30,000 copies. It chronicled the biggest stories in Boston’s black community, among them the school busing crisis in the 1970s and, in the 1990s, the successes of local pastors’ work with police to reduce crime.

More recently, the Banner criticized the Boston Police Department for a lack of black officers. It called out politicians who Miller believed didn’t have at heart the black community’s best interests. The paper also regularly challenged Menino on issues such as development in the city’s poorer neighborhoods.

Some readers yesterday said the paper informed them of news in their own backyards, from Mattapan and Dorchester to Roxbury and Jamaica Plain, and gave local minority entrepreneurs a place to showcase their businesses.

“It’s shocking news,’’ said Kueen King yesterday in between answering the phones in her Grove Hall beauty salon Kings & Kueens. “I read about a lot of my clients in the paper, and a lot of my family members - even me - advertise in the paper.’’

Small independent minority publications such as the Banner are proving more vulnerable to the economic realities that have plagued major dailies across the country. The reasons: niche audiences, a smaller pool of advertisers, and a lack of financial reserves.

“This recession has been a ferocious one for all media, newspapers in particular,’’ said Lou Ureneck, chairman of the journalism department at Boston University’s College of Communications. “Papers that define themselves by ethnographic niches may end up relying more on shallower advertising bases.’’

To be sure, the Banner recently has gotten noticeably lighter because of fewer advertisements. The first issue this month, with a lead story on Michael Jackson’s complex relationship with his race, had 19 pages, compared to 30 pages the year before.

Despite the paper’s legacy in Boston, quickly finding an investor to salvage the paper, which has 12 full- and part-time employees, may be difficult, Ureneck said. “This is a tough time to find somebody willing to make that kind of commitment.’’

This isn’t the first time the paper has faced closure. Miller launched the Banner on Sept. 25, 1965 as a 10-page broadsheet. A year later, the paper went out of business for four weeks. But when the community called for its return by pressuring local businesses to advertise, the paper resumed printing.

“We have been the strongest advocate for the interest of the community,’’ Miller said. “We have constantly had the ability to explore complex issues and make it plain and simple so everyone can understand it.’’

With the paper’s demise, Joseph Feaster, a local lawyer who is active in the black community, worried about the future of small and minority newspapers. “The communities of color have lost a voice - a publication that has consistently presented positive stories about activities and events in our community,’’ said Feaster, a longtime reader.

But other readers were more critical. The Rev. Eugene Rivers, who has been faulted in the pages of the Banner, said the paper failed to take a greater, critical leadership role in the black community. Still, he said he considers the Banner’s current troubles “a huge loss’’ and called on the city’s black leadership to save the paper.

“I’m amazed that an appeal was not sent out’’ to the community, he said.

Robin Washington, the paper’s former managing editor, is trying to do that, by appealing to all journalists - from Gwen Ifill to June Cross, among others - who are among the paper’s alumni, to contribute stories to the paper’s website.

“I’ll do it, and if we each wrote only one, the queue would be full for years to come,’’ he said in an e-mail. “All of Boston has benefited, and continues to benefit, from the Banner.’’