Gardner Museum tears down structure at heart of dispute 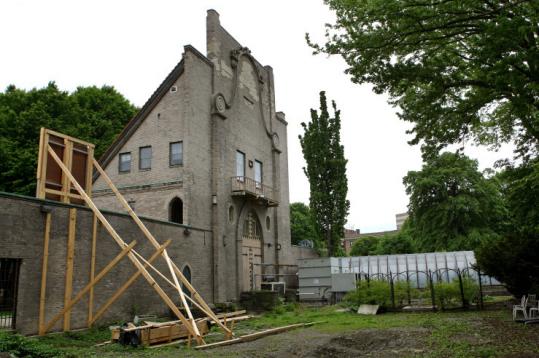 A building with an intimate connection to one of Boston’s most celebrated figures, Isabella Stewart Gardner, was smashed to the ground yesterday at the back of the museum that bears her name.

The so-called carriage house was razed to make way for new museum buildings designed by the architect Renzo Piano. The museum gained all the necessary approvals for the action from the relevant preservation bodies, including the Boston Landmarks Commission and the Massachusetts Historical Commission.

Plans to demolish the carriage house became acutely controversial in May, when staff inside the museum drew attention to a new essay by scholar Robert Colby exploring the historical significance of the building.

The controversy increased after the museum’s director, Anne Hawley, told the Globe that she had not been aware of the building’s historical context until after plans for its demolition were presented to the Boston Landmarks Commission - even though that context had been spelled out in an essay by her predecessor, Rollin Hadley.

Despite attempts by the museum to characterize it as a mere “garage,’’ the carriage house was, for Gardner, more than just a place to keep her carriage. Like the rest of her unusual “palazzo,’’ it was always intended to evoke wider, symbolic meanings.

Colby’s essay explains that Gardner started planning the carriage house less than three months after opening Fenway Court to the public in 1903. Her original design was not built. It was supplanted by a 1907 design that featured a whimsical facade based on a building in the southern Italian town of Altamura.

Hadley explained that it was not the town itself Gardner was interested in alluding to. Rather it was an aesthetic utopia called “Altamura’’ that had been imagined by her collaborator, the great Renaissance art historian Bernard Berenson, in an essay of 1897. The “Altamurans’’ in that fictional essay lived in a palace monastery where art was believed to possess redemptive and spiritually elevating powers.

Gardner had read the essay six months before beginning to build her museum. She eventually based the facade of the carriage house on the building in the town of Altamura after Berenson sent her a postcard of it.

The Globe obtained photographs of what the carriage house looked like in Gardner’s day, but the museum refused permission to reproduce them. The photographs show the ornate facade in the middle of a high wall extended by even higher trellises. On the outside was a public walkway, Italianate trees, and careful landscaping. Now, all that remains is a huge pile of splintered wood and rubble.