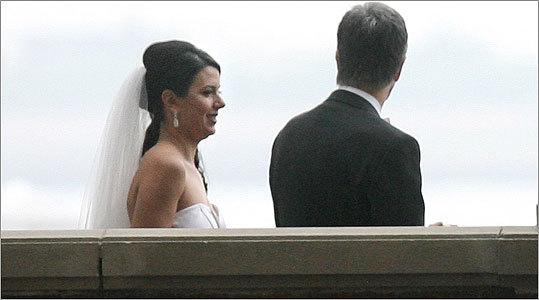 Amid fanfare yesterday worthy of the World Series, Red Sox owner John Henry married Linda Pizzuti, who has been a fixture on his arm since the two met a year ago.

Surrounded by 50 or so friends and family members, the couple were married in the late afternoon onboard Henry’s 164-foot yacht, the Iroquois, with a reception featuring the music of Maroon 5 held afterward in the outfield at Fenway Park.

There were no sausage vendors on Ipswich Street as long black cars pulled up at Gate B and deposited dapper guests at the curb. More than 400 people were invited to the reception, which was notable not only for its lavishness - a red carpet welcomed guests to the park - but also for its intense security. Anyone working the event was prohibited from having a cellphone, and guests were asked to refrain from taking cellphone images that might surface on the Internet.

Henry, who will turn 60 in September, met the 30-year-old Pizzuti last summer at Alibi, the bar at the Liberty Hotel. Though recently divorced from his first wife, the Sox owner was instantly smitten and pursued the raven-haired Pizzuti. In a recent Boston magazine story, Pizzuti said she initially rebuffed her millionaire suitor, but finally relented. Since last fall, the two have been inseparable, appearing together at ballgames and benefits, and traveling extensively.

From Rowes Wharf, the wedding party could be seen late yesterday snapping pictures on the deck of Henry’s yacht as the boat drifted in the harbor, the Boston skyline used as a background for the photos. Once on shore, the couple were taken by limousine to Fenway. The reception was held under an enormous tent in the outfield - fortuitous, considering the storms that descended late afternoon - and guests were invited to tour the historic ballpark.

For months, Henry and Pizzuti had taken classes to prepare for their first dance. The couple chose Michael Bublé’s rendition of the Cy Coleman classic “The Best Is Yet to Come.’’

Meredith Goldstein of the Globe staff contributed to this report.