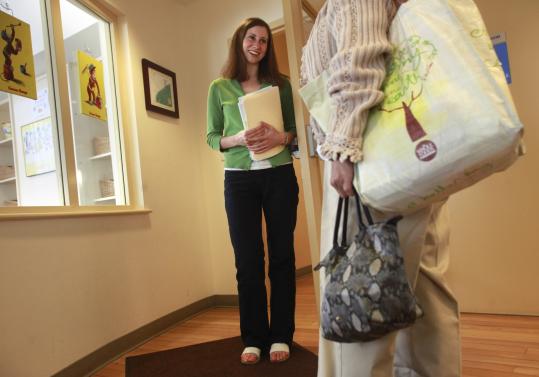 Laura McNulty, who works at the Somerville office of National Student Partnerships, said goodbye to client Maria Selamoglu after she helped her locate a permanent residence in Somerville. (Maisie Crow for The Boston Globe)
By Tracy Jan Globe Staff / June 25, 2009
Text size – +

WALTHAM - College students, many of whom spend the little extra cash they have on pizza and laundry, don’t fit the typical profile of a wealthy benefactor. But in a growing national movement, students enrolled in newly created philanthropy courses are steering thousands of dollars to local charities.

At Tufts University, students decided this spring to give $1,500 to expand English courses to immigrant parents in Medford. Northeastern University students donated about $2,500 to a Boston after-school program promoting cross-cultural tolerance through cooking. And students at Boston University distributed $7,500 to help local at-risk teens land jobs in the financial sector.

At least 10 New England colleges, including Brandeis, Holy Cross, Boston College, Wheelock, and Lesley, will offer similar courses next school year, using seed money donated by corporate and family foundations. In the classes, students draw up mission statements for makeshift foundations, research nonprofits in their communities, and decide how to allocate the pot of money.

The goal, say professors and donors, is to build upon surging interest in social responsibility among college students and make philanthropy part of the mainstream curriculum. A potential side benefit: helping colleges improve town-gown relations and, some professors said, cultivate future alumni donors.

“Some of these kids will become very wealthy in the future,’’ said Paul Schervish, a sociology professor and director of the Center on Wealth and Philanthropy at Boston College, who will soon begin teaching experiential philanthropy classes. “The professors see that this is a way to teach financial morality in the realm of philanthropy.’’

But teaching students how to give away money responsibly is more complicated than one would think, said academic leaders who gathered recently at Brandeis’s Sillerman Center for the Advancement of Philanthropy for the first national conference on teaching philanthropy. The Waltham college started a “practicing philanthropy’’ course this spring for graduate students and plans to create a similar course for undergraduates next spring.

Students spent about two months debating their priorities, ultimately narrowing their focus to organizations committed to economic development, and early childhood education. Their task: find worthy recipients of a $40,000 donation from the Sillerman family.

“At first everyone thought, ‘Oh boy, this is going to be easy. We have money to give away,’ ’’ said Charley Francis, a 26-year-old master’s student in public policy. “But the fact that we’re giving away real money adds a real seriousness to it. It’s not just an academic exercise.’’

Francis and his classmates drew up criteria on which they would evaluate the nonprofits, conducted interviews and site visits, and combed through financial statements, ultimately awarding four local charities each $10,000.

Two national foundations interested in promoting the teaching of philanthropy on college campuses began donating money for the courses across the country in recent years. The Sunshine Lady Foundation, established by Doris Buffett, sister of famed investor Warren Buffett, has given colleges $10,000 a year to disburse since 2003. The foundation’s Learning By Giving program will double next year to include 15 colleges across the country, including Tufts and Holy Cross.

The foundation has ramped up its efforts this year because there are greater unmet needs of all types because of state budget cuts, said Alex Buffett Rozek, director of Learning By Giving, and grandson of Doris Buffett. Undergraduate business students, who may wind up working for large corporations with charitable trusts, should learn to look critically at the needs and to assess how money is to be spent in the most effective way, he said.

“There needs to be better awareness of how to distribute these scarce resources more effectively, and do due diligence on how the money is actually used,’’ Rozek said. “It’s not just writing a check and saying, ‘Put my name on this building.’ ’’

The recent efforts on college campuses also build upon donations by Fidelity Investments, which in 2007 teamed with Campus Compact - a coalition of more than 1,100 colleges working to build civic engagement into academic life - to give schools one-time grants of $15,000. Fifteen colleges, including BU and Northeastern, participate.

In addition to just giving money away, the classes have inspired some students to choose careers in the nonprofit sector. At Tufts, where classes have disbursed $30,000 in the past three years, students learn to be grant writers and discerning grant makers. Those skills helped Laura McNulty land a job at the Somerville office of National Student Partnerships.

McNulty, who graduated in 2008 with degrees in community health and Spanish, had written a grant for the organization during a philanthropy class her senior year. Her class awarded $2,500 to the national nonprofit, which organizes student volunteers in antipoverty work.

“The hands-on experience of writing a grant, evaluating a grant, and then giving real money away made the whole class feel like it had a tangible purpose,’’ said McNulty, 22. “It made students feel more accountable for the work they were doing.’’

Her grant-writing experience and knowledge of what foundations look for when making funding decisions was invaluable in helping her secure a $10,000 grant to start her own nonprofit, Health Horizons International, McNulty said. She will move to the Dominican Republic this fall to help connect volunteer doctors on medical missions with community health initiatives in the Caribbean nation.

Students at other schools have taken what they’ve learned in the classes and spread the philanthropy movement campuswide. Northeastern students started an extracurricular club last fall that operates as a de facto board of directors charged with overseeing, and growing, the pot of money students disburse through the philanthropy classes.

“The class inspired me to make a difference and build something that could go on year after year,’’ said Elumba, who graduated last month.

“In the future, these student athletes could go on to be professional athletes and make money with philanthropy instilled in them.’’