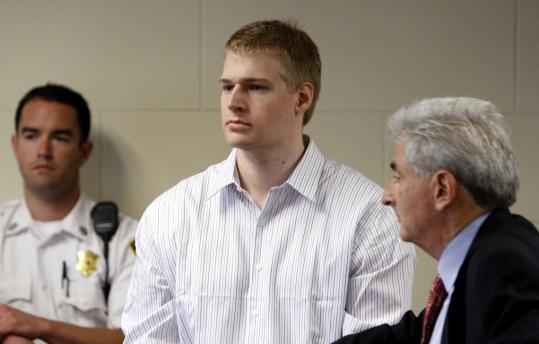 The lawyer for Philip Markoff, the 23-year-old former Boston University medical student who is accused of killing a New York woman he met through Craigslist, questioned the integrity of the grand jury process yesterday and challenged prosecutors to explain what they knew about the source of leaks to the media in this highly publicized case.

As Markoff stood, stoic and seemingly calm during his arraignment in Suffolk Superior court yesterday, his lawyer, John Salsberg, tried to cut off a prosecutor describing the allegations of murder and kidnapping against him.

Salsberg told Clerk Magistrate Gary Wilson that releasing such details “will not serve any other purpose but to continue to poison the prospective jury pool.’’

After the arraignment, Salsberg told reporters he was concerned the grand jury proceedings were not conducted appropriately.

He has filed a motion asking the court to force prosecutors to answer nine questions about how they shielded grand jurors from news reports of the case, including what steps the district attorney’s office took to protect the secrecy of the grand jury, whose proceedings are supposed to be confidential.

“What precautions were taken to make sure the grand jury were not exposed to the leaks?’’ Salsberg said. “I don’t know the answer to that. I’m asking the questions. They’re simple questions. They require simple answers, so we’ll see when they get answered.’’

A spokesman for Suffolk District Attorney Daniel F. Conley said prosecutors would address Salsberg’s questions in court today, when the defense motion is scheduled to be addressed.

Few new details emerged about the case during yesterday’s arraignment, which was packed with reporters, curious law students, and relatives for both Markoff and his alleged victim, Julissa Brisman, 25. Prosecutors said he shot her three times in the torso with a 9mm handgun he bought at State Line Gun Shop in Mason, N.H. Markoff is accused of using another man’s driver’s license to buy the weapon in February, when his fiancee, Megan McAllister, was out of town. She was not in the courtroom yesterday.

During the arraignment, Markoff never looked at his family or at Brisman’s. He spoke only three times, twice to say “not guilty’’ in a clear, confident voice and once to say yes to a clerk’s question.

Brisman’s mother, dressed in a gray suit, sat in the front row, quietly listening to Zabin as a friend clutched her hand.

In the back sat Markoff’s parents and brother, betraying little emotion. Asked for comment, Markoff’s mother quietly said no.

When a reporter persisted, asking whether the family still believed in Markoff’s innocence, they ignored the query.

“They’re sticking by him,’’ Salsberg said of Markoff’s parents.

Salsberg said he would try to have the indictment dismissed if it appeared the proceedings had been tainted.

But other defense lawyers said it is unlikely that would happen.

Grand juries, unlike trial juries, are made up of 23 individuals who hear evidence presented only by prosecutors, and indictment required only a majority vote, not a unanimous one. The case must still go before a 12-member jury, which would decide whether to convict Markoff.

“The grand jury is entitled to hear and does frequently hear hearsay information and evidence,’’ said Timothy M. Burke, a Needham criminal defense lawyer who was once a Suffolk prosecutor. “It’s not the same thing as a trial jury, where obviously the judge scrutinizes each and every juror as to what their present knowledge of the case is.’’

Burke said that by filing the motion, Salsberg may be trying to lay the groundwork for a future bid to have the trial moved out of Boston. The trial is tentatively scheduled for next June.

Matthew Machera, a former prosecutor, said the defense may be trying to make sure no more information comes out until the trial.

“It doesn’t sound like the DA’s office did anything improper,’’ said Machera. “Even if they did, it certainly doesn’t rise to the level of a dismissal. Unfortunately, in sensational cases like this, stuff tends to get out sometimes. We live in such a media state right now that information comes out instantly.’’