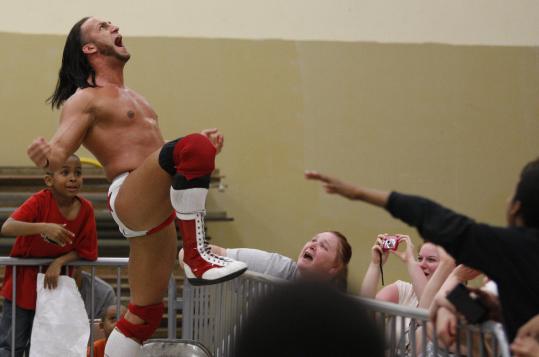 First, the ref disarmed wrestler "Psycho" of his hula hoop.

The other Chaotic Wrestling fighters wore Lycra shorts and knee pads. Psycho, a reported 192 pounds and 5 feet 10 - plus a few inches of hot-pink hair - wore a straitjacket under a yellow singlet stamped with a happy face. The ref patted him down and found gadget after gadget, plus a slice of pizza. Psycho ate it.

He wasn't set up for victory against 340-pound Brian Milonas. But when the big guy socked his head into a post, Psycho just laughed. Milonas won. The crowd booed. A fan shook her head, saying, "This is not a fair match."

It was a Saturday night in Lawrence at the Plains Community Center. Chaotic Wrestling Inc., a promoter that operates out of North Andover, had set up its ring in a basketball court with water-damage-streaked walls. About 90 people, mostly kids and families, drank cans of Market Basket soda and cheered for Psycho.

With that kind of passion and that little money, low-level professional wrestling has held up relatively well in the recession.

The economy has "hurt and helped us," said Mark Beaudry, one of Chaotic Wrestling's owners. On the one hand, he thought, more people stay home; on the other, local events benefit from fans downgrading from World Wrestling Entertainment shows. Tickets for the Lawrence show were from $5 to $15, while the WWE event next month in Hampton Beach, N.H., will cost you from $25 to $45.

Charles Woodard, 55, of Lawrence, backed that up: He's attended about one local match a month but hasn't seen WWE in ages. "We can't afford it!" Woodard said.

Chaotic's primary owner, Jamie Jamitzowski, said that "our audience is actually up right now." The promoter added about 10 shows in the past year, expanding from Lowell into Lawrence and Tyngsborough. Beaudry chalked up this April night's small crowd to beautiful weather and a Red Sox-Yankees game at Fenway Park.

Robin Grealey of Lawrence said she appreciates paying just $5 for children's tickets. Her young charges were too star-struck to notice the letters falling off the building's facade.

Chaotic and other local operations serve as the farm system for big-time pro wrestling. Active promoters in Greater Boston include the Millennium Wrestling Federation, New England Championship Wrestling, and and a number of smaller outfits, as unlikely as that may sound. But then, just about everything around local professional wrestling is unlikely. Including Psycho's popularity.

Psycho is Jarod Ceres, 26, a Middleton garbage collector by day. He leaned against a ring at Chaotic's North Andover training center, wearing a striped shirt and corduroy bucket hat over his dirty-blond hair. The blond was no more real than the pink: he dyed it for a wedding. Just behind his head, wrestlers slammed off the ropes, practicing double clotheslines.

Ceres hadn't been there for a while, recovering from his worst injury to date: a slam onto the edge of a board. (It could be worse: Chaotic trainer Todd Smith, "Handsome Johnny," said he wrestled with a broken back. The Lawrence shows were his first in three months. He trusted Milonas to be careful.

In fact, their match was tame. "I've gotten hit with a dog bone in the ring, a Nintendo," he said. He has wrestled while wearing a chicken suit. He is especially fond of food fights. One opponent took a coffee from a spectator and spat it in his face. Another grabbed chopped raw onions from a food vendor and stuffed them in Psycho's mouth. Another spat milk and cookies during a Psycho-mandated milk-and-cookie break.

Ceres started learning the basics seven or eight years ago. "I was very, very awful," he said. The high school goofball started acting up. He'd never heard of a comic wrestler. It evolved from his personality.

"I don't like it when people take stuff too seriously. It irritates me," Ceres said. He looked at a guy who looked perfectly content. "Michael, why are you so miserable?" he asked. He turned back and shook his head: "Can't take a joke."

At the end of the match, a roundly defeated Psycho agreed to join Milonas's campaign to win the title, then seemingly bit his chest. Did he really? "No!" Psycho said later. "That wouldn't be nice."

The move impressed Stoneham 10-year-old Robbie Wentzell, who declared the show "Awesome!" Psycho was his favorite. "He's crazy. He likes to bite."

Wrestlers on this level can make it to the big time. To get exposure, they typically perform in events run by several promoters; when healthy, Ceres aims for at least two weekends a month. WWE superstar Kofi Kingston came through the Chaotic ranks. "The Promise" Antonio Thomas, a.k.a. Tom Matera, said he spent three years in WWE before being dropped and returning to Massachusetts.

For all his popularity close to home, Psycho may never find a bigger audience. He went down to Delaware for a high-profile tournament and wasn't allowed to compete: No funny guys allowed.

Some fans "get very offended" by Psycho, he said. They think he doesn't take wrestling seriously. And his routines play up the - face it - inherent silliness of men grappling in hot pants.

Even a promoter who's employed Psycho, Dan Mirade of the Millennium Wrestling Federation, said his act is amateurish. "He doesn't belong," he said. Psycho "gets a small crowd to laugh at him," Mirade said, and "looks like a little kid dressed up for Halloween."

After his Lawrence bout, Ceres felt pretty low, upset and worn out. He put on his Boston Bruins shirt, ate an Italian sub and critiqued his performance. The match dragged on too long, he thought, and the crowd didn't seem really into it. At least his back felt fine. Soon he would start training for real again, get knocked around a bit.

The show ended. Wrestlers, staff, and volunteers broke down the ring and started carrying it out. Ceres, though, slipped to the side to shoot baskets. Other wrestlers joined in for a few minutes, then stepped away, leaving Psycho alone. His pink hair flamed in the fluorescent lights. He missed the basket. He missed again. And again.