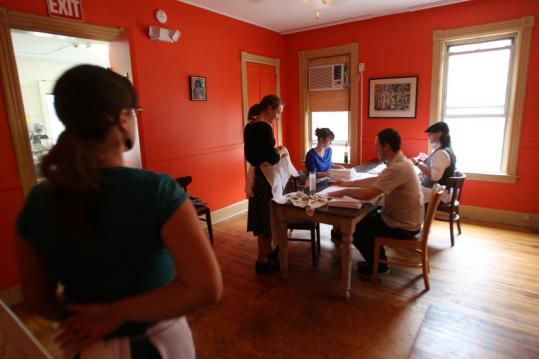 NORTHAMPTON - John Sielski and his partner, Jim Dozmati, have fallen on hard times. The owners of the venerable Green Street Café, a longtime favorite in this lively western Massachusetts city, they have remortgaged their house and sold off an adjacent piece of property, given up their private health insurance and signed onto the state plan, and slashed their employees' salaries by 20 percent.

Their woes are familiar in the midst of a battered economy. But the economy is not their problem, say the café owners, who have labored over signature dishes like escargot in parchment and chicken with peaches and sage for nearly two decades at the edge of the Smith College campus. Instead, they say, it is Smith - their landlord, closest neighbor, and, for many years, their best customer - that has driven them to the brink of closure.

The college is finishing construction this summer on Ford Hall, a gleaming science and engineering center next to the café. The $73 million, 140,000-square-foot structure, with state-of-the-art classrooms and an environmentally friendly design, is a striking addition on a campus where most science buildings date to the 1960s. It will house Smith's groundbreaking engineering program, the first in the country at a women's college.

But as Smith steps forward, say the restaurant owners next door, it has elbowed them out of the way. They say the college promised to relocate them but did not follow through, leaving them to suffer during two years of construction: trucks blocking their doors; noise and fumes; the loss of their parking lot for two and a half months. Most devastating was an eight-month closure, forced by problems with their Smith-owned building, that dragged on as they wrangled with the college over their lease.

The small-town feud has bitterly divided two institutions that were once a model of town-gown relations, and made things awkward for faculty and alumnae caught between their school and their love of a good meal.

"We thought we were in paradise here," said Sielski, 60, a white-haired native of the Pioneer Valley. "We were at the peak of our careers, with a wonderful following . . . Now all we want is to keep our restaurant."

College leaders say they have gone out of their way to help the café, offering moving expenses and halving the rent during construction. They say they have tried to minimize disruption, and were not responsible for the restaurant's closure because they did not acquire the building until 2007, just before building-code violations resulted in the loss of the café's liquor license.

What's good for the college will also boost the café, they said.

"With the opening of Ford Hall, the whole locus of activity is going to shift next door to them," said Laurie Fenlason, special assistant to Smith's president. "It's hard to see how that's going to mean less business."

Together for 32 years and married for five, Sielski and Dozmati moved to Northampton in 1990 from New York City, where they worked in catering and gardening. They restored a former rooming house on sleepy Green Street, and created a restaurant that felt like a dinner party, with its string of five small dining rooms, painted shades of wine or pumpkin, and presided over, always, by its two familiar hosts.

The café soon became a Smith College favorite, with as many as a dozen college receptions, dinners, and meetings held there each week.

With business holding steady, Sielski and Dozmati honed their menu. They focused on local foods, and started growing produce in a sprawling backyard garden: 18 kinds of heirloom tomatoes; lavender for crème brûlée; strawberries to be served with almond crème anglaise.

Their reputation grew, and so did their following. Rachel Maddow, an MSNBC TV personality, called the café her "home away from home" in Travel + Leisure magazine. It became a home for local artists, too, with weekly poetry readings, in-house exhibitions, and musicians playing nightly for dinner.

The neighborhood was heading for a change, however. Seeking room to grow, Smith spent years buying up properties on its perimeter. The college demolished several apartment buildings to make way for Ford Hall, sparking protests by neighbors. College officials have said they might expand more into the neighborhood, casting the café's future further into question.

As the college prepared to break ground on its science center three years ago, talks about relocating the café broke down. The owners found a space, but said renovations would cost $700,000. Smith offered $65,000. The restaurant stayed put.

To express their growing anxiety, Sielski and Dozmati hired an artist to paint a 30-foot mural on one wall. Titled "The Last Staff Supper," it depicts the café's owners and employees dining together in the shadow of Smith's wrecking ball.

In February 2007, just before construction began, the city seized the café's liquor license for code violations. Sielski says the building had been marked for acquisition by Smith for years, and that college officials told him they would repair it, but never did. Fenlason, the college spokeswoman, said Smith acquired the building the same month the license was stripped.

The café shut its doors, and missed the lucrative spring graduation season. Disagreement with Smith over its lease postponed its reopening for months, Sielski said. The couple's income disappeared and their debts mounted, while veteran staff and customers drifted away. When they reopened eight months later, in October 2007, they rallied their regulars to get them through the costly start-up, selling prepaid dinners at a discount. But they have not recovered. The café owes $150,000 in back taxes, Sielski said, and its survival is uncertain.

The restaurant owners took Smith to court in April to stop construction crews from taking over their parking lot for 10 weeks. A judge declined to halt the work, saying the likely damage to Smith outweighed the restaurant's pain.

The two men said they will fight on in court, seeking damages, an apology, and to save what they call their life's work.

The fighting has embarrassed some café devotees. "It's mortifying," said Carhart, the Smith alumna. "It hurts, because I think the world of Smith."