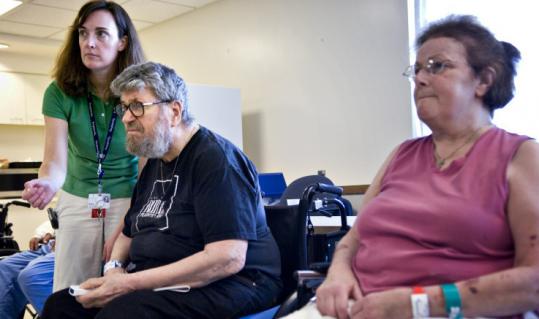 Guitar Hero became a video game cult phenomenon because of its ease of use: with plastic guitar in hand and colorful on-screen prompts, even the tone-deaf and uncoordinated can rock out. After years as a golden child in the gaming world, it has now become an instrument of healing.

A team of Johns Hopkins University engineers has found a way to modify the game so that people with amputated hands can still bust out power chords, allowing them to share in the fun, but also providing a way to motivate patients to perform strenuous physical therapy.

The modified Guitar Hero is one of several recent examples of "hacked" gaming equipment that has been customized for use by people with specific disabilities or medical conditions. Many were exhibited last week at the annual Games for Health conference in Boston, which had nearly triple the attendance as the first meeting five years ago.

"Wii-habilitation," or using games like Wii system to help patients regain movement and motor skills, is one of the key areas of interest that brought together engineers, doctors, game developers, and entrepreneurs. Researchers presented studies and designs that used video games to address everything from childhood obesity to dental surgery training.

"Healthcare is an enormous industry, and it's looking for big ideas," said Steve Downs, assistant vice president of the Robert Wood Johnson Foundation, a main sponsor of the conference. "Video games can be personalized, they are adaptive, and they are fun."

Off-the-shelf Wii games are already being used with patients, to help keep them engaged during physical and occupational therapy sessions.

Spaulding Rehabilitation Hospital in Boston began using the Wii about a year ago to help stroke patients with coordination and grip. Since then, it has expanded its use to treat spinal cord injury, muscular-skeletal disorders, brain injury, and more.

"I know zero about technology, but this is cool" said Suzanne Reardon, a 64-year-old from Middletown, R.I., who was transferred to Spaulding after having her knee replaced last week. In a therapy session Friday afternoon, Reardon competed against the Rev. Robert O'Shea of Boston, a fellow patient who had his knee replaced two weeks ago, in Wii bowling.

"This is really helping me with getting back balance and getting my body to work in harmony," said O'Shea as he tried to pick up the 7-10 split displayed on the 32-inch flat-screen television. "Plus it gives me a chance to discover talents I never knew I had."

Cara Brickley, the bowlers' physical therapist, said that while the Wii can't replace traditional therapy, it provides variation and fun that keep patients interested in their exercises. Some patients go out and buy the system when they leave because they are hooked.

"We have patients boxing against their doctors," said Brickley, referring to the Wii boxing game, which uses wrist motions to make an avatar move on screen. "It gets pretty crazy."

Sam Yohannan, a researcher and physical therapist who has been using the Wii in New York-Presbyterian Hospital's burn unit, said many burn patients are so traumatized and depressed from their injury that they have no motivation to complete physical therapy sessions that are crucial to maintaining range of motion and skin elasticity. That changed with the introduction of video games.

"It provides them with an escape," said Yohannan, a speaker at last week's conference. "The support and socialization really help in their overall recovery," plus the element of competition means patients often practice longer and more often.

Nathan Herz, an assistant professor in the occupational therapy department at the Medical College of Georgia, presented the results of a study comparing the progress of patients with Parkinson's disease using Wii with those who receive only traditional therapy to keep them active. While he found the Wii to be competitive with traditional therapy in several measures of mobility, he was most impressed by how much the Wii eased symptoms of depression in the patients while increasing their motivation.

"It gives you something to shoot for and gets you out of your rocking chair," said Bob Rohrman, a 67-year-old retired truck driver who has had Parkinson's disease for three years. After participating in Herz's program, Rohrman said, his range of motion and muscle control improved. Now he owns a Wii and challenges his daughter and grandson in bowling and tennis.

Following up on their success with modifying Guitar Hero for amputees, Jacob Vogelstein and Robert Armiger at Johns Hopkins have recently adapted the Wii in a similar way by reconfiguring the remote control to accept muscle signals from the residual limbs of amputated arms. Electrodes are attached to patients' skin and connect to the remote. Eventually, Vogelstein said, the goal is to develop a game that can be used specifically for this purpose.

Though games created for healthcare is a niche market, it is a sustainable market, said Downs.

"When you think of video games, you think of the teenage boy playing shoot-em-up games in his parents' basement," he said, "but that isn't the demographic anymore."

Tara Ballenger can be reached at tballenger@globe.com.