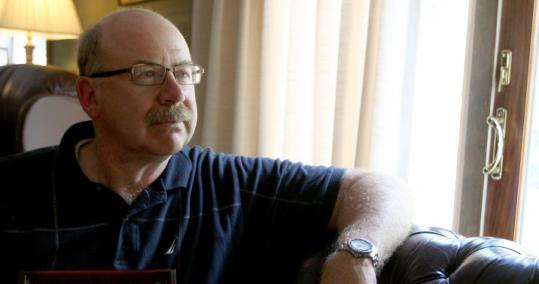 Widower John Belko is claiming the $178,496 found in an olf safe. He is one of several parties fighting over the money. (Essdras M Suarez/Globe Staff)
By Peter Schworm Globe Staff / June 13, 2009
Text size – +

METHUEN - For four decades, the 1-ton safe sat in the back of a family shoe store, and as the years rolled past, its secrets were seemingly forgotten. When the family closed up shop, renting the building to a shoe repairman, the safe stayed put. No one remembered the combination. No one knew what to do with it.

Now, everyone is rushing to stake a claim.

Dumped in a vacant lot in neighboring Lawrence last November as an obsolete, oversize nuisance, the old-fashioned vault was discovered to hold a small fortune - $178,496 in crisp currency. The money was packed in blue bank envelopes, wrapped in old Daher's Shoes shopping bags and a white T-shirt, and tucked in a locked compartment.

The surprise discovery is the target of an intra-family court battle involving four competing parties, though none can explain why someone would stash so much money away and apparently not tell anyone.

John Belko, the widower of Joyce Belko, who ran Daher's for years before dying of cancer in 2003, believes the money rightfully belongs to her estate. Joyce Belko's brother, Ken Daher, who bought the property in 1996, says it belongs to him.

Even the tow truck driver who was paid $200 to haul the vault away says he should get the money, as he is the last person to possess the safe. And the state government, after learning about the contested windfall in local press accounts, is chasing the money to recoup $162,000 in unpaid medical bills from the estate of Sally Daher, Joyce Belko and Daher's mother, who died in 2001 after spending several years in a public nursing home.

"It's the safe nobody wanted," said Lawrence Police Chief John Romero, whose department is holding the safe and money until the courts decide their fate. "And now, everyone wants it."

At Consentino Shoe Store and Shoe Repair, Ramez Youssef, an affable 42-year-old who runs the cozy, cluttered shop, points at the spot the safe once stood. It was as tall as a nearby refrigerator, he said, and definitely taller than him.

Tired of it taking up space in his crowded storeroom, Youssef turned to Manny Ovalles, a 51-year-old from Lawrence who owns a tow truck.

Ovalles hoped to sell it for scrap metal, but the junkyard passed, saying it was worthless. Fed up, Ovalles dumped it in a vacant lot next to his Lawrence home.

Three weeks later, firefighters on patrol spotted the abandoned box, one of its doors ripped off, seemingly empty save for some old papers and wind-blown leaves. But upon closer inspection, they discovered an inner compartment, which they opened with a torch and jackhammer, yielding the hidden treasure.

The secret stash included no bills printed after the early 1980s, Romero said. No one in the Daher family knew it existed.

In an interview yesterday near his North Andover home, John Belko, a 59-year-old financial analyst, said he believes his wife had quietly squirreled the money away over the years as a nest egg, but died without telling anyone. A sturdy man who said he still struggles to cope with his wife's death at age 52, Belko said he sometimes wonders why she never told him about the money, and wishes she had. But he is certain it was hers.

"I truly believe it was her savings over all these years," he said. "It was her business. She ran everything."

Describing Joyce as "the strongest woman I ever met," Belko said she somehow managed to care for her mother, raise two children, and manage the family business. He said that hectic schedule, combined with the abruptness of her death, must have made the money an afterthought.

"It was the last thing on her mind," he said.

Belko calls the money a curse that has torn a once-close family apart, and made it harder to move past his wife's death. He said he has not spoken to Daher directly about resolving the matter but has "extended several olive branches" through another brother-in-law.

"This whole thing has added a dimension of pain," he said.

Ken Daher, who did not respond to an interview request, told police his mother must have "owned the safe years ago" and saved the money over the years. In court documents, he said he never authorized Youssef to remove the safe from the shoe shop.

"This property was removed from the rental unit known as Consentino Shoes," he wrote in an affidavit. "I did not authorize the removal and disposal of this property."

Yesterday, Youssef said neither Daher, nor anyone else in the family, ever expressed interest in the safe and that he was told he could do with it as he pleased. He is confident no one knew its contents, he said.

If he had known, he would have been honest, he said.

"I told the landlord [Daher], maybe he gives me half," he said, a glint in his eye.

For his part, Ovalles, the tow truck driver, said he assumed ownership when he was paid to remove the property.

"I think it's my money," Ovalles said. "I was the last person to have it, and he [Youssef] paid me to move it."

Meanwhile, the state is also pursuing the windfall. A spokeswoman for the state's Health and Human Services office declined to comment on the case, citing privacy restrictions. But she pointed to regulations allowing the state to recoup money for Medicaid services, specifically nursing home care.

The idea that the money could go to the state brings Belko to a boil.

"I'd rather burn the money," he said, citing a litany of pension and corruption scandals on Beacon Hill. "I'm protecting my wife's estate for my boys."

Luis Brea, a 60-year-old from Lawrence who works in the shoe shop, theorizes that the Dahers were trying to hide their money from the state, believing their life savings could be wiped out by the cost of the nursing home.

"If you have nothing, they get nothing," he said. "If you have a penny, they take a penny."

Amid all the competing claims, the police department has had enough. Last week, the department filed a petition seeking to have Essex Superior Court take the money and determine its rightful owner.

"Please take it off our hands," said Romero, the police chief.