In portraits of loss, an artist's gift of solace 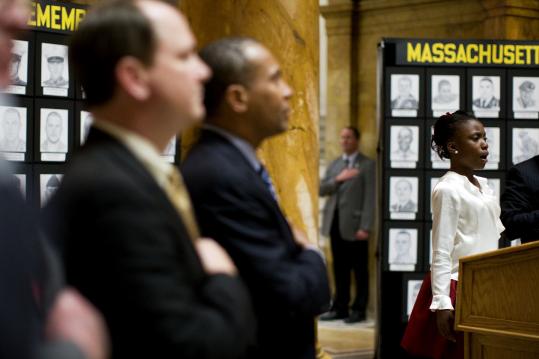 The portraits of the dead were arranged in alphabetical order in rows of eight: an orderly grid of loss. Far from the portraits, the flashing cameras, and milling dignitaries at the State House, Paul Monti of Raynham sat quietly in the back row. Holding a copy of the drawing of his son, he described how the 30-year-old, Sergeant First Class Jared Monti, died during a battle with Taliban insurgents in 2006.

Yesterday afternoon was the first time that Monti saw the portrait of his son, lovingly rendered by Gina Johnson, an artist from Woburn. "She got the hair wrong," Monti said, searching for words. "But everything else is fine."

The 115 sketches displayed in the State House through June 19 depict the faces of the Massachusetts men and women killed in service since 2001. The project, titled "Operation Home Ties: Faces of Remembrance," is Johnson's gift to those who have lost a loved one to the wars in Iraq and Afghanistan.

The unveiling of the exhibit yesterday was attended by Governor Deval Patrick and Lieutenant Governor Timothy P. Murray. "Words can become abstractions," Patrick said, speaking of the honor, loyalty, and patriotism of the men and women in Johnson's portraits. "As you look around this hall, those words become more visible." He called the exhibit "marvelous, humbling, and sober."

When Johnson stood to speak, she received a standing ovation. "We know that military families understand," said Mark McGuire of Mashpee, whose son, Private First Class Daniel McGuire, was killed in Iraq in August 2008. "It means a lot that she can, too."

Johnson, a mother of two who works as property administrator at an Arlington apartment complex and teaches art to neighborhood children in her spare time, began the project when the fiancé of a former art student was killed in Iraq.

The portraits quickly grew in number, and by January, with the help of her brother, Paul Roth, 44 of her portraits were put on display in Burlington. State Senator Kenneth Donnelly attended the exhibit, and he promised to bring it to the State House. "He held true on his promise," Johnson said.

Some of the photographs Johnson used to draw the portraits were chosen by the soldiers' families; others she found online or in newspapers. In each case, she sketched the portrait with a No. 2 pencil. She always starts with the eyes, she said, "the mirror to the soul."

"I am so moved by just how human they are," said Diane Nealon, executive director of the Massachusetts Military Fund, who attended the ceremony.

"It's a beautiful picture," said Santina Raymond of Lawrence, whose son, Sergeant Pierre Raymond, died in Iraq in September 2005.

Each family was given a portrait. "We hadn't seen this before," said Kevin Jones of Westminster. "It was very touching." His son, First Lieutenant Ryan Patrick Jones, died in Iraq in May 2007. Kevin Jones said he and his wife have started a foundation in their son's name and have already given away more than $40,000 in scholarships and donations.

"He's done more good than he could ever realize while he was here," said Jones, looking down at the portrait held gently in his hands.

Vivian Nereim can be reached at vnereim@globe.com.