A mother's journey from hope to horror 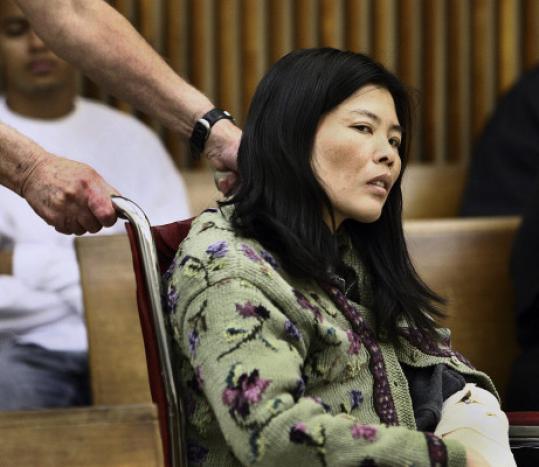 QUINCY - An interpreter crouched next to Chi Xue-fang's wheelchair, quietly translating the courtroom proceedings to the immigrant mother. Her ankles were shackled, her legs too weak to walk. As legal terms such as "mental competency" and "murder charge" were decoded into Mandarin, the slender Chinese woman looked ahead with a blank stare.

She had high hopes when she joined her husband in this country two years ago, but then her life collapsed. At the court hearing last month, she sat accused of killing one of her two daughters, along with her 7-month-old fetus, and nearly herself in a bloody rampage that was as horrific as it was perplexing.

In the four months before that fateful day, some doctors and therapists had detected that she was psychologically fragile. But the 38-year-old Chi kept a distance from these clinicians.

Only to relatives did she confide her anguish over her husband, whom she alleged badgered her with physical and financial threats, while making clear his love for another woman who lived nearby. Perhaps worse for Chi, this girlfriend had borne him his first son - giving her a special sta tus in traditional Chinese culture.

By mid-April, Chi resorted to behavior not uncommon among rural Chinese women faced with family disgrace: She sought to end her life. And she apparently wanted to take her children with her.

"So often, people think they can handle their problems on their own," said Catherine Vuky of South Cove Community Health Center, where Chi received much of her prenatal care. "They don't know the violence they're capable of."

In some ways, Chi had an auspicious place to begin her life in America. In the North Quincy neighborhood where she and her husband rented an apartment, bilingual Chinese-English signs hang from many of the storefronts.

Though Chi spoke little English, she found part-time work at a restaurant. Her husband, Xue Zhuo-xing, largely supported the family working as a Chinese cook. He had arrived first in 2000, then later arranged for his wife and the two girls to leave Fujian Province for the United States.

Months after coming here in 2007, relatives and neighbors said, Chi learned that her husband had a Chinese girlfriend he had met while living alone in the United States. And in the past year, this woman bore him a son.

"In our culture, a woman wants a very happy family," said Chi's uncle, Lin Guang-Hua, who lives in New York. "Unfortunately, she had an unfaithful husband."

Chi kept much of her pain to herself. Yet two neighbors, who asked to remain anonymous for fear of being drawn into the criminal case, said they often overheard Chi arguing with her husband and sobbing.

Chi's husband, Xue, declined to be interviewed when reached by telephone last week.

Chi's life became even more complicated last fall, when she learned she was pregnant and, shortly thereafter, quit her job. By winter, it was clear that Chi was spiraling into deep distress. On Feb. 1, during a prenatal visit at Tufts Medical Center, she told staff that her husband had once assaulted her, Quincy police said.

Chi promised to file a domestic violence report, but police said she never did.

The state's child-protection agency, the Department of Children and Families, subsequently contacted Chi's home, police records show, though the extent of the agency's involvement with the family is unclear.

Three weeks later, trouble mounted. An ambulance was summoned to the home, where Xue said his wife had ingested dishwasher detergent, police said. Police could not determine whether this was a suicide attempt or a plea for attention.

Chi was later admitted to the psychiatric ward at Beth Israel Deaconess Medical Center, where she stayed for a few days, according to someone who is familiar with Chi's medical case but is not authorized to speak publicly about it.

When Chi was released, she promised to seek outpatient mental health services at South Cove, where the overwhelming majority of staff and patients are of Asian background. However, Chi canceled many of her therapy appointments, said the individual with knowledge of her medical case.

The couple began to talk of divorce. Chi's relatives said, however, that the husband set harsh terms for Chi to keep the girls, ages 9 and 14. He told her she would have to pay him $80,000 for each daughter; otherwise, he would take them. Chi was frightened because she was ignorant of the US child custody system, the relatives said.

On April 16, upon returning from work around 10 p.m., Xue saw blood throughout one of the bedrooms and frantically called 911. Police found Chi lying on the bed, unconscious, with deep gashes to her left wrist and puncture wounds to her abdomen. Next to her was her 9-year-old daughter, Xue Wen, a third-grader at Wollaston School in Quincy, unresponsive.

Later when questioned by police, records show, the older daughter said her mother had earlier that day tried to strangle her but she had gotten away.

When asked by police why her mother would want to kill them, the 14-year-old said her mother didn't want her girls to live with "their father's girlfriend."

In the days that followed, the home was staked out by the media, including the Chinese-language press, which was generally sympathetic to Chi.

"A lot of new immigrants have been in similar situations - they have no friends, they are helpless," said Carrie Tang, a reporter in the Boston bureau of the World Journal, a national Chinese-language newspaper.

For Linda Chin, president of the Boston-based Asian Task Force Against Domestic Violence, Chi's plight is also a case of missed opportunities for intervention.

"We come up against thousands of years of ingrained values in which the man rules, marriage is sacred, divorce is shameful, and boys are valued," Chin said.

Relatives have portrayed Chi as a woman who lost her mind from family stress, though it remains unclear whether she was mentally ill prior to immigrating to the United States.

Some lawmakers have raised questions about whether the state acted aggressively enough to protect the children. The Children and Families agency has declined to say how actively it was monitoring Chi's situation and whether it was aware of her missed mental health appointments.

Officials issued only this statement: "With the presence of a second caretaker, and an understanding that the mother would seek and receive proper medical care, removal of the children from the home was unwarranted."

On May 19, Chi appeared in public for the first time since she was charged.

Sitting in her wheelchair in a Quincy courtroom, Chi was motionless. A large beige elastic bandage covered her left arm, where she had cut herself almost to the bone. The district attorney's office said after the hearing that the fetus she had been carrying was a boy.

Neither prosecutor Thomas Finigan nor defense attorney Randolph Gioia disclosed Chi's diagnosis in court, though Gioia later said it was related to severe depression with "some psychotic dimensions."

As the judge set the date for her next hearing, Chi looked on in silence.