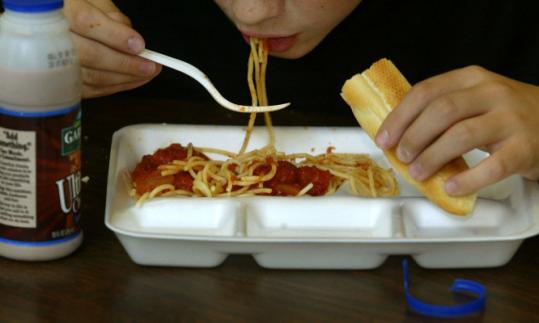 This story was reported and written by Globe correspondents Sara Brown, Husna Haq, and Hannah McBride.

But, in many ways, that was the good news.

Those cafeterias were inspected, their problems identified for correction. Cafeterias in 7 percent of private and public elementary and secondary schools across Massachusetts were never inspected at all in the 2007-2008 school year, according to state records. And 38 percent were inspected just once, though federal law requires two health inspections annually.

The Massachusetts data gathered from school districts tell only part of the story. A closer look at more than 1,000 schools in 157 communities in Greater Boston reveals a slipshod system of local enforcement with virtually no state or federal oversight.

The Globe review found that some cities and towns do little to ensure cafeteria safety. One community - Hudson - admitted that no inspections of its schools were done last year. But more said they couldn't even document whether their 2008 inspections were completed.

Faulty record-keeping is a widespread problem. Some communities keep inspection records, others don't. Some officials make inspection results available to the public, as required by law, while others make it difficult or impossible to learn whether inspections were carried out. Federal and state agencies, meanwhile, do nothing to enforce laws mandating regular inspections.

"Parents should be alarmed," said Colman Herman of Dorchester, a food safety advocate. "They expect their kids to be kept out of harm's way, and we have boards of health not doing their job."

In Massachusetts, school cafeteria inspections fall under the jurisdiction of local boards of health, typically small groups that are either elected or appointed, depending on the community. There are no minimum education or experience requirements to be a health inspector; candidates need only pass a state-approved performance test and a written exam, which can be taken online through the Food and Drug Administration. The state also sets no minimum qualifications for directors of local boards of health.

"The guy who inspects your car has more training" than some health inspectors, said Michael Moore, food safety coordinator at the Massachusetts Department of Public Health.

The systemic shortcomings in cafeteria inspections come as a recent wave of health scares, from salmonella-contaminated peanut butter to E. coli-tainted spinach, has revealed serious gaps in the nation's food safety system.

Children are especially susceptible to food-borne illness, and in cafeterias or any other food-serving establishment, the primary line of defense is health inspections. The Washington-based Center for Science in the Public Interest estimates that 76 million Americans contract food-borne illnesses each year. No records are kept on the number of illnesses traced to the 29 million meals served daily in US school cafeterias.

In 2004, Congress passed a law requiring twice-yearly inspections of school cafeterias participating in the federal school lunch program. However, the law does not mandate penalties for communities that fail to comply, passing that responsibility to states.

Massachusetts law, under which cafeterias and restaurants are held to the same standard of cleanliness, puts responsibility for penalties in the hands of local boards of health. That creates the unlikely scenario of one branch of local government, the health department, fining another branch, the school department. The state does not keep records of such fines, and local officials interviewed said they could not recall any.

"Even if things are inspected, no one's auditing. The federal government - nobody's looking," said Sarah Klein, a staff attorney with the Center for Science in the Public Interest.

Even when school cafeterias are regularly and effectively inspected, it can be difficult or impossible for a parent, or anyone else, to learn whether sanitation hazards were found.

The Child Nutrition and WIC Reauthorization Act, the same 2004 law that requires twice-yearly inspections, mandates that schools post the most recent inspection reports in a visible location and release a copy to the public upon request. But when the Globe requested cafeteria inspection reports, some local boards of health responded by stonewalling or barely responded at all.

For instance, Globe correspondents made dozens of calls and sent two public record requests to the Lawrence Board of Health over the course of two months before being directed to the city attorney, Charles Boddy. Messages for Boddy went unreturned. When correspondents arrived at the Lawrence Inspectional Services Department in pursuit of records, they were directed to Commissioner Myles Burke, who was unavailable and subsequently failed to return several messages.

Lou Tartaglia, director of the Brockton Board of Health, initially told a reporter that he would charge $199 for copies of the inspections for the city's 20 schools. Eventually, he relented and the copies ended up costing $50. Once obtained, the reports showed that three schools in Brockton had numerous violations that went uncorrected for more than 2 1/2 years.

Tartaglia said most of the repeat problems were facilities-related violations. For instance, he said West Junior High, which had repeat peeling-paint violations, whitewashed its ceiling to correct the problem, but it began peeling again. Tartaglia added that schools often don't have the money to make repairs that inspectors say are needed before the next inspection.

Then there are cases such as Mansfield and Winthrop, where officials said they conducted school cafeteria inspections last year but did not fill out inspection forms. In Stoneham, an official said the 2008 reports could not be found after a recent move. Officials in Carlisle, Cohasset, and East Bridgewater responded with an excuse familiar to any teacher trying to collect homework assignments: They said they lost their 2008 records. In Saugus, also, no records for 2008 were available.

In Boston, 91 of the 132 schools where food is served were inspected twice during 2008 and 16 were inspected only once. Boston is one of the rare cities that uses "pass" or "fail" for cafeteria inspections, and of the cafeterias inspected, 82 failed an initial inspection. Thirteen failed their follow-up inspections as well. The failures resulted from violations ranging from rodent activity to a broken refrigerator.

Diane Chalifoux, principal health inspector for Boston's Inspectional Services, said she was doubtful that schools went uninspected or were only inspected once. She said reports might have gone missing during a switch from paper to computer-based reports. Chalifoux also said the failure rate can be misleading. A failing grade can cover a range of problems, from a low-risk issue that could get worse to a severe violation needing immediate attention.

When conducting inspections, health officials use forms with a 30-item checklist, including 22 "red items" in which a violation could create the risk of a food-borne illness. Klein, of the national food safety advocacy group, said the primary risks in school cafeterias are poor temperature regulation and careless sanitation that may contaminate food by contact with raw meat.

As a result, inspection standards run the gamut from cursory to thorough.

By contrast, 16 of the 20 inspection reports from 2008 provided by Weymouth reported no violations and simply said "satisfactory." Four schools had no record of inspections in 2008. Weymouth inspector David Kaplan defended his practices, saying, "Most of the time if there's nothing wrong, there's nothing to report."

Another Weymouth inspector, Mary Williamson, said she twice inspected the four schools with the missing reports but did not have the paperwork. "No violations for any of them," she said.

When inspections are properly carried out, examples of potential risks are not hard to find.

In August, Lynn health inspector Frank McNulty was called to Lynn English High School to investigate a foul odor. When he opened the cafeteria freezer, a puff of steam reeking of rotting meat gushed out. "I nearly passed out," McNulty said. "I've never dealt with something like that before."

The freezer had shut down, but the condenser was still operating, drawing in hot summer air and cooking hundreds of pounds of meat for weeks. McNulty and food service employees called dozens of cleaning services, but none would take the job. Finally, he contacted a company that cleans up crime scenes.

"They must do dead bodies," he said, "so I figured they'd do this."

Sara Brown, Husna Haq, and Hannah McBride are journalism students at Boston University. They reported this story under the supervision of professors Mitchell Zuckoff and Dick Lehr, formerly of the Globe staff.