New to the US, he blazed a path 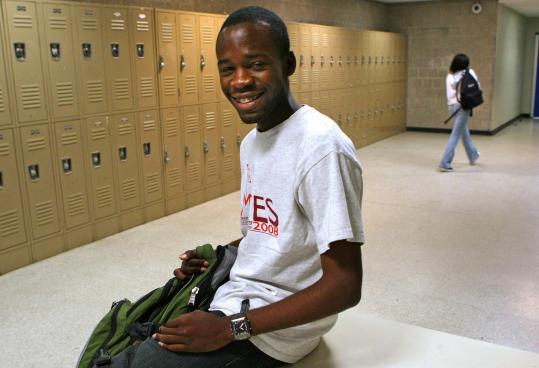 He arrived in Boston barely able to speak or write in English, but Edner Paul did not allow that to stand in his way.

In his four short years in the United States, this 16-year-old whiz kid from Haiti accomplished one feat after another. He mastered the English language within months and soon after passed a rigorous admission exam to the John D. O'Bryant School of Mathematics and Science. On Friday, he will graduate as valedictorian with a full scholarship to the Massachusetts Institute of Technology.

His success is as much a story about new immigrants as it is a tale about the re-emergence of the O'Bryant. Paul's admission to MIT follows that of two O'Bryant graduates last year. They are the first crop of students from that school to attend MIT in recent memory, said MIT and Boston school officials.

"It would be fun if O'Bryant became the MIT of the Boston schools," said Ed Moriarty, an instructor at MIT's Edgerton Center who has worked with the O'Bryant since 2003.

"Edner will become part of the inspiration," he said, "for other O'Bryant students to pursue MIT."

Paul said he did not even know MIT existed when he arrived here four years ago.

"In ninth grade, I only heard about Harvard because we took a field trip there," said Paul, who spent his freshman year at Madison Park High School, where a little more than half the students earn diplomas within four years.

While growing up in St. Marc, a port city in Haiti, Paul decided as a fourth-grader to devote himself to school. At that time, he didn't crack the top 20 percent of his class. It bothered him when teachers rewarded the top students with prizes, feeling he was letting his mother down. She never graduated from high school and wanted better for her children. So Paul hit the books.

He hasn't stopped studying since.

When Paul arrived here in March 2005 as an eighth-grader, Boston school officials didn't know what to expect. They placed him in a special program that teaches new immigrants how to speak English. In his spare time, he would listen to cassette tapes on pronunciations.

A teacher at Madison Park High discovered his gift for math and science in the fall of ninth grade. He had been placed in an algebra class but could handle precalculus. Paul soon began studying for the O'Bryant admission exam.

Entering O'Bryant at the start of his 10th-grade year marked a major turning point for Paul's education. He arrived as the school was ramping up the academic rigor, including the cementing of stronger relationships with MIT and other institutions such as the Wentworth Institute of Technology and the Longwood Medical and Academic Area.

At the school, which is located on Malcolm X Boulevard in Roxbury near Madison Park High, Paul has impressed teachers, not just in math and science, but in English, too.

"He's kind of like a renaissance man," said Crystal Coy-Gonfa, his English teacher, who taught Paul this year in her Advanced Placement literature and composition course and was surprised to find out he was also a poet. "Someone pointed him out as a brilliant scientist, but I didn't know he had this other side to him.

"He definitely has a flair for figurative language and the presentation of the spoken word," she added. "He has sort of a romantic style."

When Paul needs a break from school work, he recharges his batteries writing poetry. (He also plays soccer.)

"Most of them are love poems," Paul explained to a visitor at his Hyde Park home last week while showing a poem titled "My Angel."

"People think it's about a lady," he said. "It's really about nature."

Paul's creative side fits nicely with the revamping of O'Bryant's math and science programs, which emphasizes learning by doing projects and solving problems, school staff said. For instance, in an Advanced Placement physics class this year, Paul converted a computer document scanner into a camera.

Outside the O'Bryant, Paul took advantage of other educational programs, such as spending a summer two years ago at Georgetown University and last summer at MIT. He also participated in a special program at the Broad Institute of MIT and Harvard.

"He's hard-working, very conscientious," said Steve Fernandez, his AP physics teacher and an MIT graduate. "He's concerned about understanding the material - not just getting the right answer, but understanding how to do it."

MIT was Paul's first choice. His scholarship is valued at $50,000 a year. Paul, who applied and was accepted to three other colleges, tapped a competitive national nonprofit program, QuestBridge, which helps bright low-income students get into top-tier colleges.

Paul credits some of his success to O'Bryant, hard work, and his mother. "I can't give up," Paul said. "I just have to keep working hard."

His mother, taking a break from housework one morning last week, smiled proudly when asked about her son's journey to MIT. She then spoke in Creole to Paul, who then translated for her. "It's a pleasure for her because not everyone gets an opportunity to go," Paul said.

Joel Stembridge, O'Bryant headmaster, predicts more students will get into MIT in the coming years, especially as they advance through the school's new engineering program. He hopes it will help attract younger students in the district to O'Bryant.

"If you ask most students now, they probably didn't select the O'Bryant as their first choice or they didn't come here for the math and science programs," Stembridge said. "The goal is that students will eventually choose us first because they are interested in math and science. We are not there yet but getting there."

For now many are savoring the victory of students like Paul. "It's good when we have a success story like Edner's," Fernandez said. "It shows we are doing something right."