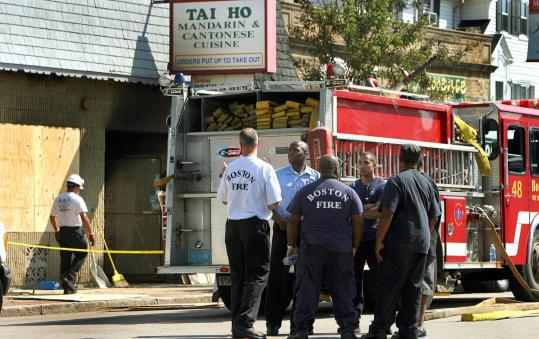 Firefighters talked among themselves at the scene of a fatal fire on Centre Street, in which two Boston firefighters were killed. (John Tlumacki/Globe Staff/File 2008)
By Donovan Slack Globe Staff / June 6, 2009
Text size – +

The families of two Boston firefighters killed in a West Roxbury restaurant fire and a third firefighter injured in the blaze will split $2.2 million to settle lawsuits they brought against the restaurant, its landlord, and a grease-cleaning company, according to a source involved in the agreement.

Firefighter Warren J. Payne died instantly, and his colleague, Paul J. Cahill, died from smoke inhalation in the August 2007 fire, which was fueled by grease buildup that had seeped from a kitchen exhaust pipe into the ceiling of the Tai Ho Restaurant on Centre Street. Firefighter Kenneth Gibson was injured.

"The West Roxbury fatal fire was a tragic event for the city of Boston and the Boston Fire Department," said Anthony Antonellis, a lawyer representing the restaurant's landlord, Continental Realty. "We are pleased the litigation is ending."

Antonellis declined to provide details of the settlement, but said his client was not guilty of any wrongdoing in the blaze.

According to court documents, Gibson and the families of Cahill and Payne filed wrongful death suits beginning last year against Continental Realty, the Tai Ho Corp., and J & B Cleaning, saying that all of them "knew or should have known that dangerous and defective conditions existed at 1727 Centre Street created by the carelessness, negligence, and/or gross negligence of the defendants."

A Fire Department investigation found explosive conditions in the restaurant's kitchen, with grease built up to dangerous levels. Restaurant employees had placed a container on the stove to catch drippings from the exhaust hood overhead.

State fire codes mandate that restaurants have their exhaust ducts cleaned quarterly and cleared of grease buildup. Tai Ho had hired J & B Cleaning just months before the fire, but a cleaning receipt indicated the company cleaned the stove and the hood, but did not clean the duct.

Both the city of Boston and the state have since enacted tough regulations for commercial kitchen grease cleaners.

In Boston, cleaners now must pass a certification test and register with the Fire Department before they are cleared to work in city restaurants.

The state Board of Fire Prevention Regulations gave final approval this week to a measure that would require commercial kitchen grease cleaners across the state to pass tests administered by the state fire marshal before they are allowed to clean restaurant kitchens.

In the past, the fire code specified only that the cleaning be done by a "properly trained, qualified, and certified company or person." Many local fire officials never checked cleaners' certifications.

Fire Marshal Stephen D. Coan said yesterday that the new testing will begin in September and that the regulation will go into effect Jan. 1.

"Moving forward, this regulation should provide for a high standard for individuals involved in cleaning hood systems and hopefully reduce fires and prevent a tragedy similar to the one that took the lives of firefighters in Boston," Coan said.

Lawyers for the other parties in the settlement agreement did not return a call seeking comment or declined to comment yesterday.

The person involved in the talks and another one briefed on them said autopsy reports for the firefighters became an issue during negotiations. The sources, who spoke on condition of anonymity because they said all parties to the suit had signed a confidentiality agreement, said one reason the firefighters' families settled rather than take their cases to court was that the reports would have been released to the public during trial.

The reports show that when they died, Payne had traces of cocaine in his blood, and Cahill's blood alcohol level was .27, three times the legal limit to drive in Massachusetts, according to two government officials who described the results to the Globe. In addition, Cahill also had traces of marijuana in his blood, according to another high-ranking official briefed on the reports.

Since shortly after the toxicology tests were completed, the Boston Fire Department has been trying to impose mandatory drug and alcohol testing on firefighters, but has been stymied by the firefighters union, which has refused to allow testing without significant pay raises or benefits in return. That dispute remains in arbitration.