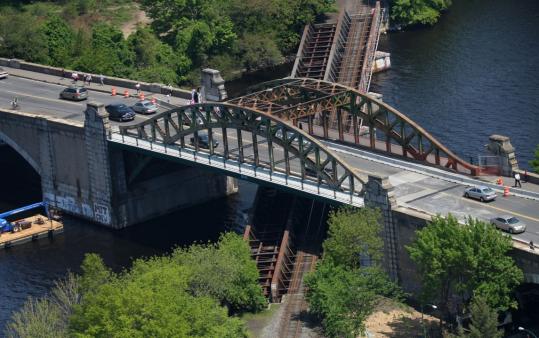 The Boston University Bridge's weight limits had not been recalculated since 1979. (David L. Ryan/Globe Staff)
By Stephanie Ebbert Globe Staff / May 30, 2009
Text size – +

The deterioration of the Boston University Bridge, which had a lane closed two weeks ago for emergency repairs, was not a secret. Inspectors who had labeled the bridge structurally deficient in 2001 had been watching curbs crumble and sidewalks gape with holes that offered pedestrians an unwelcome view of the Charles River below.

But efforts to renovate the span - even when it became one of the Patrick administration's top construction priorities - were delayed because of disagreements between two state agencies that oversee highways in Massachusetts.

The Department of Conservation and Recreation, which oversees the bridge, wanted to proceed immediately, while the state Highway Department, which may soon take it over, wanted to see whether repairs could be safely postponed. After a two-month delay, the contract was finally put out to bid in late April, weeks before inspectors determined that the deterioration was so great that it was no longer clear that the bridge could handle the weight it was rated for. In fact, no one had rated the bridge's capacity for three decades.

The delays in repairing the long-neglected BU Bridge illustrate how construction problems and bureaucratic disputes can continue to stall bridge repairs even now, at a time when the state has focused unprecedented attention and money on bridge repairs, which enjoy uncommon public support since the 2007 collapse of a Minnesota highway bridge.

"Let's get started," said state Representative Martha M. Walz, a Back Bay Democrat, who wants the state to adhere to an extensive study it conducted, dictating a schedule for fixing the Charles River bridges. "If the conditions are deteriorating so rapidly that the order of the construction projects needs to change, then let's talk about that. But if there's no new information, we've got a schedule, the money's available, we should move forward."

The handling of the BU Bridge also exposed differences between the Massachusetts Highway Department and the Department of Conservation and Recreation, an agency that oversees state beaches, parks, and swimming pools and that critics charge is ill suited to managing parkways and bridges.

While DCR officials were pressing for an immediate overhaul of the bridge, state Transportation Secretary James A. Aloisi Jr., who oversees MassHighway, was delaying issuance of the bids, said two sources close to the issue. Aloisi's spokesman, Colin Durrant, declined requests for an interview with Aloisi. He said Aloisi requested more information because he had questions about the timing of the bridge projects and the urgency of the BU Bridge rehabilitation. But he noted he also called for a new load rating as a safety precaution.

Added DCR Commissioner Richard K. Sullivan Jr.: "He had just come on board and was getting a handle on the whole project and BU in particular. It wasn't an unreasonable request."

In February - the same month the BU Bridge renovation was supposed to be advertised to contractors - both DCR and MassHighway sent inspectors to the bridge to gauge the urgency of the rehabilitation.

In a document obtained by the Globe, DCR's consultants, Simpson Gumpertz & Heger, said the renovations should start immediately. "We believe this is urgently needed to address the bridge's structural deficiencies and to maintain public safety." If the project were to be delayed, they wrote, DCR should prevent trucks from traveling in the right-hand lane where damage was most severe - the lane that was closed after a subsequent inspection in May.

Conversely, MassHighway said the work could be postponed - as long as inspectors checked the bridge's load rating, which might need to restrict heavy trucks. The bridge's weight limits hadn't been recalculated since 1979.

MassHighway recalculates load ratings of its own bridges every 10 years or when there are changes in conditions, said Durrant. But the Department of Conservation and Recreation does not follow that guideline. Over the past decade, the agency has recalculated load ratings on just 17 of the 136 bridges it oversees, DCR officials said. The agency has begun the process of rating 12 more.

DCR officials said the load rating is less crucial to safety than regular inspections, which can spot deterioration and trigger immediate repairs. Typically, a load rating is done when a bridge's condition worsens or it's found to be structurally deficient - as the BU Bridge was in 2001, said Nancy Singer, a spokeswoman for the Federal Highway Administration. But that rating was largely due to surface issues - such as the condition of its deck, curbs, and sidewalks - rather than load-bearing parts, DCR officials said. A new load rating would not always be warranted under those conditions, but would be left to the discretion of the inspectors, specialists said.

Sullivan said his agency had no money for load ratings, despite requests to the Legislature and the governor dating to 1993. A load rating for the BU Bridge could cost more than $60,000, Sullivan said.

"There was never any money put forward until 2005, but by that time the BU Bridge was already under design for full rehabilitation and was already getting yearly and much more frequent inspection both from our own engineers and outside engineers," said Sullivan.

Sullivan said inspections were conducted every three months since 2007. But past inspection reports show that inspectors did not raise particular alarms or question the load rating of the bridge. "I'm always going to err on the side of public safety. Once an inspection is going to tell me otherwise, then everything is going to get closed and that's what happened," said Sullivan.

On May 15, just before BU's graduation weekend, the bridge was closed for repairs in the far right lane that carries traffic from Boston to Cambridge over the Charles River. Officials also closed the adjacent sidewalk, which was supposed to have been repaired last year. Instead, it took a year of construction to repair the sidewalk on one side of the bridge.

Noah Bierman of the Globe staff contributed to this report. Stephanie Ebbert can be reached at ebbert@globe.com.