Neighbor complains, but others rally behind ice cream man 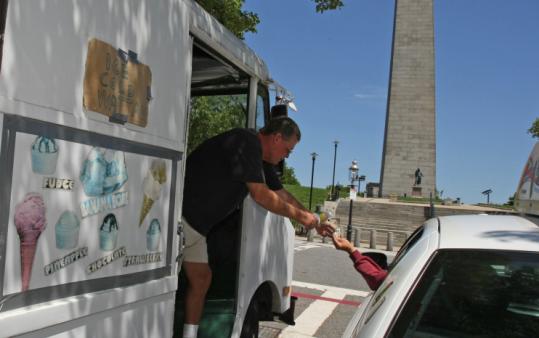 CHARLESTOWN - Mitch Peters does more than sling ice cream from his old truck parked near the Bunker Hill Monument.

Between dishing out strawberry shortcakes for two bucks and the bottled "ice cold watta" for a buck-fifty, the fast-talking, friendly Peters maintains a dialogue with the neighbors, stops traffic for children in a crosswalk, and dispenses directions and one-liners in equal measure.

"What's the most dangerous creature on earth?" he asked a couple of tourists from England one recent day. "A man with a map in his hand."

He's been selling ice cream from a truck for 20 years, he said, and for the past several years he's spent his spring and summers parked on Monument Square, right at the Massachusetts Gate at the base of the steps leading to the Bunker Hill Monument. He's parked in that spot seven days a week, from 10 a.m. until 5 p.m., sometimes later.

But recently, Peters said, he was informed by National Park Service rangers that he could no longer park on the road that encompasses the park.

The federal agency said it was responding to a complaint from a neighbor who said that allowing the ice cream truck to park between two crosswalks in a high-traffic area posed a potential safety issue.

"We started to look into it, and what we found was that indeed where the truck is parked, it does pose a potential safety hazard, in that you have to walk out from beside or behind an ice cream truck," said Sean Hennessy, public affairs director for the National Park Service, who said the neighbor had other complaints, including allegations that Peters parks his own car, which is registered in Florida, in a resident parking space. Peters acknowledged using the car to save a spot for the truck at night.

At this point, Hennessy said, the service is still trying to determine how great a hazard it is and the best course of action. It is also fielding calls from neighbors championing Peters's cause.

"We received several calls and e-mails in support of him," acknowledged Hennessy.

Both Peters and Hennessy say they're working on a resolution. Peters acknowledged that there were some other issues he needed to take care of - paying parking tickets and getting his proper city and state permits, for instance - which have largely been done. (According to a Registry of Motor Vehicles spokesperson, his Massachusetts license expired in 1990. He has a drivers license from Florida, where he spends part of the year.)

"As long as he has the proper permits and is not playing music, I have no problem with the ice cream truck," LaMattina said, in reference to a city noise ordinance passed last year that prohibited the playing of jingles while an ice cream truck was stopped.

For now, Peters is conducting his business from the side street location at the top of Monument Avenue.

"We'll have another meeting," Hennessy said. "There has to be a compromise solution that will keep the neighbors happy and provide for a safe visiting experience at Bunker Hill."

The 53-year-old Peters is a Charlestown guy who can point to his former high school (now condominiums) on one side of the monument and pick out an area of grass where he and his buddies once played pickup football. Neighbors say he and his ice cream truck have become an important part of their community.

"I feel like he's the greatest ice cream man ever," said Kristin Johnson, one of the neighbors supporting him. "He's a real fixture in the neighborhood. He crosses the kids across the street and he's always giving directions. In a way, he really augments the Park Service's mission, which is to share the experience of Charlestown."

Among his other fans are local children - and regular customers - Mather Hoyt and Hannah O'Brien, both 12, and Sophie Von Hunnius, 13.

"He's always been there," O'Brien said. "I don't know why he has to move all of a sudden."