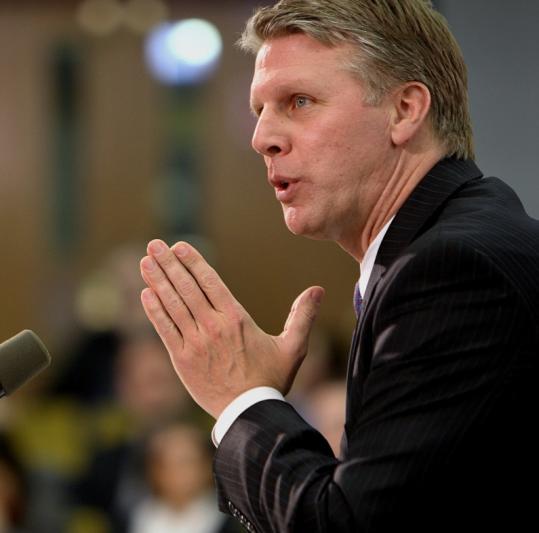 He is a close political ally and prodigious fund-raiser for state Treasurer Timothy P. Cahill. When a blue-chip New York financial firm was trying to persuade Cahill and his staff to award it a lucrative contract to manage state pension money, it hired Anthony S. Rust to push their cause.

In the end, the payday was a big one for everyone involved. Ivy Asset Management was awarded the contract in 2004 to manage $393 million in state pension funds, a deal that would net it about $18.3 million in fees, according to state records. Ivy paid Rust an estimated $2.3 million for brokering the deal, according to the records.

Rust's introduction to Ivy came through Cahill's closest political associate and close friend, Thomas F. Kelly, whose firm, CanAm Consultants, specializes in acting as a placement agent for financial firms seeking to manage public pension funds, according to a person briefed on the arrangement.

State campaign disclosures show that Cahill collected tens of thousands of dollars in campaign contributions from Rust and his family members, from Ivy executives, and from executives at Ivy's corporate parent, the - more than $41,000 in all.

There was nothing illegal about the financial arrangements between Cahill's office, Rust, and Ivy, but their actions echo controversies that are raging in state capitals across the nation.

Federal regulators and state investigators from New York to New Mexico are probing the way major public pension funds hand out contracts to manage billions of dollars in taxpayer money. What they're finding is that major money management firms often pay seven-figure fees to politically connected middlemen to help them in their bids, while at the same time showering public officials with campaign contributions.

In Massachusetts, Cahill chairs the Pension Reserves Investment Management Board in his capacity as state treasurer, overseeing the $37 billion public pension fund.

The fund is managed by private financial firms, who compete ferociously for the lucrative contracts that typically carry significant fees. As part of that competition, the firms often hire brokers, or middlemen, to help their cause.

Cahill declined to be interviewed last week about Rust or any other pension contracts. But in a written statement, he said PRIM's selection process involves "a multi-tier review" conducted by the agency and is "one of the most rigorous and comprehensive in the industry."

"To infer that anyone has received special treatment is patently false," Cahill wrote in the statement. He said that Massachusetts "serves as a model around the world" and noted that the 169 managers who have been chosen through competitive bids have helped produce $12 billion in growth for the fund over six years.

Cahill's chief deputy, Grace Lee, said Cahill, notwithstanding his ties to Rust, did not recuse himself from the selection of Ivy, which invests about $7 billion in assets, and other firms associated with his political fund-raising because he typically is not made aware of what middlemen are involved in broker placements of state pension funds. Cahill acts on recommendations of finalists made by his staff, she said.

"He is presented a synthesized version which only contains information about the firm," not the middlemen who helped arrange the awards, Lee said.

Michael Travaglini, PRIM's executive director, strongly defended the integrity of the selection process for money managers. He said Cahill was only one of a number people involved in the decision to choose Ivy Asset Management. He said the selection is primarily "staff driven" and includes detailed and objective competitive bidding.

"I can speak to the integrity of our process," Travaglini said. "But why a firm would pay a third party? There are many times where we don't understand why, particularly in a process like ours, which is open and competitive."

He said, however, the use of middlemen is a legitimate practice.

Rust is a close political associate of Cahill and key member of the treasurer's campaign fund-raising team. A Rhode Island resident, he and his family members have given Cahill $11,000 in campaign contributions over the years. Rust did not return repeated telephone calls placed to his cellphone; the number listed for his company, Newport Capital, has been disconnected.

Rust, according to state pension officials, has been active for well over a decade in public pension circles, representing financial firms seeking business from the state and city of Boston pension fund managers.

Rust was one of a half dozen people who met as often as every week in the Quincy office of the treasurer's brother-in-law, Anthony Falco, to map out political fund-raising plans, according to two people who were involved in Cahill's fund-raising operations. Cahill has been a prodigiously successful fund-raiser, building a $3 million political war chest. He has told associates he is ready to challenge fellow Democrat, Governor Deval Patrick, next year.

Rust profited as the placement agent when the PRIM board decided in June 2004 to hire Ivy Asset Management to invest the funds. The agreement between Rust's firm, Newport Capital, and Ivy required Ivy to pay him 12.5 percent of all fees that Ivy charged the pension fund for its management services and performance. State pension records show that Ivy made $18.3 million in fees between 2004 and February 2009, when the PRIM board fired the firm, citing changes to its executive team.

The contract with Ivy came during a particularly interesting juncture for the state pension system, as Cahill was among the first public pension overseers in the country to branch out into higher-risk investments like hedge funds and private equity companies in an attempt to increase returns. These money managers, in turn, fought hard for the Massachusetts business, which would then give them credibility to win business from funds in other states.

Rust's company appeared on a disclosure list of third party marketers that the Massachusetts PRIM board released to the Globe at the newspaper's request. Those marketers make multimillion-dollar fees by pitching investments to pension funds on behalf of private money managers - often hedge and private equity funds.

Cahill played an active role in the selection of Ivy as a member of the treasury selection committee, which is typical for Cahill but a departure from past practices. Previous state treasurers did not involve themselves in the selection process.

Cahill pushed for the change in state investment policy that allowed the PRIM fund to invest $2 billion in pension proceeds in hedge funds. Cahill then sat on the nine-member selection committee that chose the money managers.

Included on that list is Kelly's firm CanAm Consultants. The documents provided to the Globe show CanAm Consultants has twice represented a client bidding on treasury business since Cahill took office in 2003. The clients were not awarded any work.

The list also includes Marwood Group, a firm run by Edward M. Kennedy Jr., the son of US Senator Edward M. Kennedy. Marwood Group served as a third party marketer for a $325 million allocation that PRIM assigned to Arden Asset Management to invest in hedge funds in April 2004. Arden did not return calls seeking comment. But if industry standards were followed, Marwood would have made over $3 million from $22.6 million in fees that Arden charged PRIM.

Kennedy, who has been, politically, a low-key member of his famous family, declined to comment on his work on behalf of Arden. Although he only contributed $250 to Cahill's campaign coffers, Kennedy has attended numerous Cahill fund-raisers and a hosted Cahill and other pension finance experts at a clambake at the Kennedy compound shortly after the decision was made to invest with Arden in 2004, according to people who were there.

The value of Massachusetts pension money managed by Arden grew from $325 million to $556 million by 2007, according to state records. That included an allocation of another $81.7 million in 2005 and 2006.

In October 2005, the PRIM board chose EARNEST Partners, an Atlanta-based financial firm, to manage $250 million in pension money. EARNEST used Connors & Co. as a middleman on the deal. Paul F. Connors Jr. and his wife have contributed $12,000 to Cahill's campaign committee. Connors's director of marketing, Josephine Shea, a Quincy resident, is one of Cahill's chief fund-raisers and, along with Rust, attended the fund-raising strategy meetings at Falco's office. She has given $3,000 to the treasurer's political account.

The firm also employs Robert Q. Crane Jr., the son of the former state treasurer, and a Harvard classmate of Connors. Shea declined to comment. Connors did not return a call made to his office.

The mix of politics, campaign fund-raising, and public pension fund investments has raised serious questions - and in some cases, criminal allegations - in other states, particularly in New York. The attorney general there, Andrew Cuomo, has brought charges against political insiders in Albany he says were carrying out a "pay-to-play" scheme involving pension investments.

Earlier this month, Cuomo pulled together prosecutors from 36 states, including Massachusetts, to participate in a telephone conference to discuss the issue.

As a result of the New York scandal, placement agents are facing either bans, beefed-up regulations, or disclosure requirements by pension managers around the country.

There is no evidence that so-called pay-to-play schemes that have erupted in New York have taken place here.

Middlemen are legal, as are their significant fees, unless it can be proven that they were paid as bribes.

Still, the mix of campaign contributions and politically connected brokers calls into doubt Cahill's assertion that the PRIM selection process is devoid of political considerations.

Galvin would not comment on the documents his office received, except to say that he is seeking to make sure the agents are properly registered with his office.

He is questioning whether the agents should be required to register as brokers/dealers or financial investment advisers.