T to ban workers' phone use on the job 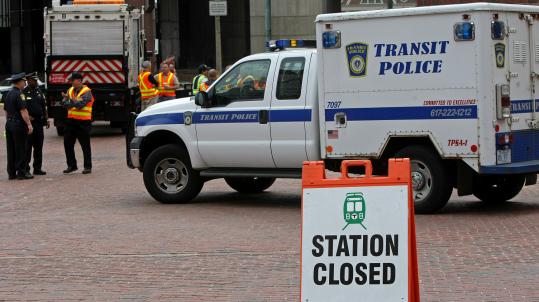 The Green Line was still closed last night at Government Center station. National and local investigators were conducting a series of tests for their report on Friday's trolley crash, which injured dozens of passengers and derailed both trains. (David L. Ryan/Globe Staff)
By Eric Moskowitz Globe Staff / May 10, 2009
Text size – +

The general manager of the MBTA yesterday said he would ban on-the-job possession of cellphones by T operators and would fire anyone caught carrying a phone, pager, or similar device. Officials believe the ban would be the first of its kind in the country.

"Leave it at home. Leave it in your car. Leave it with a friend. Leave it in a locker. But you are not to get on board that bus or [train or trolley] and have a cellphone on your person or in the cab. Period," said Daniel A. Grabauskas. "This is going to be a zero-tolerance policy."

The proposed rule came less than a day after a Green Line operator told investigators from his hospital bed that he was tapping out a text message to his girlfriend just before his trolley slammed into the back of another on Friday night. The crash injured dozens of passengers, derailed both trains, and caused the Massachusetts Bay Transportation Authority to suspend service at Government Center.

Grabauskas worked with state Transportation Secretary James A. Aloisi Jr. and Stephan G. MacDougall, the president of Boston Carmen's Union, to develop the policy. It will be implemented this week, after the T informs employees about it, he said.

The no-phone order would replace a policy allowing drivers to carry cellphones but banning them from talking or texting while on the road or tracks. That policy, created in 2000, calls for a three-day suspension for the first offense - though Grabauskas has the right to fire violators. He said he would terminate the driver in Friday's accident as early as this week, provided the final investigation confirms initial findings.

Aloisi said the MBTA was lucky no one was seriously injured or killed in the accident. Federal investigators recently determined that a commuter crash in a Los Angeles suburb in September that killed 25 people was caused when a train engineer missed a stop signal while texting a friend.

"We don't need to learn any more lessons about this," said Aloisi, who predicted that other states and transit agencies would follow the MBTA's lead. "There's no question in my mind that the initiative that we're undertaking to prohibit the possession of these devices is absolutely the right thing to do and, frankly, overdue."

Officials and union leaders said the policy would not compromise communications in an emergency because cabs are equipped with radios and emergency call buttons.

The National Transportation Safety Board and the T police are investigating Friday's accident. The transit police have spoken with Suffolk District Attorney Daniel F. Conley's office about the investigation, but no charges had been filed as of last night, spokesmen for each agency said.

The T suspended Green Line service between Haymarket and Park Street Friday night, and it remained out as of last night, MBTA spokesman Joe Pesaturo said. Buses were ferrying passengers around the site.

Workers re-railed the cars yesterday to tow them for repairs and began inspecting track switches and signals to restore service through the tunnel, he said. NTSB officials were planning to continue their investigation into the night.

Attempts to reach Quinn at his home yesterday were unsuccessful. On his MySpace page, taken down from public view yesterday afternoon, Quinn described himself as a "chill, hardworking and down to earth guy" who is trying to learn lessons in each stage of life. In one photograph, the trolley driver could be seen smiling in his T uniform.

MacDougall said the union would represent the driver in the event of a grievance. MacDougall said that he considered texting-while-driving inexcusable and that the vast majority of the T's nearly 2,400 bus, trolley, and subway operators would never talk on the phone or text on the job.

"This is not some rampant kind of culture that exists with MBTA bus drivers, trolley drivers, train motor persons. This is the act of an individual that was reckless and callous," said MacDougall, who called the rule change "the right thing to do."

The T has enforced the existing rule with memos and messages, including a "Don't Operate Under the Influence" poster campaign at MBTA work sites.

The cellphone issue gained attention locally last May after a Green Line crash in Newton, although investigators in that case eventually ruled out phone usage as a cause after two weeks of public speculation.

At the time, the Associated Press reported that at least 44 MBTA drivers or operators had been suspended or punished during the previous two and a half years for using cellphones on the job, including one subway operator who was fired.

T officials yesterday did not know the total number suspended since the policy was created in 2000. Since mid-May of last year, five train and trolley drivers and 13 bus drivers had been cited. One bus driver was fired, said Pesaturo.

At a press conference at Government Center yesterday afternoon, a spokeswoman for the national safety board said a team of federal investigators was working with the MBTA to determine an official cause of the crash.

"The NTSB is aware that Bostonians are eager to get the trains running, and we will do everything we can to make this possible," said Debbie Hersman, the spokeswoman. She said the investigation includes tests of human proficiency, track management, and crash signals.

The Green Line - the oldest line on the country's oldest subway system - has tighter turns and affords less visibility than newer systems.

Given "the high level of reliance on the human condition" on the Green Line, MacDougall said, "we need to make certain that we have the public confidence and the public feels safe that everyone who comes to work everyday to operate a Green Line vehicle, a bus, a dual-mode vehicle, a trackless trolley, or a train is operating that vehicle as if their own children, their own spouse, their own grandparents were on that car."