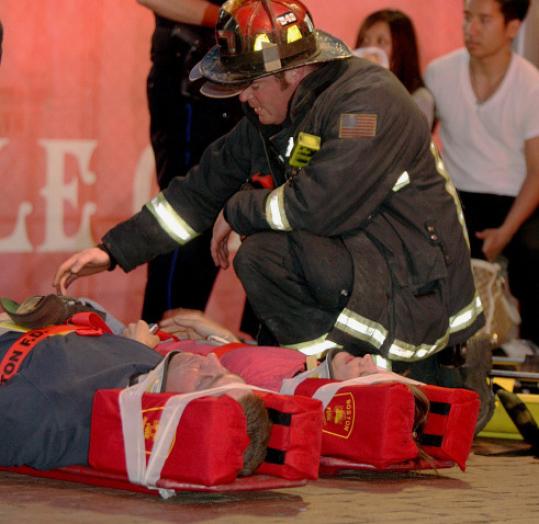 An MBTA trolley operator was sending a text message to his girl-friend when he rear-ended a trolley last night in a crash that injured dozens of passengers and created a surreal scene as emergency workers set up a makeshift emergency area next to a circus tent before taking the wounded to hospitals.

"It's difficult for me to contain my outrage," said Daniel A. Grabauskas, general manager of the MBTA, who learned about the text message sent by a 24-year-old operator soon after the crash near Government Center.

None of the 49 injuries was considered life-threatening, officials said. But the passengers were startled, screaming, and more than a few were bloodied when the collision occurred without warning at 7:18 p.m.

One trolley had stopped at a red light in a tunnel, headed toward Park Street, and was struck from behind by the second one. The speed of the moving trolley was not known.

The operator, who had been on the job 22 months, was text-messaging his girlfriend, according to an official who spoke on the condition of anonymity. The unidentified driver was looking down at his phone and could not apply the brakes quickly enough when he looked up and saw the trolley in front of him, Grabauskas said.

He faces the potential for criminal charges and probably will be fired, Grabauskas said.

"We let our employees know there is a zero-tolerance policy for any type of electronic device," Grabauskas said.

The moving Green Line trolley hit with enough force to jolt the second trolley about 100 feet into the tunnel toward Park Street Station. Both trolleys derailed and sustained significant damage at the point of impact.

Officials described a chaotic scene, with metal strewn about, passengers in disarray, and some people who had to be removed from under twisted metal using saws and excavation equipment. Each of the trolleys, which were headed westbound, contained two cars.

The operator of the moving trolley, who admitted to MBTA police that he was texting and turned over his phone, suffered a broken wrist and was in stable condition at Massachusetts General Hospital, officials said. He had no known disciplinary history during his relatively short tenure with the T, officials said.

"There was just noise and the whole thing went black," said Judy Brenner, a 41-year-old Brookline resident who was heading home on the rear trolley from her job at an executive search firm. "Everyone fell on top of each other."

Several of the passengers were on their way to the Red Sox game. Children in blue baseball jerseys were seen on stretchers, one with a bandage around his head.

Edmundo Silva, a 49-year-old from Medford, was sitting in the front trolley. "There was a big jump, jump, jump," he said, emphatically pounding his fist into his palm.

At that point, everyone fell down, including him. He tried to grab for a pole but was knocked to the floor, injuring his side and leg.

"All the lights went out and everybody just started screaming," said Laszlo Panajoth, 28, whose girlfriend was taken to the hospital with neck injuries.

Brenner said she saw one person with a scalp laceration and, as she spoke to a reporter, she was on her way to get an X-ray at Boston Medical Center. At impact, she fell, hit her head, and blacked out momentarily before fellow passengers woke her.

"It was so black, it was hard to see who was injured the most," she said.

In total, 49 people were taken to hospitals after some were assessed next to the circus tent by City Hall plaza; another 75 walked away on their own, said Steve MacDonald, a spokesman for the Boston Fire Department. Passengers said the response from emergency workers including 120 firefighters was swift.

"We went to a three-alarm just to get enough people here to get people out," MacDonald said.

Eight adult patients who were transported to Massachusetts General Hospital did not have life-threatening injuries, mostly orthopedic injuries to the arms and legs, said Dr. Paul Biddinger, director of operations of disaster medicine at the hospital. The majority were expected to be released last night.

Next door to the crash, at the Big Apple Circus, families were watching the clowns and acrobats, even as ambulances circled them. A public address announcer came on at intermission to tell those in attendance that there had been a crash on the T and that they should not be alarmed, but offered few details of what was transpiring outside the tent.

Chris LaCorte, 26, of Quincy, who was there with his girlfriend and her daughter, said he was surprised when he walked out of the tent and found the area swarming with ambulances, police, media, and emergency medical technicians.

"No one told us how serious it was," LaCorte said. "You hope it was just a train accident and nothing more. You hope everyone is alright."

Service between the Park Street and Government Center stations was expected to resume today.

The four operators of the cars involved in yesterday's crash were expected to be drug tested, as is standard procedure in accidents.

The crash occurred nearly a year after Ter'rese Edmonds, a Green Line operator, died in a rear-end collision during rush hour in Newton. In that May 28 crash, Edmonds's trolley hit the car in front of her. None of the other 200 people on the trolleys was seriously injured. The accident heightened concerns about the potential for rear-end collisions on the line.

Federal transportation safety officials ruled that Edmonds was speeding, that the trolley was going nearly four times faster than it should have been on that section of track. At the time, there had been speculation about text messaging playing a role in the crash that proved unfounded.

Text messaging was blamed for another more serious commuter train crash in Chatsworth, Calif., in September 2008 that killed 25 people and injured 125 others. That crash, in which the Metrolink driver skipped a red light and collided head-on with a freight train, brought national attention to the issue and prompted warnings to transit employees everywhere.

The MBTA's Green Line is a 19th-century antique and the oldest line in the Massachusetts Bay Transportation Authority, which is the country's oldest subway system. It has been under scrutiny for years because of numerous crashes and derailments. Green Line trains are operated manually, and travel closer together and with less input from dispatchers than the Blue, Red, and Orange lines.

In the 1990s, after several incidents, the American Public Transit Association made 17 safety recommendations for the Green Line. A rear-end crash in 1995 at Copley Station injured 32 people. In November of last year, two trolleys collided at Boylston Station, sending seven people to hospitals.

The crash scene
See the chaos after the MBTA accident.
Your comment is subject to the rules of our Posting Policy
This comment may appear on your public profile. Public Profile FAQ