Markoff's fiancée calls off the wedding 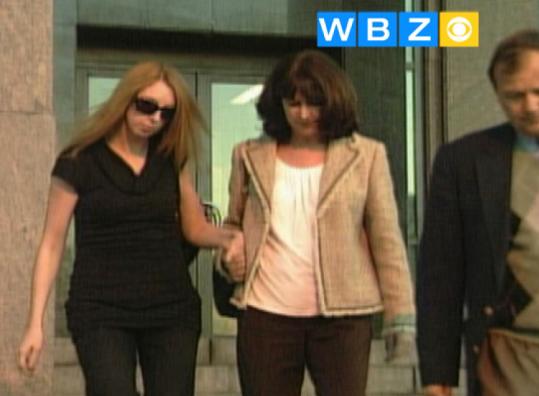 Hiding her face in large, dark glasses and holding her mother's hand, Megan McAllister walked silently out the Nashua Street Jail on Wednesday evening after a 25-minute conversation with her fiancé, Philip Markoff.

By early yesterday afternoon, she was on the Massachusetts Turnpike, driving back to New Jersey with her parents, according to her lawyer, Robert Honecker Jr.

"I don't expect her to return to Boston to see him," Honecker said during a telephone interview.

During her short time in Boston, McAllister picked up some belongings she had left at the Quincy apartment she once shared with Markoff, a 23-year-old Boston University medical student who has been charged with killing a masseuse he allegedly met via Craigslist.

She also visited Markoff at the jail, where he is being held without bail pending his trial. Honecker did not disclose what they said to each other, but one thing was certain: Their wedding in August was off.

The wedding was called off in part, Honecker said, because Markoff probably will still be incarcerated when it was scheduled to have taken place. Most murder cases take about a year to get to trial.

Asked whether the wedding was canceled for other, personal reasons, Honecker said: "It's hard to say, you know. The wedding is off."

Honecker stopped short of disclosing whether the pair had split up, saying he did not know. But he conveyed a contrasting message to McAllister's passionate defenses of Markoff in the immediate aftermath of his arrest, when she insisted the marriage would go forward and they would "share a wonderful, meaningful life together."

"I think that this was a very emotional time for her," Honecker said. "But, in the end, I think this will put her in a place where she'll begin to accomplish other goals in her life and be well."

One of those goals will be to start medical school in the fall in the Caribbean, Honecker said.

"She's a young, bright, articulate young woman. She's a strong young woman as well," he said. "Can you imagine it happening to one of your relatives? I think a lot of people feel sensitive to that and for Megan."

McAllister remains supportive of Markoff, Honecker said, despite the alleged evidence that has been leaked to the media, including that the gun used to kill 25-year-old Julissa Brisman on April 14 showed a preliminary match to the gun found in Markoff's apartment. Markoff pleaded not guilty last week to charges that include armed robbery and murder.

The BU medical student, who has been suspended pending the charges, is accused of preying on prostitutes and other women who advertised services on Craigslist.

"I think that certainly what's been reported in the media is something that will ultimately be tested in a court of law," Honecker said. "And she certainly believes that the fate of Philip Markoff rests in that criminal justice system."

McAllister, who police said was in New Jersey when Brisman was killed, has not been called to testify before the grand jury weighing the case against Markoff.

"She has not been requested to do so," Honecker said. "She had absolutely nothing to do with these allegations."

Police seized at least one of Markoff's computers when investigators searched his apartment, according to a law enforcement official with knowledge of the investigation.

The official, who was not authorized to discuss the case and spoke on the condition of anonymity, did not say what, if anything, investigators found on the computer.

Police continue to search for other possible victims who also might have been lured to hotel rooms through Craigslist. The office of Suffolk District Attorney Daniel F. Conley posted an ad on Craigslist asking people to come forward if they were attacked.

"I am not at liberty to say if anyone has come forward or how many, if any, have come forward," Conley said yesterday in a telephone interview.

No one has come forward since Markoff's arrest on April 20, the law enforcement official said.

As for McAllister, she plans to move on with her life, Honecker said.

"You have a young woman whose dreams of her life to be are no longer there," he said. "She's going to be taking it one day at a time."

Jonathan Saltzman of the Globe staff contributed to this report. Maria Cramer can be reached at mcramer@globe.com.