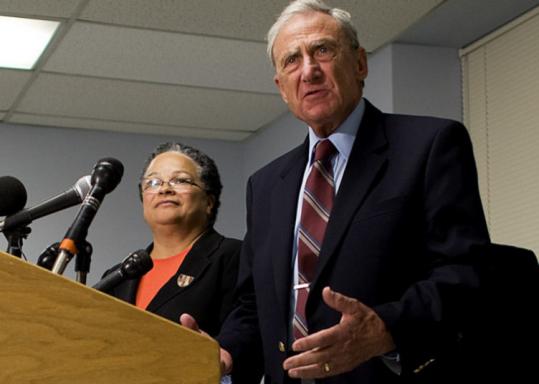 Boston health authorities last night closed the Harvard dental school's treatment clinic, and the university temporarily suspended classes at all three of its major schools on the Longwood medical campus as a precaution after a third-year dental student developed "a probable case" of swine flu.

Disease investigators from the Boston Public Health Commission are reviewing whether the student treated patients at the Longwood Avenue clinic while he was contagious. They are also tracking down any students and faculty members who might have had contact with him. The clinic treats about 50 patients a day, and the dental school has more than 200 students, faculty, and other staff members.

The commission said it closed Harvard Dental Center until the extent of the illness could be determined. The officials said they had also requested cancellation of classes for third-year, fourth-year, and postdoctoral students and urged those students and their teachers and staff to stay home for now.

As an additional precaution, Harvard administrators decided late last night to cancel classes today at Harvard's medical school and school of public health, which, like the dental school, are in the Longwood neighborhood.

"We are all concerned, but there's no need for panic," said Dr. David Rosenthal, director of Harvard University Health Services.

The dental student, who was not identified because of patient confidentiality laws, developed symptoms earlier in the week, began taking the medication Tamiflu, and is recovering, city and university authorities said.

Disease investigators believe that the student is probably ill with swine flu for two reasons: According to Rosenthal, the student is believed to have had contact with someone who had traveled to Mexico, epicenter of the swine flu outbreak. And tests conducted at a state lab showed that he was infected with an influenza strain distinctly different from the types that circulate each flu season. Definitive test results are pending at a federal lab.

Barbara Ferrer, the commission's executive director, said schools are a fertile ground for disease transmission, pointing to the dozens of suspected cases at a preparatory school in New York City.

"You know why it happens easily in the school setting is because students are in very close contact with each other, both socially and physically," said Ferrer, a former school principal.

State officials also said last night that an Amherst College student is suspected of having swine flu and, like the Harvard dental student, is recovering at home.

The developments on the state's college campuses occurred as the number of confirmed cases in the United States topped 100 and as federal disease specialists disclosed that the first doses of a vaccine that could provide a shield of protection against swine flu would not be available until this fall at the earliest.

Instead, the US Centers for Disease Control and Prevention is recommending that production of shots against the seasonal flu - already underway for the upcoming season - continue uninterrupted, said Dr. Richard Besser, the agency's acting director. No final decision has been made on whether to proceed with making a swine flu vaccine.

The strategy appears to reflect disease trackers' continued uncertainty about the potential severity of swine flu, which was first identified in the United States last week, and the possibility that it may yet turn out to be no more dangerous than the seasonal strains.

Dr. Marc Lipsitch, a Harvard School of Public Health epidemiologist, said the decision to proceed with seasonal flu vaccine production is evidence "that garden-variety seasonal flu kills on the order of 36,000 people a year, and while we are in a crisis and it might seem to make sense to ignore that, you can't."

It also opens a window into the complexity and limits of flu shot production, a process that still largely relies on eggs as the growth medium for vaccine. Even with a substantial expansion of production after a 2004 shot shortage, it remains unlikely that pharmaceutical companies could simultaneously churn out hundreds of millions of vaccine doses for both seasonal flu and the swine strain.

"We want to make sure in the vaccine manufacturing that we were still able to protect the country from seasonal flu and be able to protect from this [swine flu] if we decided to do so," Besser said.

A top flu vaccine researcher in Boston said that approach appeared to be the best alternative for authorities, who face a known enemy - seasonal flu - and one that is new and mysterious, swine flu.

"Their decision makes the most rational sense," said Dr. Wayne Marasco, a flu specialist at Dana-Farber Cancer Institute. "We don't know if this new strain is going to be sustainable or burn out. Viruses can break out and then just go away."

Still, another infectious disease specialist cautioned against waiting too long to concoct a vaccine against swine flu.

"Because there's such a long lead time in producing flu vaccine, especially when you're talking about producing such large quantities, you don't have the leisure to wait too awfully long to see how things evolve," said Dr. Benjamin Kruskal, director of infection control for Harvard Vanguard Medical Associates. "But I think that's a really tough call."

Nationwide, infections had been confirmed by federal or state authorities in at least 17 states by last night. Two recuperating Lowell brothers remain the only confirmed swine flu victims in Massachusetts.

Starting today, the state laboratory in Jamaica Plain will be able to test nose and throat samples from patients stricken with classic signs of flu - fever, cough, aches - and determine whether they harbor the swine strain. Until now, suspect samples have had to be shipped to the CDC in Atlanta, delaying results. Also, on Wednesday night, eight tractor-trailer trucks rolled into Massachusetts with 200,000 doses of flu medication deployed from the national stockpile.

Mexico remains hardest hit, with more than 160 deaths, and at the urging of the Mexican government, Boston University has shut its study abroad program in Guadalajara and directed approximately 15 engineering students to return to their homes instead of coming back to campus, said Stephen Burgay, a university spokesman.

"We'd rather not bring them back to campus during the incubation period," Burgay said. "That's the advice we've all gotten from public health authorities."

The Mexico program had less than two weeks left in the semester, Burgay said, and the university will work with students to make sure they complete their requirements and receive credit.

Even as the novel virus continued to migrate around the world, public health authorities tried to strike a balance between urging the genuinely ill to promptly seek medical attention while exhorting patients with minor illnesses - but major fears - to avoid clinics.

"It is important to say, if you're mildly ill and you would not otherwise seek the care of your physician, this isn't necessarily a time to crowd their offices, because that creates problems for people who . . . need treatment," said Dr. Lauren Smith, medical director of the Department of Public Health.

At Cambridge Health Alliance, "we've seen people come in worried that they may have influenza when it's really allergies," spokesman Doug Bailey said.

In places as disparate as Washington, D.C., Atlanta, and Luxembourg, scientists and policy makers struggled with crucial - and vexing - decisions about how to control a virus that has ignited concerns because humans have no natural immunity against it.

Among the most prominent considerations: how to proceed with the creation of a vaccine against swine flu.

At a House hearing yesterday, federal scientists said they had begun growing viral material that could be used for a vaccine.

"The challenge is, and why people are talking about different dates to when [a vaccine] could become available, has to do more with the virus than anything else," said Dr. Joshua Sharfstein, acting director of the US Food and Drug Administration. "There are several steps to make a vaccine and test a vaccine, and each of those has its own uncertainties."

There is the specter of the 1976 swine flu vaccine, which caused severe side effects in a small number of recipients.

"Any vaccine development has to have extra attention paid to safety before it's distributed on a large scale," Dr. Paul Biddinger, a specialist in flu epidemic preparations at Massachusetts General Hospital and Harvard.

Tracy Jan of the Globe staff and correspondent Bina Venkataraman contributed to this report. Stephen Smith can be reached at stsmith@globe.com.